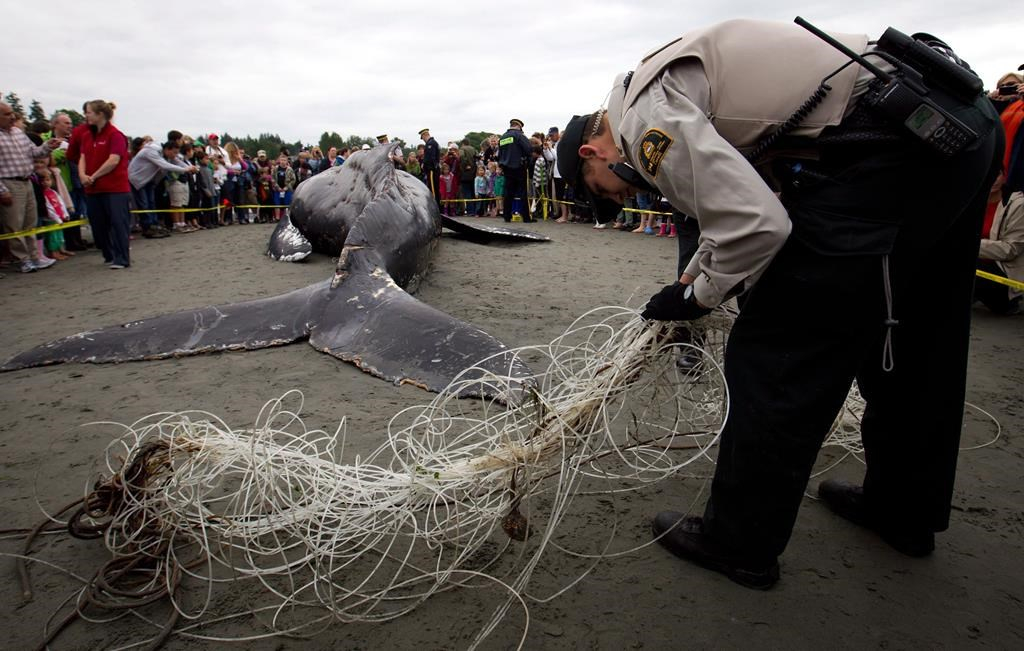 A Department of Fisheries and Oceans official checks a fishing net that was tangled around a beached humpback whale that died during low tide in White Rock, B.C., on Tuesday, June 12, 2012. File photo by The Canadian Press/Darryl Dyck
Previous story

A test deployment of ropeless fishing gear last month off the coast of Newfoundland brought to life a more than four-decades-old dream of biologist Michael Moore — and in a way, the test brought those dreams home.

Moore is the director of the Marine Mammal Center at the U.S.-based Woods Hole Oceanographic Institution, and he said his career has been deeply influenced by the late Newfoundland marine biologist Jon Lien. Lien is known for developing techniques to free whales caught in fishing ropes, and he released hundreds of the animals over the course of his career.

Moore said Lien first told him about the whale-saving potential of ropeless fishing gear four decades ago during a road trip across Newfoundland.

"Forty-three years later, his hope and his prophecy is coming true," Moore said in a recent interview about Lien. "It's very special."

Ropeless fishing technology is still in its infancy, but there are high hopes among scientists and fishers that it will result in fewer whales getting trapped in fishing ropes and help fishers. Efforts to deploy the new fishing methods are focused on the endangered North Atlantic right whale, of which there are only about 336 remaining in the world.

Moore authored a study in 2020 suggesting 85 per cent of right whale deaths between 2010 and 2015 were caused by entanglements with fishing gear. Scientists like Moore hope the widespread adoption of ropeless gear will curb those entanglements and allow the species to recover.

Last month, acoustic technology developed by Jasco Applied Sciences was outfitted on crab and lobster traps that were deployed off the coast of Harbour Breton, N.L., and just outside the St. John's, N.L., harbour. The test run was launched through a partnership between Jasco, the Washington-based non-profit Sea Mammal Education Learning Technology Society, and the commercial fishing arm of the Miawpukek First Nation in Newfoundland.

Fishers can release the traps into the water and find them again through an acoustic signal, Jasco engineering manager John Moloney said in an interview Tuesday. The traps are equipped with inflatable bladders that fishers can trigger when it's time to bring them up to the surface.

Traditional traps are attached to buoys by long ropes that float vertically upward in the water, and passing whales can become ensnared in the lines. Without the long fishing ropes, there are fewer dangers lurking in the water.

Whales also become ensnared in what's called "ghost gear" ⁠ — massive tangles of nets that have come loose and are left to drift endlessly through the water.

Ropeless traps will have a much higher recovery rate than traditional gear, Moloney said. And if a trap is lost, it won't be attached to hazardous ropes, he added.

Jasco technology is also being tested in the United States, Moloney said. Some of those tests involve a group called the Ropeless Consortium, of which Moore is a part.

Both Moloney and Moore said they agreed that the cost of ropeless gear is currently a barrier to its widespread use, but Moloney said Jasco's technology will make it more affordable. He also noted that ropeless traps will last for about 10 seasons, whereas traditional gear is often used for only one.

There are also bureaucratic hurdles in front of the ropeless technology: the federal Fisheries Department has been supportive of its development but still has to figure out how to regulate it, Moloney said.

Still, he thinks the technology is well on its way.

"I do believe that 10 years from now, when you start talking about fishing with ropes, people will just look at you like you're weird," Moloney said. "It will replace rope fishing, for sure."