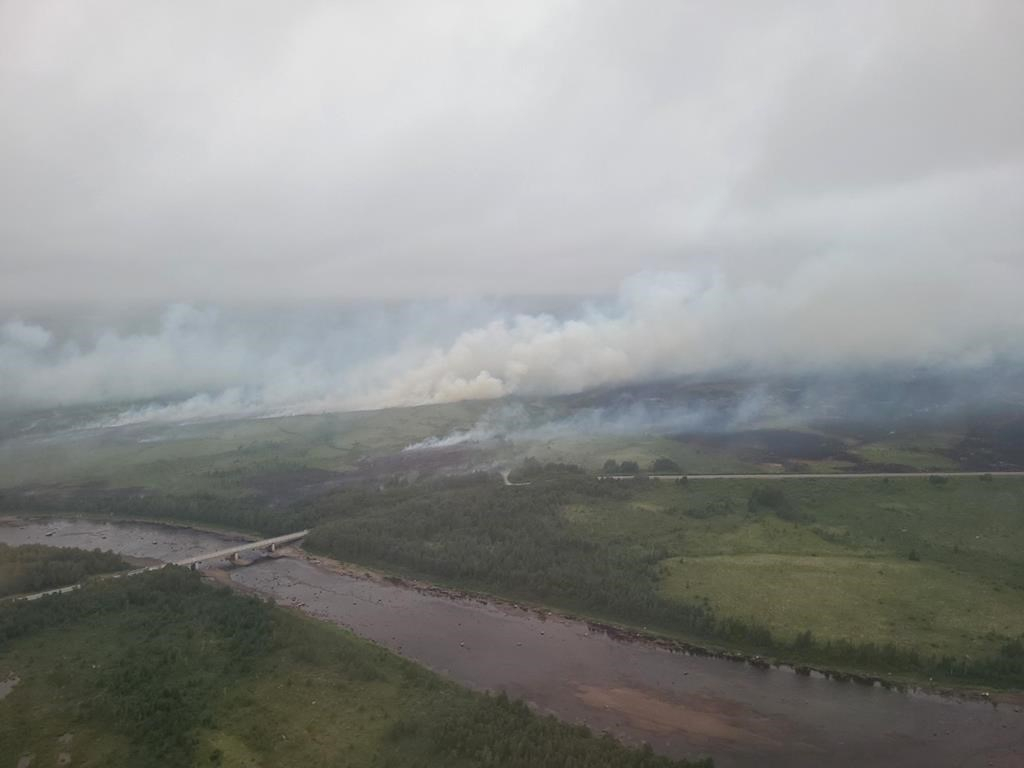 Forest fires that have been burning for more than two weeks in central Newfoundland could be a sign of what’s to come as the province feels the impacts of climate change, a local climatologist says.

Joel Finnis, an associate professor at Memorial University, said Thursday that the conditions that enabled the wildfires in the first place could become more common as the province heats up and its climate changes.

Two large forest fires have been burning since July 24 near the central Newfoundland town of Grand Falls−Windsor and the nearby Bay d’Espoir highway. The fires have intermittently shut down the highway since they first began, cutting off towns along the island’s south coast from the rest of the island and closing a crucial transport route for supplies.

As of Thursday afternoon, the highway remained open as the two fires encompassed a combined area of more than 228 square kilometres. Parts of the island’s south coast as well as towns in the central region, including Grand Falls−Windsor, were under a state of emergency that was first called over the weekend due to smoke and air quality concerns.

Jeff Motty, the province’s forest fire duty officer, said in an interview the fires were triggered on July 25 by lightning strikes during a period of drought conditions in central Newfoundland. The lightning set off five fires in the central region, he said, and crews were able to beat back some of the flames.

"Typically, when we get fires here on the island, approximately 80 per cent are human−caused," he said Wednesday. "When they’re human−caused, you have the ability to get out on the site quickly and suppress them, and they don’t grow that large."

Historically, large forest fires have been more common in Labrador, according to provincial Forestry Department reports. Motty said the situation in central Newfoundland is now comparable to a fire that forced the evacuation of the western Labrador town of Wabush in 2013.

As Newfoundland’s climate changes and average temperatures creep upward, rain is likely to fall less frequently, Finnis said. And when it does fall, it will likely be in shorter, higher−volume bursts.

Those long, dry stretches create fuel for forest fires, he said. And with short, intense storms, more rain is lost to run−off instead of being absorbed by the ground.

#Newfoundland #wildfires could be sign of what #ClimateChange has in store for province. #ForestFires

"You’re just letting things dry out," he said. "Litter at the bottom of the forest gets drier relatively quickly. And then you’ve just got a bunch of material ready to catch when a lightning strike or something else moves through."

Finnis said he would like to see the fires trigger political commitment to curb climate change. He pointed to the recent approval of Bay du Nord, a new oil project off the coast of Newfoundland, as an example of the lack of political willand said the heat waves that swept Europe and Japan earlier this summer should serve as a warning.

"These are things are happening consistently across various parts of the world right now," he said. "It’s all a reminder that we’ve got real trouble on the horizon."

As for the raging fires in Newfoundland, Motty said crews may soon be able to contain them so they won’t get any bigger, noting that temperatures aren’t expected to climb much past 25 degrees C in the coming days, if at all, and humidity is expected to be high.

"Please God, that it comes true," he said.

This report by The Canadian Press was first published Aug. 11, 2022.