MOVIES about saving the rainforest, Idris Elba up against one angry lion and one man's love story amid dementia 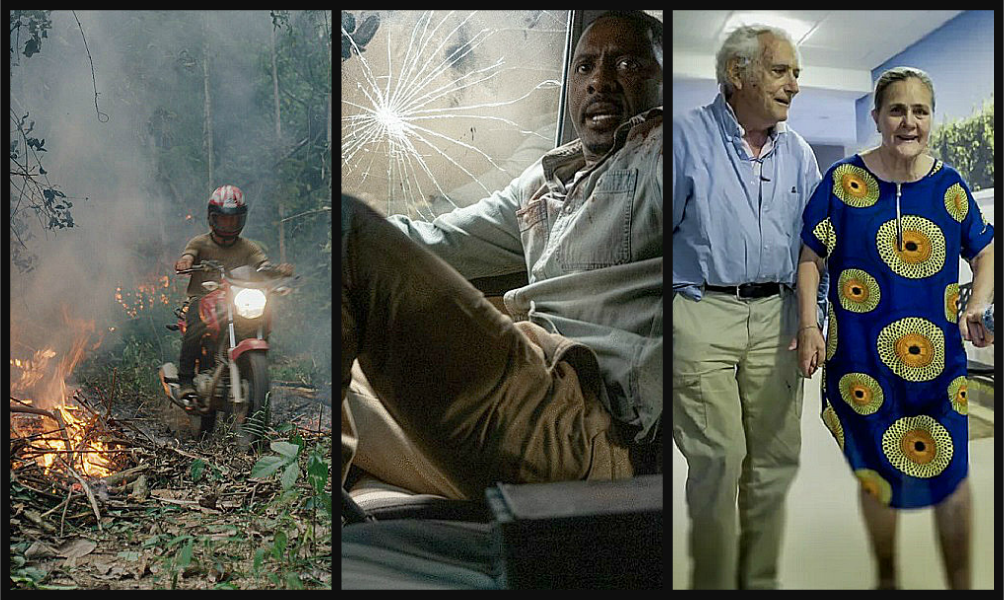 The big film event this week is House of the Dragon. That's the much anticipated prequel to the huge hit Game of Thrones. It goes back 200 years earlier to tell more about the House Targaryen and unlike Game does not deal with several families jockeying for power, just the disputes within that one family. One the creators calls it “Shakespearean.” It too comes from a novel by George R.R. Martin. Names like Olivia Cooke, Matt Smith, Rhys Ihfans and Bill Patterson are in it so we'll see. Its first of 10 episodes starts Sunday on HBO, CRAVE here in Canada, and I'll have to wait too. I received some preview episodes but couldn't open them. Maybe next week.

Meanwhile, these are new …

THE TERRITORY: The second film in two weeks about threats to the Brazilian rainforest is the better of the two. Ainbo which came last week is for children; this one is more serious, and detailed. Its push to activism is stronger and even plays like a thriller. It's been here before, briefly at festivals , and has another chance to be seen. It should be.

Alex Pritz, the New York-based director who also studied environmental science in Montreal, made it over a three-year period. He gained the trust of the Indigenous people there, the Uru-eu-wau-wau. They used to number in the 1000s. Today there are about 200.

They were discovered by the national government only in the 1980s but they're hardly primitives. They have cell phones, motorcycles and drones which they fly to prove from up above what's been happening to their land. Encroachment basically, by farmers, loggers, and apparently miners. The film shows it clearly, hears President President Jair Bolsonaro promise no extra land for Indigenous people and officials claim there's no proof that whites are taking some of what there is.

The film shows a resistance building, led by a 20-year-old firebrand named Bitate and inspired by a long-time activist Neidinha Bandeira. But remarkably, it listens to the other side too. A group called Rio Bonito is backing farmers like Sergio, who says “I consider this land mine.” Indigenous people have too much and they don't do anything with it. They just live there. That's the argument. The film is fair to both sides, though its real sympathies seem clear enough. (A few theaters) 4 out of 5

BEAST: Summer time, vacation, threatening animals, extreme tension, big thrills. They all combine beautifully in this adventure and at the same time re-state an environmental message we've been given before. Don't mess with nature. There's bound to be a big price to pay. Idris Elba finds that out in this movie filmed in South Africa. Poachers kill a whole family of lions, except for the alpha male who turns rogue and comes after any humans he sees for revenge. He attacks and lunges repeatedly in a series of incidents that'll keep you on the edge and not feel safe anywhere, including in your vehicle.

Idris is a doctor who takes his two teen daughters to Africa where he met his wife. She's now deceased and one of the girls has smoldering resentments about that. She blames her dad for abandoning her. He regrets it too: “I wasn't there,” he admits. That's soon put aside when they join up with an old friend (Sharlto Copley), a wildlife officer, who takes them for a tour of the area and talks about the poachers and the rogue. “We're in his territory now.”No waiting: he comes stalking, attacks and a couple of times gets into what looks like a wrestling match with Idris. (Real lion? Special effect? Not for me to say but it looks very real). And the problems keep coming. Wounds have to be treated. The car is wrecked. Can they find a key to grab the poachers' vehicle? You like suspense? It's here, deliberate but fun under the direction of action buff Baltasar Kormákur. (In theaters everywhere) 3 out of 5

DEAR AUDREY: Dealing with Alzheimer's is the theme cited for this film from the National Film Board. I think it's more than that. Yes, it gets emotional a few times but it is no tear-filled downer. It's quite upbeat and at heart a love story, a complicated one, but still a love story. Martin Duckworth tells it about his life and his love for Audrey, who by the time of the film had a form of dementia, but didn't seem to be showing a lot of suffering. She didn't talk and was prone to sleepwalking , even wandering out into the streets in the night. But not, as often happens, complaining or becoming aggressive. Martin, who took care of her until she needed a care home, says her illness reminded him what a great companion she was.

He is a celebrated filmmaker in Montreal. He met Audrey, a photographer, when they were covering a Viet Nam protest in the 1960s . They woke up in bed together the next morning. That's the tone of the story he tells, loving and peppy. She was fearless, he says, when covering civil rights marches and creative shooting photos of their children. We see examples throughout; her pix, clips from his films and some events in their life shown in animation. And we get the whole story. Three marriages for him, a hook-up with her before the second was over, 42 years living together and sentiments like this: “She's still here.” For him it's a heartfelt tribute. For us it's drama, well-directed by Jeremiah Hayes. (In theaters in Calgary, Vancouver, two in Montreal and next week in Edmonton) 3 ½ out of 5

GIRL PICTURE: Teens and sex. In other films it might be loud and lewd. Not here. This is a mature look at the growing-up phase of young women. It's sympathetic and understanding. And it feels real. The, shall we say, salty language alone tells you that. And also what they're after, which they don't disguise with euphemisms. We get that from three friends, on three Friday nights. Mimmi and Rönkkö are best friends, looking for sensation and even dramatic adventure, but, for now, they're stuck working at a smoothie stand. Rönkkö has lots of sex but not much love. Mimmi hopes to find a love affair that's real and wonders if that is what it is when she meets Emma, a figure skater. She's obsessed with the sport but prone to anxiety that makes her miss her lutz jumps. The two meet. Go to a party and start a relationship.

That's the basic outline of the story but there is so much more hanging on every level. You get to know these girls. What they want out of life, what they're insecure about, how they can make mistakes. The film is from Finland. The two writers and the director (Alli Haapasalo) are all women they've imbued this film with a truthful ambience. You won't find what you usually get: a mean rival, sermonizing elders or, well you know the tropes. What you do get reflects modern teen life exactly. You do get a lot of talk about sex from the girls (Eleonoora Kauhanen, Linnea Leino and Aamu Milonoff) and their friends. That feels authentic too. (It on for a second week in Toronto and starts now in Ottawa. Calgary, Edmonton and Vancouver) 4 out of 5