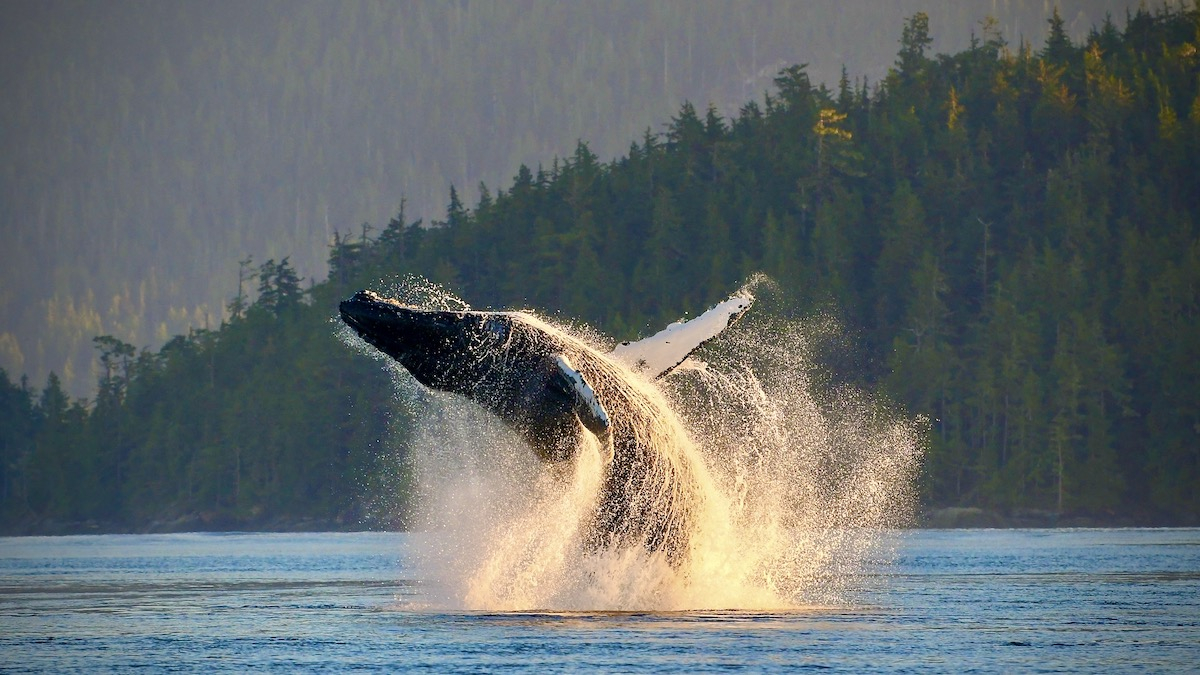 Inukshuk, a humpback known for his singing breaches in the waters off northeast Vancouver Island. Photo by Jackie Hildering
Previous story
Next story

It’s marvellously symbolic that Nick the humpback whale returns year after year with her offspring to the waters surrounding the Discovery Islands, wedged between B.C.’s remote central coast and Vancouver Island.

She frequents the waters off Cortes Island near Whaletown — once a whaling station and rendering plant set up in 1868 as part of a colonial industry that virtually eradicated humpbacks in the waters off northeastern Vancouver Island by the early 20th century.

Now the species is back. Among them is Nick, named for the distinct U-shaped notch in her dorsal fin.

A prolific mother, she’s had five calves since 2008 — the most recent this year, said Jackie Hildering, whale researcher and co-founder of the Marine Education Research Society (MERS).

Isolated sightings of humpbacks were reported in the Georgia Strait again in the mid-1980s, but sightings of the massive marine mammals in the Discovery Islands region have skyrocketed in the past decade, becoming one of the hot spots of activity for the baleen giants in the Salish Sea, said Hildering.

“This area has gone from 23 individual sightings in 2015 to around 100 humpbacks feeding off the Discovery Islands four years later,” Hildering said.

“It’s a rare good news story where we didn’t push humpbacks over the edge and they were able to build a population again,” she said.

The surge in humpbacks in the Discovery Islands and waters of northeast Vancouver Island is not due to population growth alone, Hildering said. But it's still a mystery for whale researchers in the North Pacific as to where the new residents are coming from.

The surge in #humpback returns in the last decade to waters off northeast Vancouver Island, where they were once eradicated by whaling, is an opportunity for redemption and continued conservation, says @OceanDetective Jackie Hildering of @mersociety

Humpbacks in southeast Alaska experienced steep population drops along with survival and reproductive rates tied to an intense two-year marine heat wave starting in 2014 that smothered the Pacific coast and was dubbed The Blob.

However, the humpbacks that went missing from Alaska are not the whales showing up in the waters off eastern Vancouver Island, Hildering said.

The humpbacks’ return to this region offers residents a chance at redemption if we can take measures that will sustain the whales’ conservation. The greatest immediate and preventable threats are still human-caused in the form of boat strikes and entanglement in fishing gear, Hildering said.

Fifty per cent of humpbacks in the region have entanglement scars, she added, noting impacts from boat strikes are harder to determine because whales killed by boats typically sink to the ocean floor. 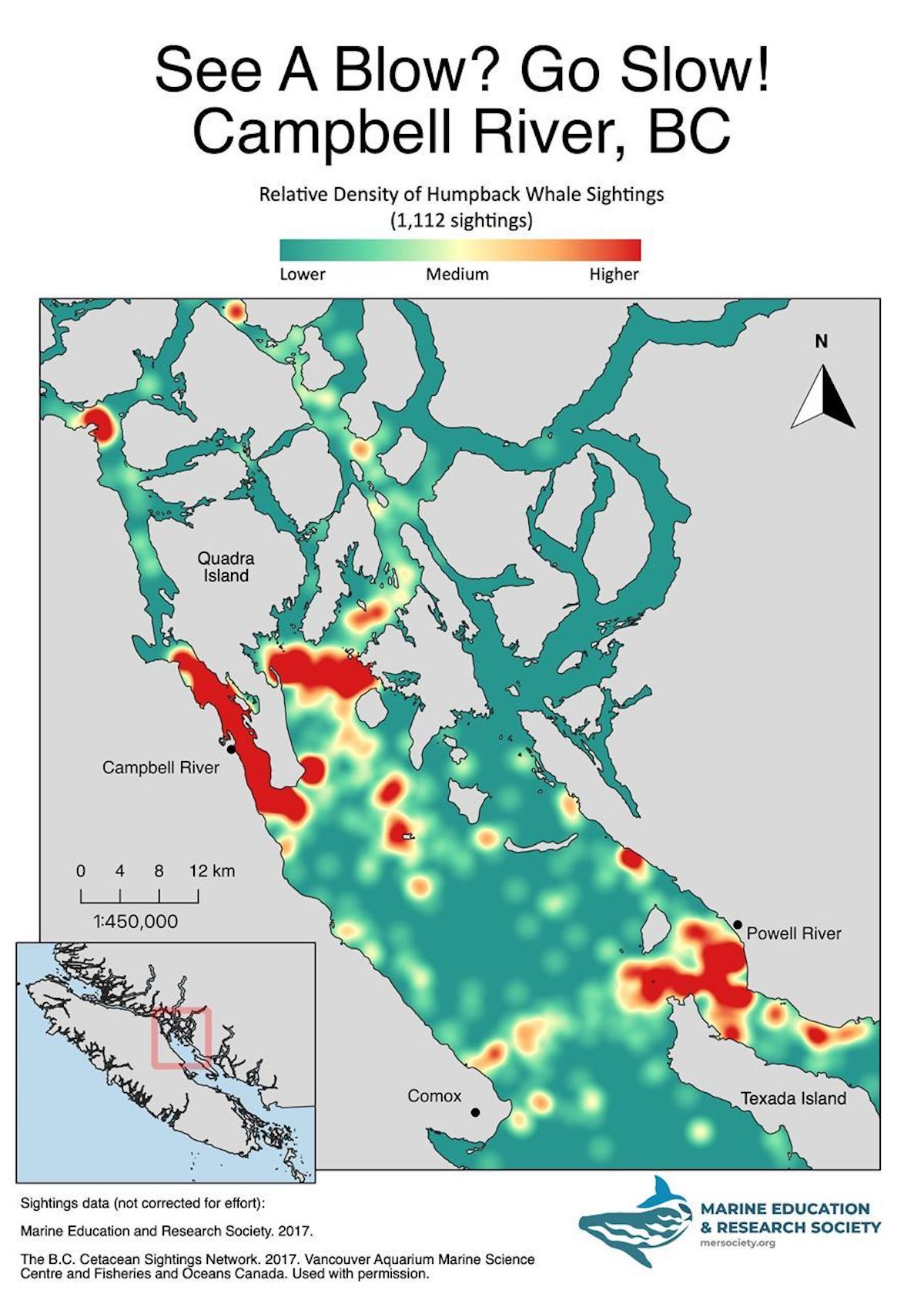 Humpback hot spots are often areas of heavy boat activity, increasing the risk to the resident whales who return to their favourite haunts each summer to forage. Image courtesy MERS

Nick has scars from clashes with gear and a vessel, but has survived to accompany each of her offspring to her favourite coastal waters for their first visit. Calves only remain with their mothers for a year or so.

One of Nick’s recent calves named Splashy, likely born in 2020 in Hawaii, arrived in B.C. that same summer. The young humpback made waves with researchers when it was sighted swimming alone near Hornby Island and nearby waters in the early winter of 2021. The event raises questions about when or under what conditions young humpbacks separate from their mothers and migrate to warmer waters.

This summer, Nick is accompanied by her most recent calf Maite, named in memory of a young victim of the mass school shooting in Uvalde, Texas, in May, Hildering said, noting the 11-year-old had wanted to be a marine biologist.

Humpbacks in the region aren’t just passing through on their way to somewhere else, Hildering said.

She encourages citizens to report humpbacks in local waters and to respect them as individuals and neighbours to help researchers identify specific areas the animals frequent, feeding strategies, survival rates and injuries and how we can better protect them.

The whales come to the Discovery Islands in summer to bulk up on krill and small schooling fish in B.C.’s cool, dark waters before — like many Canadian snowbirds — migrating to spend the winter in Hawaii, Mexico, and possibly, even Central America or Japan.

These destinations feature warmer waters with less food but are safer nurseries for newly born calves, she said.

Resident whales have specific behaviours and preferred fishing techniques adapted to the region, she added.

The area’s waters are characterized by rapid currents that tend to disperse fish, so humpbacks don’t often employ the famed technique known as “bubble-net feeding” — where whales co-operate to corral a school of fish with one member blowing a net of bubbles to prevent their prey from escaping.

The region’s humpbacks, a MERS study found, have developed trap feeding, a sort of lazy man’s version of the more commonly used lunge method where the animals charge a dense school of fish, engulfing them in baleen maws.

This unique method sees whales lounge on the ocean’s surface with their mouths open letting small fish and krill that are fleeing seabirds seek shelter inside their massive jaws.

The humpback then spin or use their flippers to push fish further into their baleen mouths to secure their meal.

The safety of whales and humans improves if recreational boaters and vessel operators are well-versed on local humpbacks’ habits and favourite haunts, Hildering said.

Humpbacks don’t use sonar to hunt and are oblivious to vessels, especially if feeding during the day, and can surface unexpectedly, she said.

Slowing down in humpback hot spots and being on the lookout for other whale indicators — such as flocks of birds on the water or “blow” as the marine giants expel a cloud of moist air when surfacing — helps boat operators avoid collisions with the school bus-sized marine mammals.

The whales have very random travel patterns, so boaters shouldn’t assume humpbacks will travel in the same direction they were headed on their last observed dive, she said.

One whale named Inukshuk, who’s been returning to the region since at least 2008, is notorious for resting for long periods of time on the surface of the water during the day because he tends to feed on krill at night, said Hildering.

It’s worth taking extra care to protect Inukshuk because he’s also beloved for being one of the region’s most well-known vocalists when he sings during the day.

While all humpbacks vocalize, only males sing the complex songs the species is famous for.

But most other males in the area tend to sing at night and so are harder to identify.

Canada's Marine Mammal Regulations state that boaters should stay at least 100 metres away from humpbacks, and double that distance if they are at rest or accompanied by calves.

“We can act on this incredible privilege of humpbacks coming back to our coasts and having a second chance with them,” Hildering said.

This article was updated to clarify that humpbacks in northeast Vancouver Island waters trap feed under specific conditions rather than all the time.