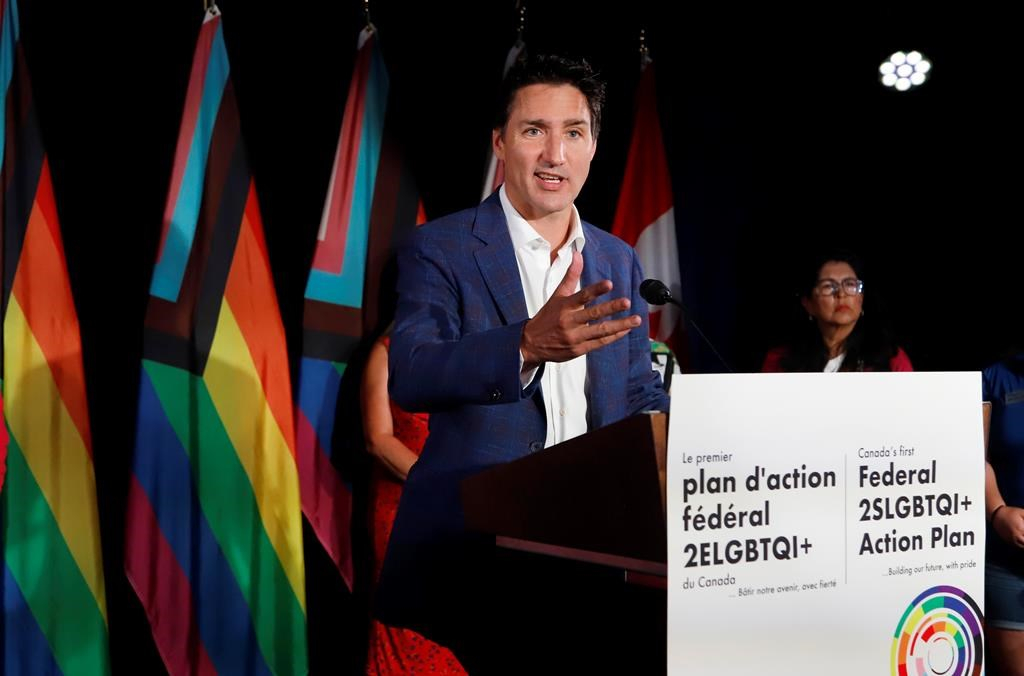 The federal government unveiled what it described as a historic first on Sunday as it announced a five−year, $100 million plan to support LGBTQ, two−spirit and intersex communities across the country.

Prime Minister Justin Trudeau unveiled the strategy, dubbed "Canada’s first federal 2SLGBTQI+ Action Plan," at a news conference ahead of the pride parade in Ottawa — the first in−person march after a two−year hiatus due to COVID−19.

Trudeau said the plan is the first such federal initiative of its kind and said it demonstrates the government’s commitment to fighting discrimination and supporting diversity.

"This … will guide our ongoing work to fight discrimination, break down barriers, to advance rights, and to build a future where everyone in Canada is truly free to be who they are and love whom they love," Trudeau said on Sunday.

Trudeau said 75 per cent of the funding will go toward community organizations focused on diversity and inclusion because that’s "where the real work of support comes from."

"The strength and resilience of your communities should inspire everyone," he said.

The government previously announced in this year’s budget that it would earmark $100 million to benefit LGBTQI+ people. The action plan included details of where the money would go.

More than $5 million of the funding will go toward the launch of a public awareness campaign, while $7.7 million has been earmarked for data collection and community−led policy research to support federal action on LGBTQ issues.

Debbie Owusu−Akyeeah, executive director of the Canadian Centre for gender and sexual diversity, said the strategy was "long awaited and overdue," adding more supports are needed including in schools.

She said Canada has lagged behind many other countries, such as the U.K., Ireland and the Netherlands which already have government action plans.

She said figures from Statistics Canada have shown a sharp rise in hate crimes towards people from the 2SLGBTQI+ communities.

The Prime Minister signaled the government would look at "further protections and support" for people who survived "conversion therapy", which he called "a cruel and dangerous practice" and which was criminalized earlier this year in Canada.

The government is facing calls to tighten the ban to cover practices designed to try to change someone’s sexual orientation or gender identity offered online from abroad, including the U.S.

Wisdom2Action Executive Director Fae Johnstone, who attended the launch, said there was a need to invest in mental−health counselling for people traumatized by the discredited practice.

"Tens of thousands of people were subjected to it and it’s still happening today," she said.

The federal government also signalled that it will look at further legislative changes as part of its action plan. It plans to launch a public consultation on whether to make it illegal to perform cosmetic surgery on intersex children’s genitalia until they are mature enough to give consent.

The strategy proposes to adopt within government the 2SLGBTQI+ acronym, "which is more inclusive and places the experiences of Indigenous communities at the foreground as the first 2SLGBTQI+ peoples in North America."

Marci Ien, minister of women and gender equality, welcomed the action plan alongside Trudeau, saying the funds are for "all of those people who are fighting to be heard … and accepted."

"This is for the people … who are discarded by their family and friends after they came out … to everybody trying to live their truth in rural communities where they feel isolated … this is for the Black queer people who are fighting every day to justify their place in this country, and the trans−women who are afraid sometimes to walk home alone in the dark … this is for you," Ien said.

She said the strategy was created following several years of consultation and research with members of the LGBTQ and two−spirit communities.

Ottawa received more than 25,000 responses in 2020−2021 to a national online survey on how to better serve diverse communities, Ien said.

"The resounding answer was that they needed more direct support … to offer programs … to continue educating the wider public because, again, we can’t legislate kindness," Ien said.

The plan pledges to invest up to $10 million per year in 2SLGBTQI+ projects abroad.

Trudeau said Canada had welcomed thousands of people from LGBTQI+ communities fleeing discrimination abroad and warned of "rights moving backwards in many parts of the world — some closer than we would like to admit."

Michelle Douglas, who won a landmark legal challenge against the Canadian Armed Forces over discrimination against LGBTQ service members, said there was still much work to do to stamp out such practices.

Douglas, a former member of the military police who was honourably discharged in 1989 as part of a "purge" of members of the LGBTQ community, said she also wanted all the records relating to policies toward LGBTQ personnel released.

Trudeau said he was pleased to see the Pride march returning to Ottawa’s streets.

Capital Pride Co−Chair Genevieve Colverson said around 5,000 people were expected at Sunday’s parade, including many families and "allies" of the 2SLGBTQI+ community.

The event included a concert featuring singer Fefe Dobson, a march with floats and a street fair.

This report by The Canadian Press was first published Aug. 28, 2022.

— With files from Virginie Ann in Montreal