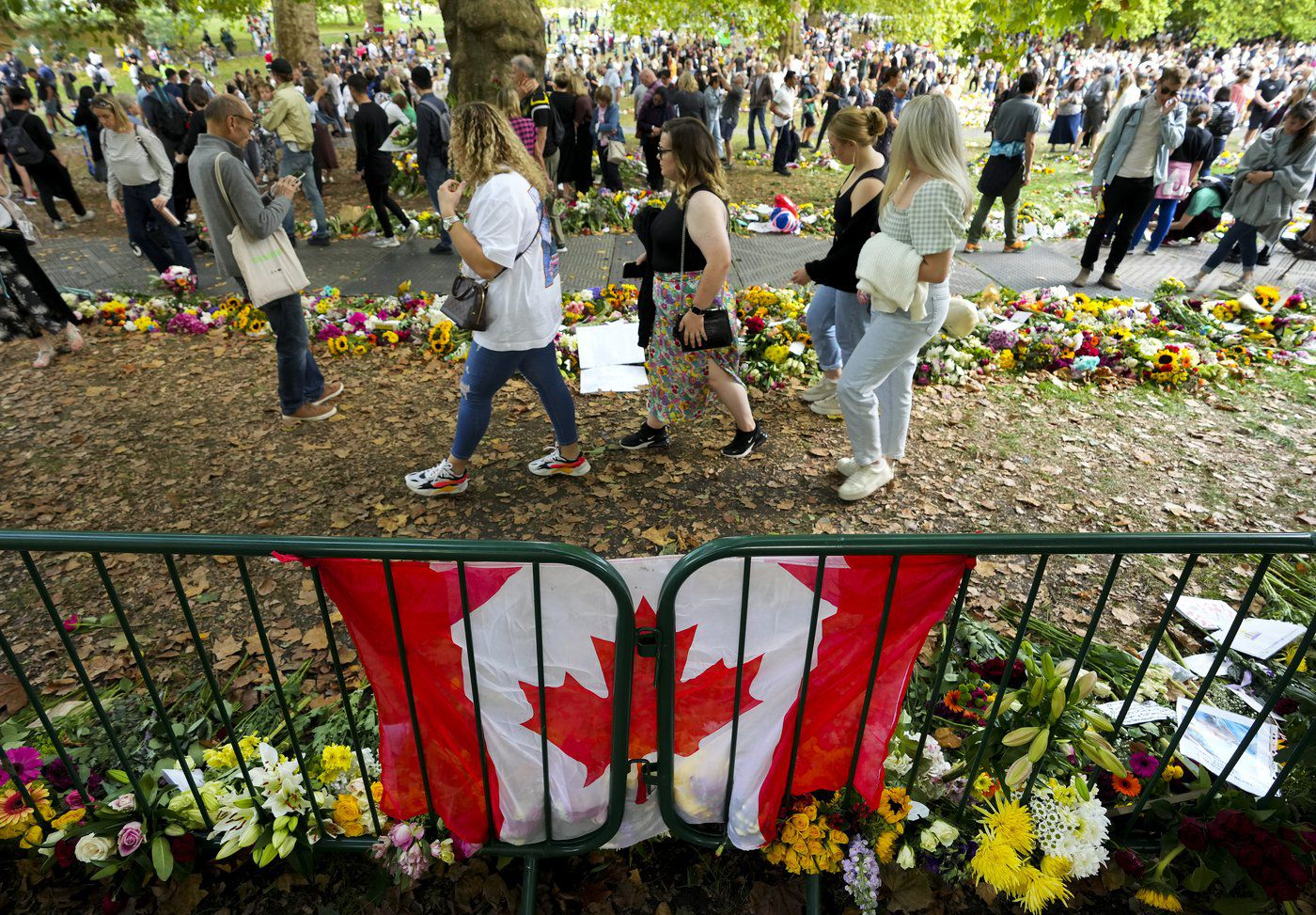 Long lines of mourners form and lay flowers near a Canadian flag as people wait to pay their respect near the gates of Buckingham Palace in London on Sunday, September 11, 2022. Photo by The Canadian Press/Nathan Denette
Previous story

Canada will have a “prominent” role in the lying-in-state and funeral of Queen Elizabeth II, Canada's High Commissioner to the United Kingdom says, as preparations in London shift into high gear with one week to go before the ceremony.

Ralph Goodale told The Canadian Press that members of the Canadian delegation have already started to arrive to manage logistics, with RCMP and armed forces personnel expected to land in the next two days.

"Canada, being one of the most senior countries in the Commonwealth, will be prominent at the beginning of the laying in state and then later on when there will be official visits by the Governor General and by the Prime Minister," he said Sunday in a telephone interview.

The late queen's coffin left Balmoral Castle in Scotland on Sunday, where it was driven by hearse to the Scottish capital of Edinburgh. It will be flown to London on Tuesday, where it will eventually lie in state for the public to say their goodbyes in the four days leading up to Monday's funeral.

Goodale was at Buckingham Palace on Sunday, where he attended a meeting of Commonwealth representatives hosted by the new King Charles III.

While there, he was able to extend condolences on behalf of Canada to the new monarch and "our best wishes to him in his new role as king," he said.

Goodale also thanked the King and his wife Camilla, who now carries the title of Queen Consort, for their most recent visit to Canada in May.

Goodale said the funeral preparations are an "amazing" undertaking for British officials, who have only a week left to finish planning the ceremony for a beloved world figure and co-ordinate the travel and movement of leaders from all around the world who will attend.

He said he will be one of three "official mourners" from Canada, along with Prime Minister Justin Trudeau and Gov. Gen. Mary Simon. Goodale's office is currently working with Rideau Hall, the Prime Minister's Office and other entities in Canada to see how many more Canadians can attend, he said.

He said Canada will also be represented by a large contingent of armed forces personnel.

#Canada to be 'prominent' at Queen's lying in state and #funeral: diplomat. #CDNPoli #QueenElizabethII

"And of course, (the queen) was very fond of the RCMP, so they will undoubtedly have roles to play in the official pageantry of the line of state and then the funeral itself," he added.

Goodale said that even as his office is wrapped up in co-ordinating the planning, he hasn't lost sight of the enormity of the occasion.

The queen "has been a dominant factor in the lives of so many for so long," he said. "And now she's gone. Coming to terms with it constitutes enormous change."

Goodale said it is still too soon to tell exactly what kind of king Charles III will be for Canada, but there are hints that he may be "a little more outgoing and a little less reserved" than his mother.

He noted that the newly-minted monarch went out to greet the public the day after his mother's death, which shows a desire to connect. The accession council — which formally announced the new sovereign — was also televised for the first time, which Goodale sees as a "gesture of being open and inclusive."

"I sense here a person who will want to travel, to connect with people, to be on hand personally as much as he possibly can," he said.

He expects the new monarch will also continue to take an interest in issues that are important to Canada, including climate change, energy and Indigenous reconciliation.

During their meeting on Sunday, Goodale said he and the royal couple discussed their past official visits to Canada, including the three-day trip to St. John's, Yellowknife and Ottawa that took place in May. While he doesn't have the authority to extend an official invitation, Goodale said he tried to "open the door" to future visits and received what he thinks was a favourable response.

"They were very pleased with (the recent visit) as well, and wished it could have been longer, which I took as a signal that they may be coming back pretty soon," he said.

This report by The Canadian Press was first published Sept. 12, 2022.