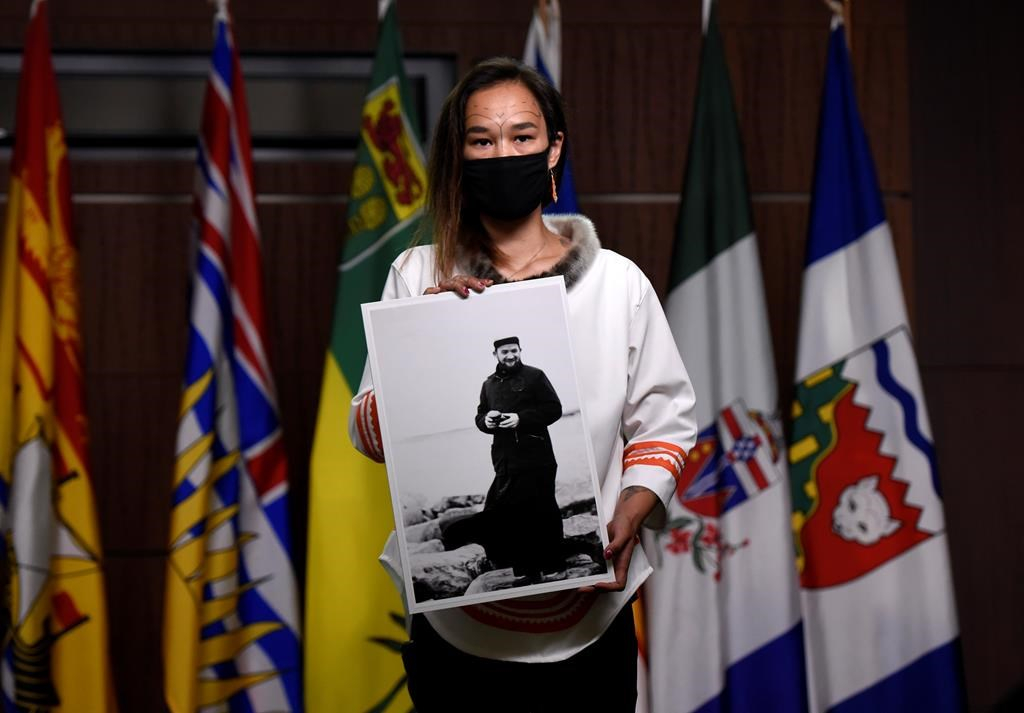 Former NDP MP Mumilaaq Qaqqaq holds a photo of Father Johannes Rivoire, who is wanted in Canada on abuse allegations in Nunavut, but now resides in France, at a news conference on Parliament Hill on July 8, 2021. THE CANADIAN PRESS/Justin Tang
Previous story

LYON, FRANCE — The leadership of a Catholic order in France has begun dismissal proceedings against a priest accused of sexually abusing Inuit children in Nunavut.

A 10-member delegation led by Nunavut Tunnagivik Inc., a group representing Nunavut Inuit, has been in Paris and Lyon this week to seek the extradition of Johannes Rivoire.

They met with French and Oblate officials and with Rivoire himself to try and persuade him to fly back to Canada on an extra seat they booked on their return flight.

At a news conference Thursday in Lyon, members of the delegation said Rivoire denied any wrongdoing and refused to leave France.

Tanya Tungilik, whose late father alleged that he was sexually abused by Rivoire in Naujaat when he was 13 years old, described confronting Rivoire as coming face-to-face with "the monster."

Tungilik said she blames Rivoire for her father's death.

Rivoire, who is now 91 years old and lives in a care home in Lyon, was an Oblate priest in what is now Nunavut from the 1960s until he returned to France in 1993. He has long been accused of sexually abusing Inuit children during that time, with the delegation alleging he abused up to 60 children.

A Canadian warrant was issued for Rivoire's arrest in 1998, but criminal charges related to the alleged sexual abuse of four children in Nunavut were stayed in 2017.

A 10-member delegation led by Nunavut Tunnagivik Inc., a group representing Nunavut Inuit, has been in Paris and Lyon this week to seek the extradition of Johannes Rivoire.

Following a new complaint, Rivoire was charged in February with one count of indecent assault of a girl in Arviat and Whale Cove between 1974 and 1979. Canadian judicial authorities have sent an extradition request to France.

While Canada and France share an extradition treaty, France traditionally does not extradite its citizens, a policy the country's Justice Ministry reiterated when it met the Inuit delegation members in Paris this week. The group has called for an exception in Rivoire's case.

The Oblates of Mary Immaculate said they have repeatedly urged Rivoire to face the charges against him and have written to the Canadian and French governments, as well as the Vatican's Secretary of State.

"We recognize that his painful history continues to affect many Inuit to this day and strongly believe that Johannes Rivoire should face the charges that have been laid against him," Rev. Ken Thorson with Oblates of Mary Immaculate Lacombe Canada wrote in an email.

"We thank the NTI delegates for their courage and conviction in telling their stories, and hope to continue a dialogue on the best course to support their work."

Oblate leadership in France said they have decided to dismiss Rivoire because of his refusal to return to Canada.