Trudeau visits N.L. post Fiona, promises Ottawa 'will be there' to help 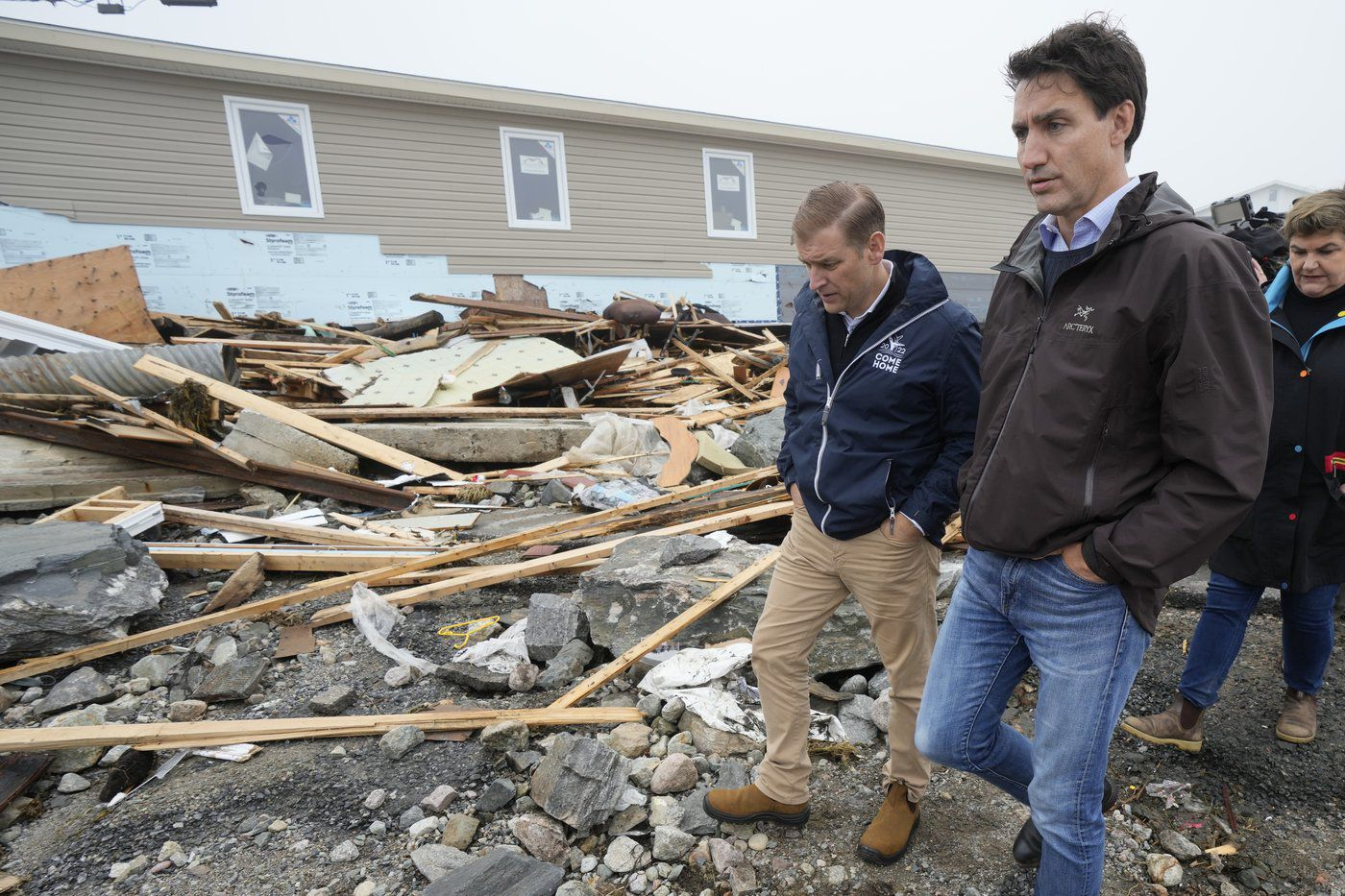 Distraught residents of a southwestern Newfoundland town shared stories of survival with Justin Trudeau on Wednesday as the prime minister got a close look at yet another coastal town shattered on the weekend by post-tropical storm Fiona.

"We barely made it out," Amy Osmond told Trudeau between sobs as she struggled to recount her memories of the day the storm hit Port aux Basques, forcing her to run for her life while trying to grab her dog and keys.

Fiona produced a record-setting storm surge in the community Saturday and winds that reached 140 kilometres per hour or more. Trudeau walked through one of the hardest-hit areas along the waterfront, listening to residents against a backdrop of collapsed houses and smashed plywood.

Standing on a pile of rubble further down the road, Brian Osmond told Trudeau his story of being caught up in a powerful wave and rescued by his brother. The 62-year-old pensioner described his injuries and told the gathered politicians he feels lucky to be alive, but he said he doesn't "want to start over" after losing his home with little money to rebuild.

Trudeau and other politicians promised to support people in Osmond's situation.

"I know that people will continue to work hard to get their lives back together and government will be there," Trudeau said after his tour. "People are trying to get through one day at a time."

Trudeau noted that Canadians have already donated $10 million in disaster relief to the Canadian Red Cross, and he confirmed Ottawa would match that figure. He did not commit to any new funding, but Trudeau said his government would extend the GST filing deadline for affected companies. The federal government will also reimburse up to 90 per cent of the province's relief spending under a program to deal with large-scale disasters, a spokesperson for Minister of Emergency Preparedness Bill Blair said.

"We know that with winter approaching, they're going to need longer-term solutions," Trudeau said, referring to communities across the East Coast left battered by Fiona. "That's why the federal government will be there."

On Tuesday, Trudeau travelled to Prince Edward Island and Nova Scotia to survey similar scenes, but the destruction in southwestern Newfoundland appears to be on a bigger scale. In Port aux Basques, he visited a centre with food and clothing donations and met with volunteers, many of them with harrowing storm survival stories of their own.

Trudeau said Ottawa would contribute to a $30-million relief program announced earlier in the day by the Newfoundland and Labrador government.

"We understand that this may not touch everybody, but it's an attempt to get money into people's pockets who need it the most in this time of distress," Furey said.

Residents have to apply to the program through the Canadian Red Cross, and Furey said the funds will be available as early as Monday to help those who lack insurance or need swift assistance while their claims are being assessed. He encouraged people who slip through the cracks to contact a provincial helpline and explain their situation.

While the exact number isn't yet known, Furey said the province is aware of 75 displaced households in Port aux Basques and more than a dozen in surrounding communities.

The government said $1,000 would be available for every household whose members were temporarily evacuated but are able to return home by Friday. Displaced households whose members cannot return by Friday are eligible for $10,000.

The Canadian Armed Forces had more troops on the ground in southwestern Newfoundland Wednesday, visiting some small coastal communities that have been isolated and without cellphone service since Saturday's storm.

Hours before the prime minister's visit, soldiers went door to door in the same battered neighbourhood to do wellness checks on residents inside.

Cpl. Cassidy Lambert was among a group that drove from the command station to a navy blue house overlooking the sea to drop off cases of water. She said soldiers have come across needs ranging from water to medication such as insulin.

Grade 12 student Nick Billard, a resident of the house where the water got dropped off, said the soldiers have "been pretty good to us so far" with their response.

Debris that covered his home's lawn was mostly cleared away by Wednesday afternoon, but Billard said Fiona's impact on his town still hits hard when he walks out the front door.

"It still doesn't feel right," he said from his front porch. "I'm not used to seeing half the houses gone that I was used to seeing."

This report by The Canadian Press was first published Sept. 28, 2022.