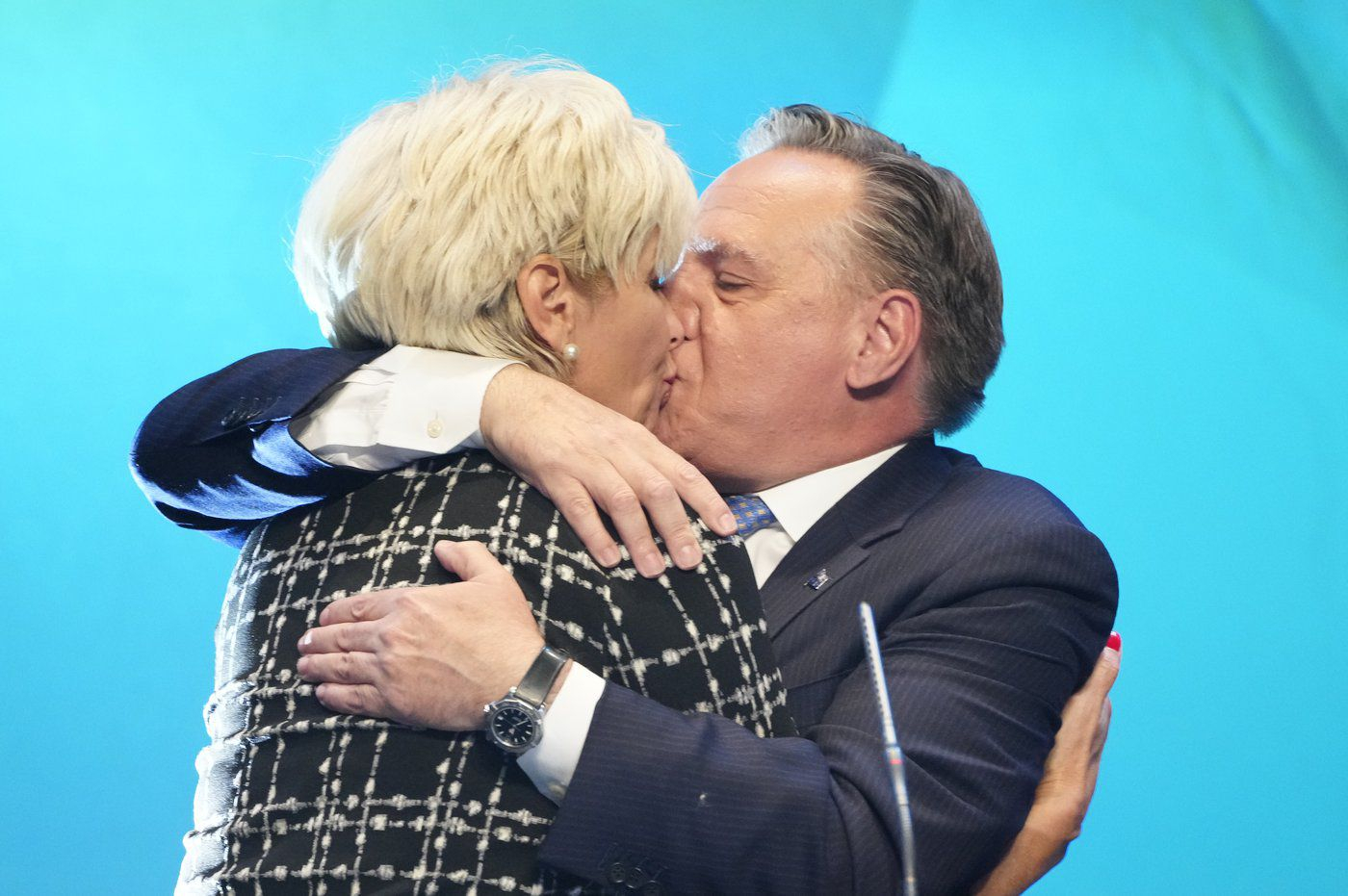 CAQ Leader Francois Legault hugs and kisses his wife Isabelle Brais as he makes his victory speech to supporters at the Coalition Avenir Quebec election night headquarters in Quebec City, on Oct. 3, 2022. Photo by The Canadian Press/Paul Chiasson
Previous story

François Legault will be heading back to Quebec’s legislature with an even stronger hold on power, after a resounding election victory that saw his Coalition Avenir Québec win the most seats of any party in more than 30 years.

As of midnight Legault was leading or elected in 89 ridings, compared to 23 for the Quebec Liberals, 10 for Québec solidaire and three for the Parti Québécois.

A first cheer went up at Legault’s election night headquarters in Quebec City as the party was declared the winner less than 15 minutes after voting closed, and the celebration continued as the victories continued to roll in. Legault was easily reelected in his own riding of L’Assomption.

In his victory speech, Legault beamed as he spoke of a "historic" victory that saw his party elect a record number of women to the legislature, and outlined priorities for a second term that include education, tackling inflation and rebuilding a health system shattered by COVID-19.

But he also acknowledged the divisiveness of a five-week campaign that saw heated debates over the economy, the environment and, especially, the number of immigrants the province should accept.

"In Quebec, all the parties, all the leaders are in favour of immigration," he said. "Unlike what we see elsewhere, here, there is no party that rejects newcomers." Integration into Quebec society "is a mutual gift we give each other," he said, adding that it was his responsibility as premier to protect French.

Legault was forced during the final days of the campaign to rebuke his immigration minister for claiming that most immigrants to the province "don't work" or speak French, as the CAQ leader faced heat of his own for saying it would be "suicidal" to the Quebec nation if immigration levels were raised.

On Monday night, he promised to be the premier for all Quebecers, "of all regions, of all ages, of all origins."

Legault was elected in 2018 on promises to build Quebec's economy and protect the French language. However, the focus of his government turned in 2020 to managing the COVID-19 pandemic, where his approval rating shot sky-high as he held daily press conferences to update the population — even as the province saw thousands of deaths from the virus in long-term care homes.

After an election campaign in which COVID-19 played almost no role, Legault emerges freer than ever to pursue his agenda. It is the most seats any party has won since 1989.

Even some CAQ supporters who gathered at election night headquarters appeared surprised by the speed of the party's victory. Most were still standing near the back of the room when the race was called, but they quickly began to celebrate.

Michelle Dupont, 70, who attended the event with her sister, said she supports Legault because of his charisma, the humanity he showed during the COVID-19 pandemic and his team. “It’s because of the platform, their values. It’s above all the values that connect with me,” she said.

The celebration was more muted at the headquarters of the Liberal party, which retained official Opposition status despite losing seats.

Partisans at Montreal's Corona Theatre broke into chants of "Dominique! Dominique!" when the party was projected to finish second, but it was clear from the long faces that nobody had expected leader Dominique Anglade to pull off an upset victory. She won in her riding of St-Henri-Ste-Anne.

Despite a decline in both seats and popular vote, Anglade appeared all smiles as she addressed supporters. In a brief speech, she thanked her party members, husband and three children, and promised to represent all Quebecers in her next term.

It was a disappointing night for left-leaning sovereigntist party Québec solidaire, which stalled in its bid to vault past the Liberals into the official Opposition. Party co-spokespersons Gabriel Nadeau-Dubois and Manon Massé were re-elected in their ridings. In his concession speech, Nadeau-Dubois urged Legault to take up the fight against climate change, which he described as "make or break."

There was also disappointment for Conservative Leader Éric Duhaime, who had been seeking a breakthrough after his party won less than two per cent of the popular vote in 2018. The party raised its share of the vote to 13 per cent but was not projected to win any seats, and Duhaime lost in his riding.

Parti Québécois Leader Paul St-Pierre Plamondon recaptured a riding his party lost to the CAQ in 2018 to make his entry into the national assembly. But he will be leading the smallest PQ caucus since the party's first election in 1970.

Monday's results are likely to raise further questions about the first-past-the-post electoral system. The Liberal party managed to snag second-place status with fewer votes than either Québec solidaire or the Parti Québécois — and with only about a percentage point more than the Conservatives.

Legault’s win in the 2018 provincial election marked the start of a new era in Quebec politics after nearly 50 years of federalist-versus-separatist two-party rule. This time around, Legault was the incumbent and was offering continuity rather than change.

With the campaign slogan “Continue!,” the Coalition Avenir Québec leader promised to cut taxes, increase seniors benefits and fight the rising cost of living, while facing criticism over controversial comments on immigration, as well as accusations from his rivals that he's not sufficiently concerned with climate change.

His nationalist approach to governing, which consists of asserting Quebec’s autonomy while ruling out an independence referendum, has won him support that has come at the expense of the traditional parties — the Liberals and Parti Québécois.

While in office, he pursued an aggressive agenda that included passing bills to strengthen French-language laws and prevent civil servants in positions of authority from wearing religious symbols on the job — moves that drew condemnation from some business and rights groups but were largely supported by his base.

At dissolution, the CAQ had 76 of the legislature's 125 seats, while the Liberals had 27, Québec solidaire had 10 and the Parti Québécois had seven. The Conservative Party of Quebec held one seat and there were four Independents.

This report by The Canadian Press was first published Oct. 3, 2022.