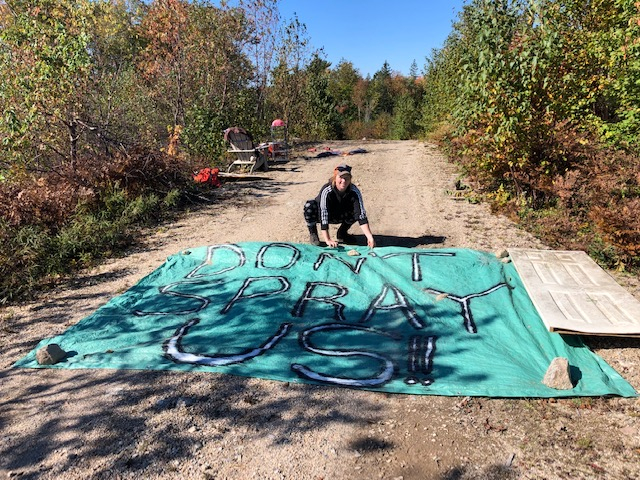 A protester at one of the sites opposing glyphosate spraying in Nova Scotia. Photo contributed
Previous story
Next story

After over a month of camping alongside recovering clearcuts set to get sprayed with aerial herbicide, opponents to the practice have declared a win. The 13 sites people have occupied have not been sprayed with glyphosate, and the yearly spraying period is coming to an end.

Glyphosate-based herbicide spraying is common in the forestry industry, with companies using it to kill vegetation that competes with the softwood trees they harvest. In Nova Scotia, three companies were listed by the province as getting approvals for aerial spraying: ARF Enterprises Inc., J.D. Irving Ltd., and Wagner Forest NS Ltd.

However, occupations in Annapolis, Digby and Kings counties stopped them from doing so. Nina Newington, a member of Don’t Spray! Nova Scotia, said this is the third year the group has banded people together to stop aerial spraying. She said this year, people were especially eager to get on board.

“I think people are really startled… I think one of the things that was different this year was how many communities stood up,” she said.

“It really wasn't like some mass organizing effort … it was once we got the information out there, and we got somebody to make a map that showed all the spray sites. Once people started to see that, they said, 'Uh, no.’”

The province’s Environment and Climate Change Department confirmed the “2022 spray season has ended.” Previously, it told Canada’s National Observer that companies using glyphosate have to follow rules that “ensure safe use” and that Health Canada has evaluated glyphosate “twice in recent years and found it to be acceptable when used according to the label.”

Glyphosate use is being phased out in Europe, which will ban the product come December. In 2021, research from McGill University showed that spraying the herbicide harms freshwater ecosystems.

However, Canada’s federal government continues to approve its use, most recently in January 2019.

In N.S., companies are required to put a newspaper ad in the area where aerial spraying is planned to let nearby residents know and 20 days after that, spraying is allowed to commence. In Annapolis County, ARF Enterprises didn’t list the area on its spray site list, and the spray was cancelled. Newington said it speaks to issues with the regulatory process, and added that the ads are often hard to find or are just posted online.

Ultimately, it’s another win for the campers, but they’re still pushing for a larger end goal: a permanent moratorium on aerial glyphosate spraying in N.S. She notes that sites without protesters in other parts of the province still saw spraying.

The13 sites occupied across Annapolis, Digby and Kings counties have not been sprayed with glyphosate, and the yearly spraying period is coming to an end. #NS

“Most people can’t believe this toxic practice is still allowed,” she said,

“Don’t we know better? Yes, we do. It is time to put a stop to the aerial spraying of glyphosate-based herbicides on forests anywhere in Nova Scotia.”

power to the people. wow

power to the people. wow nova scotia is becoming a climate chaos fight leader. all that practical stuff like Halifax pushing to retrofit old buildings, etc. !!! I envy you from Doug and the destroyers Ontario