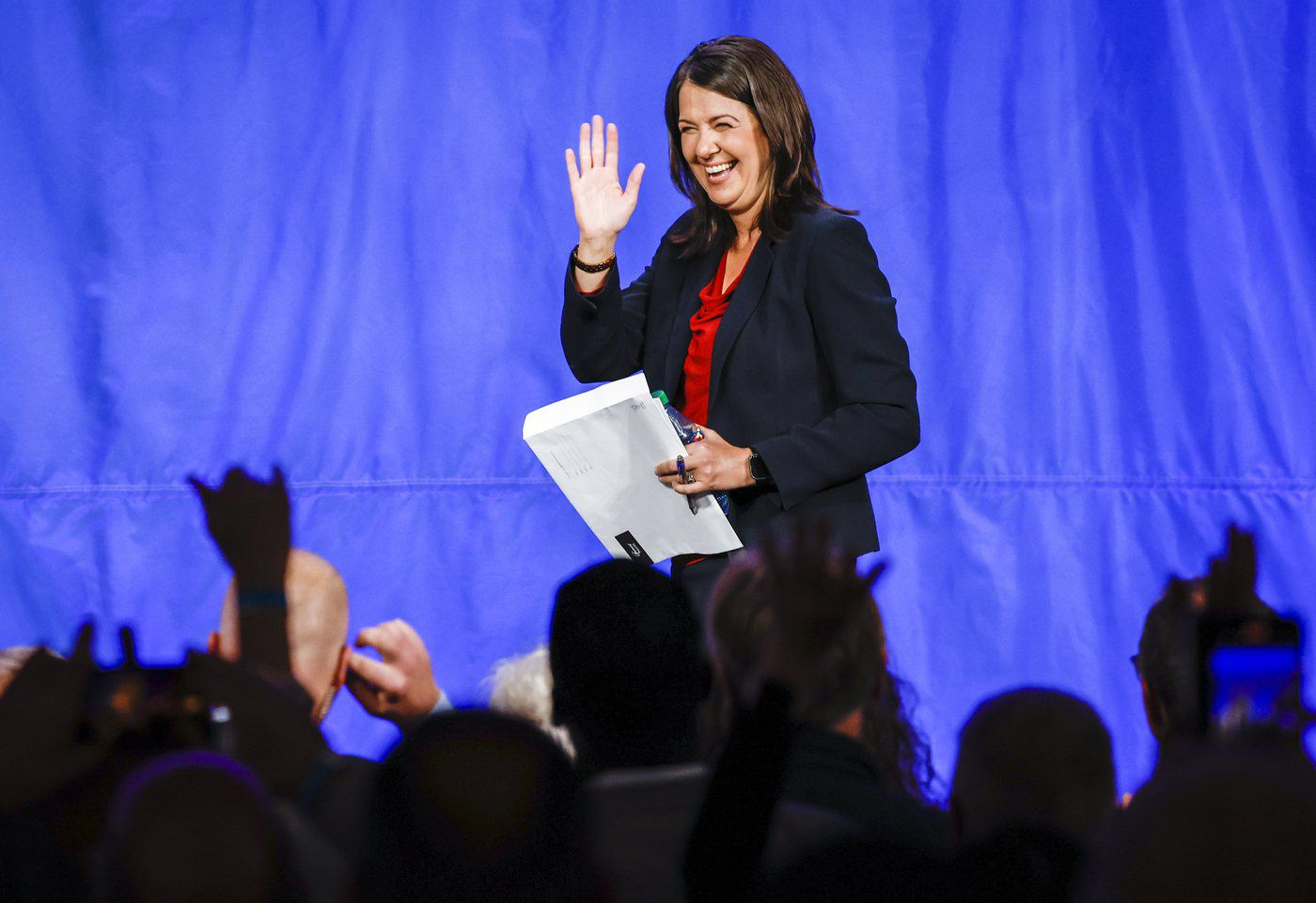 Danielle Smith celebrates after being chosen as the new leader of the United Conservative Party and next Alberta premier in Calgary, Alta., on Thursday, Oct. 6, 2022. Photo by The Canadian Press/Jeff McIntosh
Previous story

The political story of Danielle Smith is one of triumph then defeat, followed by betrayal, banishment and, now, redemption.

Smith, a 51-year-old Alberta-born journalist and restaurant owner won the leadership of the United Conservative Party on Thursday to become its new leader and the next premier of Alberta.

It’s a stunning comeback for Smith, who eight years ago was a reviled outcast in the conservative movement after she engineered a floor crossing for the ages.

“(It’s) unfinished business for me,” Smith said in an interview earlier this week when asked why she decided to re-enter politics.

“After everything I’ve done in the past to divide the movement, then try to bring it together the wrong way, I feel like I owe it to the conservative movement to do what I can to be a force of unity.”

Smith was born in Calgary and got into politics in junior high school, after she told her dad that her teacher was lauding the virtues of communism. Her father had roots in Ukraine, where millions died under Josef Stalin, and gave the teacher an earful. He then ensured politics was discussed around the dinner table.

Smith attended the University of Calgary and found herself entranced by soapbox lectures of conservatives like Ezra Levant and Rob Anders.

She joined the campus Progressive Conservative club and soaked in teachings of the "Calgary School” of economists and political scientists advocating for free markets and small government.

She devoured the works of John Locke and Ayn Rand and got tongue-tied when she met her idol, former U.K. prime minister Margaret Thatcher. She took leadership courses and attended Toastmasters meetings to hone her debating skills and smooth out a public speaking style now considered to be her strongest political attribute.

In 1998, at 27, she won was elected a trustee for the Calgary Board of Education.

It was a short, rocky ride. Smith clashed with the liberal majority on the board and the panel was so fraught with acrimony and dysfunction that the province fired them within a year.

She then moved to media and business advocacy. She wrote newspaper editorials, hosted the current affairs TV show “Global Sunday” and was the Alberta boss for the Canadian Federation of Independent Business.

By 2009, politics was calling again. A rift was widening in Alberta’s conservative movement.

The Wildrose Alliance, later the Wildrose Party, was hiving off members and money from the governing Progressive Conservatives, under then premier Ed Stelmach.

The PCs, they said, had forgotten their roots, delivered top-down decisions and indulged in profligate spending that delivered multibillion-dollar deficits as oil and gas prices hit the skids.

Smith agreed change was needed and won the Wildrose leadership, telling cheering supporters in her maiden speech: “Ed Stelmach, you haven’t begun to imagine what’s going to hit you!”

The Wildrose grew under Smith and poached floor crossers from the PCs, who in turn kicked Stelmach to the curb and installed Alison Redford as premier.

In the 2012 election, Smith and the Wildrose appeared primed to end the PC dynasty.

But there were late-stage mistakes. Smith questioned the science of climate change and refused to sanction two candidates for past remarks deemed homophobic and racist.

When the votes were counted, Smith and the Wildrose lost to the PCs but captured 17 seats to become the Opposition.

Smith began trying to rebuild the party brand and reached out to marginalized groups.

The Tories, meanwhile, continued their descent into infighting and disarray. Redford quit in 2014 amid scandal and was replaced by former federal Conservative cabinet minister Jim Prentice.

As Prentice took over, the Wildrose began to fray. The party lost four byelections to the PCs, then Wildrose rank-and-file voted to roll back a policy to respect all Albertans regardless of differences, such as sexual orientation.

Some of Smith’s caucus began bolting to Prentice and eventually Smith agreed: if the goal was to keep the conservative movement strong and Prentice would give them what they wanted, let’s roll.

A week before Christmas, Smith led eight more members across the floor, leaving five shell-shocked Wildrosers and staffers getting pink slips for the holidays.

“Tighty Righties” was one cheeky tabloid headline at the time that appeared beneath a photo of a beaming Prentice and Smith.

The fallout was swift and merciless. Smith and the other crossers either didn’t win their PC nominations or their seats in the 2015 election.

Rachel Notley and her NDP won government for the first time ever, taking advantage of vote splitting between the Wildrose and PCs in key Calgary constituencies.

“It was not easy deciding to stay in the public eye after what I’d done and the visceral reaction people had,” said Smith.

“It was unpleasant the first three months I was on the air — the texts and the emails that came in and the people who were so furious at me.”

It was three years before she began attending conservative meetings again, after a friend told her: "you can’t keep hiding."

"I had dear friends from my Wildrose days that I’d go in for the hug and they’d give me the hand, or they’d walk away," Smith recalled of the first few events.

“It was a seven-year process of trying to get people to forgive me. Not everyone has, but a lot of people have.”

Smith said she never discounted running again for premier, but figured Jason Kenney had a long-term lock on the job after he united the PCs and Wildrose in 2017 to form the new United Conservative Party.

Kenney won the UCP leadership, then made Notley’s NDP a one-and-done government in 2019.

When Kenney quit over caucus and party discontent in May, Smith said she decided to run by courting the UCP base — rural members frustrated with Ottawa, mainly over health restrictions during the COVID-19 pandemic.

She was an agent of chaos and confrontation, promising to pass a law allowing Alberta to ignore federal laws deemed offside with its constitutional prerogatives. She pledged no more health restrictions or COVID-19 lockdowns and promised to fire health board members en masse.

As premier, she must now pivot to make the UCP palatable to the broader population, quell a divided, angry caucus and answer the question of whether politician Danielle Smith 3.0 can break her pattern of splashy political entrances and even crazier exits.