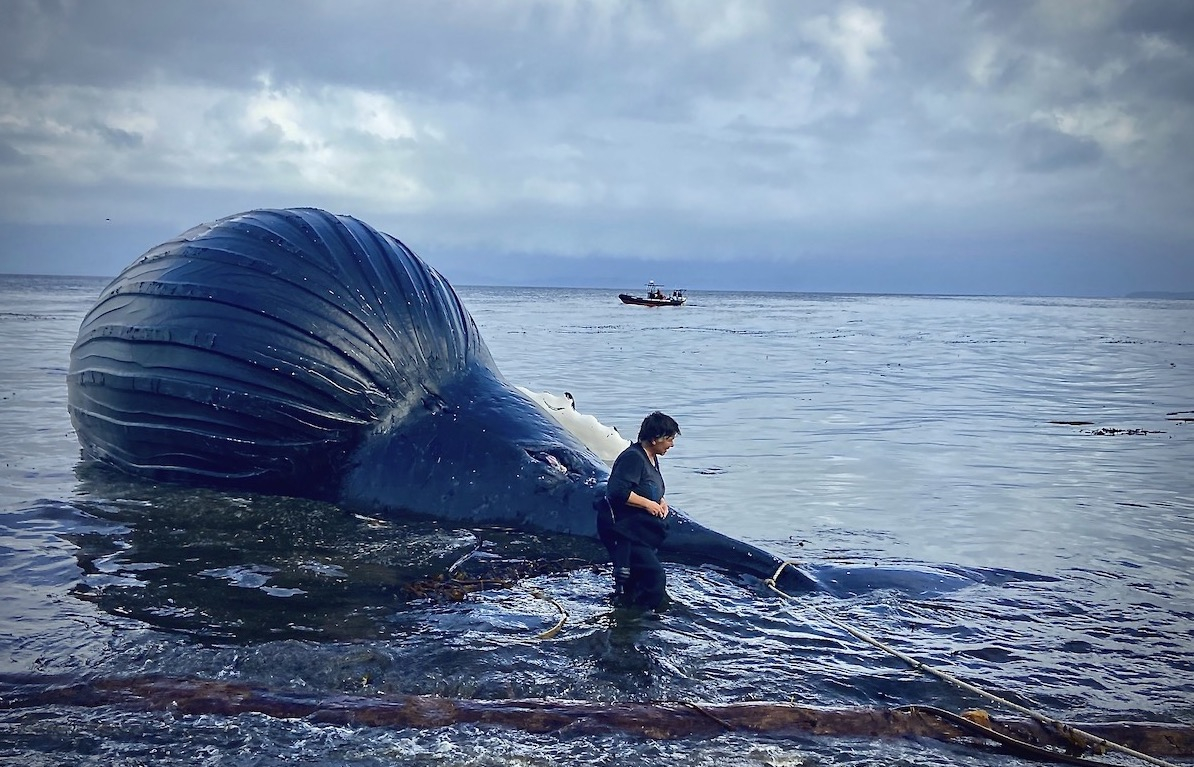 Jackie Hildering of the Marine Education and Research Society wades in the waters of B.C. to secure the body of a young humpback whale named Spike. Photo by Emily Cowie / Courtesy of MERS
Previous story
Next story

When a humpback whale dies, it is — and should be — personal, says Jackie Hildering of the Marine Education and Research Society (MERS).

A young female humpback named Spike was found dead in the shallows of Malcolm Island off the northeast coast of Vancouver Island, B.C., on Sunday.

Hildering and her MERS colleagues responded in the bluster and rain to identify and secure the whale in hopes of determining her cause of death.

It was a sad sight, with the young whale badly bloated from the buildup of gas, said Hildering, who braved the frigid water to wrap a line around the humpback’s tail while its body was thrashed by the surf.

“We get to feel the depths of emotion that result from knowing these whales as individuals.”

MERS works to identify and monitor individual whales in the northeastern Vancouver Island region and educate the public about reducing threats to marine mammals and conserving their ocean environment.

The team's researchers are well-acquainted with humpback BCX1847 — named for dinosaur-like markings on her tail after the Stegosaurus, or “Spiketail,” character in the animated feature film series The Land Before Time.

“It’s important people care about whales as individuals because that helps us evolve in understanding how our actions impact them as representatives of the ecosystem," says Jackie Hildering @mersociety on the death of a young humpback named Spike.

A necropsy by Fisheries and Oceans Canada (DFO), expected to take place within the week, will hopefully confirm the cause of Spike’s death, Hildering said.

But it wouldn’t be surprising to discover she died from blunt force trauma after being hit by a boat, Hildering said, adding two other humpbacks were recently found dead of suspected ship strikes in Washington state, just south of B.C.

Spike — first sighted in 2018 and a regular summer resident of the waters north of Port Hardy — is part of a surge in the humpback population in the waters off northeastern Vancouver Island over the past decade. The massive marine mammals were almost wiped out in the region by whaling in the last century.

Malcolm Island residents Andrew and Lori Pinch found Spike and reported the whale’s death so MERS could respond. The 'Namgis First Nation has been informed in case they want to conduct a spiritual ceremony, Hildering said.

It’s important that people who see a marine mammal dead or in distress report it to the DFO Incident Reporting Line at 1-800-465-4336.

Speedy reports allow specialists to rescue an animal without further endangering it or researchers to monitor what diseases, environmental changes or human-caused factors are affecting marine mammals such as whales, she said.

Human-caused boat strikes and entanglement in fishing gear are the greatest preventable threats that whales face, so if people care about whales and rightly think about them as neighbours and individuals, they are more likely to take precautions necessary to protect them, Hildering said.

MERS shared the images of Spike’s body on social media so the public can better understand the risks humpbacks and other marine mammals face, she said.

Most whales’ stories are lost when they die, as they typically sink to the bottom of the ocean after death, she added.

“Spike is an ambassador for her kind,” Hildering said.

“It’s important that people care about whales as individuals because that helps us evolve in understanding how our actions impact them as representatives of the ecosystem.”

So is it OK if I respond to

So is it OK if I respond to this the way I would if Spike were human? As in "Well, it's sad, but I never met the guy."

But you wouldn't say that to

But you wouldn't say that to a colleague (let alone a friend) whose mother or brother you never met.
Taking care of a living being, human or otherwise, is likely the only antidote for the kind of individualism we seem to have bred in far too many people, the kind that says, "My only responsibility is to myself; nobody counts but me." (And yeah, that gets extended to "I look after *my* family" and so on. But it leaves out what must be considered for a thriving society, which is understanding that "everyone else" counts too.
While everyone's busy competing against the next guy, too few take into account that the neighbour isn't our enemy: that the enemy is as much within as without. Pun intended.