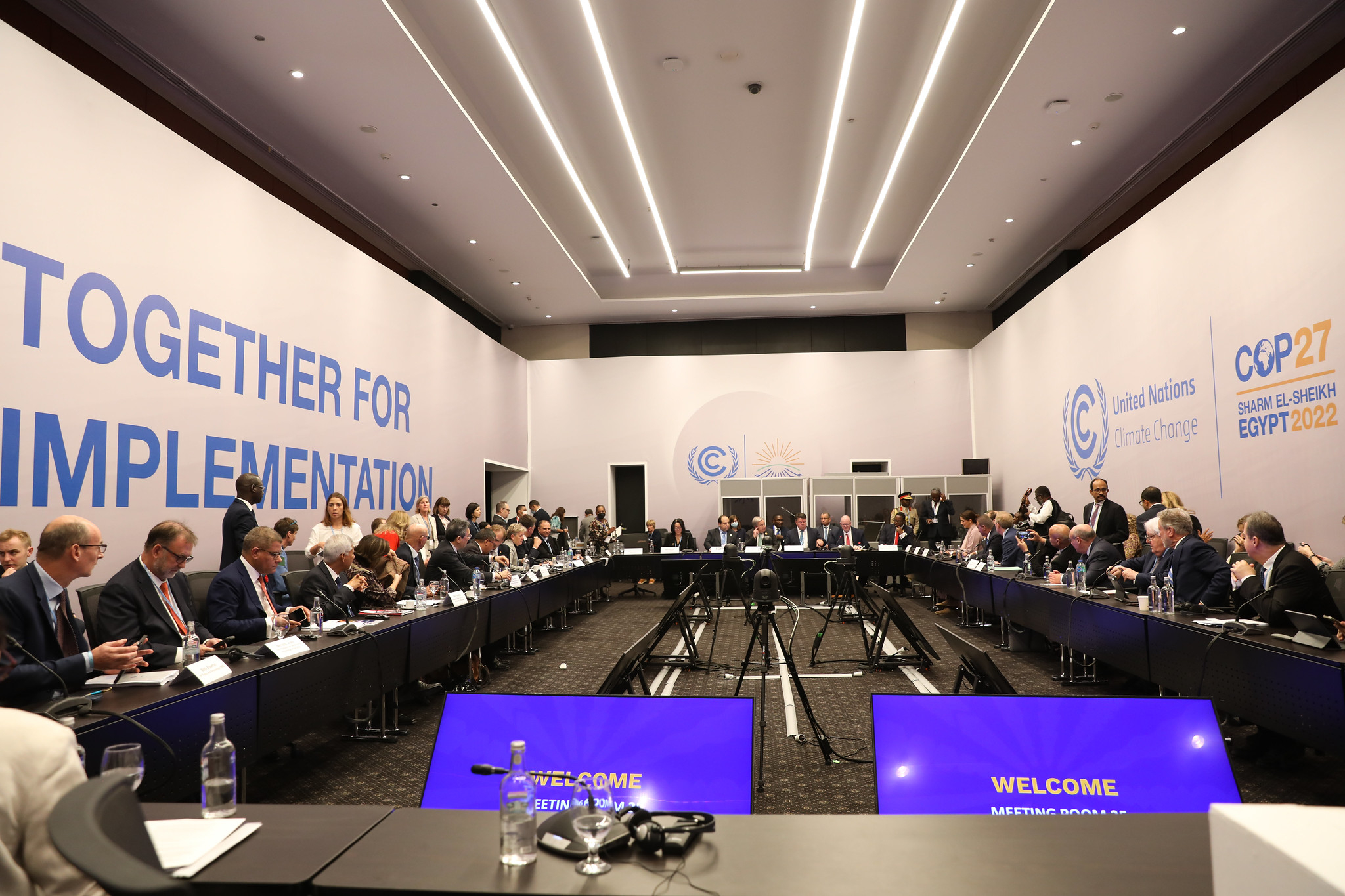 At the 2022 United Nations climate change conference, COP27, each country must set out what it has done and intends to do to limit the increase of the global temperature to 1.5 C. Photo via UNFCCC / Flickr (CC BY-NC-SA 2.0)
Previous story

The world in 2022 is profoundly different from the one we knew just a few years ago.

After a devastating pandemic, we are now grappling with a global energy crisis, triggered by Russia bringing war back to Europe and weaponizing its energy supplies, cutting off customers and destructively burning its spare gas. Against this backdrop, the climate crisis is getting worse by the day. Global warming is fast approaching the 1.5 C level we pledged to avoid. This is a tipping point that threatens lives and livelihoods across our entire planet.

The disruptive and increasingly lethal effects on every aspect of life are by now beyond doubt. From our degraded ecosystems, disappearing forests, collapsing glaciers and receding shorelines, to fires, heat waves, floods, storms and drought, the changes we face are inescapable.

No individual can stop climate change. No vaccine will come to the rescue. Yet, rather than fuelling despair, apathy or resignation, we must create hope and show determination to act for climate. The solutions and technologies are well within reach, but we must plan, invest decisively, and most importantly, act now. Time is of the essence.

At the 2022 United Nations climate change conference, COP27, each country must set out what it has done and intends to do to limit the increase of the global temperature to 1.5 C. In the European Union, our commitments are enshrined in law: we will cut emissions by at least 55 per cent by 2030 and reach climate neutrality by 2050.

We in the European Union are eager to hear how others are delivering on their own climate ambition. In Europe, we have been forced to put exceptional measures in place to cope with the energy crisis provoked by Russia’s war of aggression against Ukraine. We have also been forced to postpone the decommissioning of some coal-fired power plants as a temporary emergency measure for the coming winter. But, while the use of coal has temporarily gone up in a number of European countries, national coal phaseout dates remain unchanged.

We are implementing much stricter energy efficiency targets and will move to adopt renewable energy much more swiftly, using less gas than initially expected. Our overall climate commitments are, therefore, not in jeopardy. In fact, we have increased our ambition for renewables deployment this decade.

Some voices have called on us to be “realistic” and put climate action on the back burner as there are other crises to deal with. But the current energy crisis can be tackled through climate action. It is Russia’s unjustified war of aggression in Ukraine and expensive fossil fuel imports that are pushing our energy bills up. In Europe, this has increased our citizens’ appetite for getting rid of fossil fuels as fast as possible.

As climate change progresses, millions around the world are at risk of losing their homes, water supplies, livelihoods and even their lives. This unfortunately is also the case in Europe and in Canada, where we just recently witnessed the devastating storm surges along the Atlantic coast. Around the world, we need to both accelerate mitigation measures and tackle the problem at the source. In parallel, we need to do more to support adaptation to climate change, and to avert and address loss and damage.

The European Union continues to be the world’s biggest humanitarian aid and climate financing donor, providing almost US$28 billion in 2020 alone. European countries will intensify their efforts, but we cannot solve this crisis alone. The efforts and buy-in of all countries are needed, especially major emitters, alongside a massive mobilization of private financing to complement public funds.

European countries will intensify their efforts, but we cannot solve this #ClimateCrisis alone. The efforts and buy-in of all countries are needed, says Melita Gabrič @EUAmbCanada #COP27 #climate #SharmElSheikh #ClimateAction #cdnpoli #NetZero

It’s time for action. We must now go beyond pledges and deliver results. We must demonstrate success through implementation, influence our peers and persuade actors at all levels — from the UN to the individual — to do their part. The European Union and Canada are leaders in this regard. We remain determined to work together and urgently step up the global transition to a green, carbon-neutral grid.

The European Union will continue to deliver on its climate finance commitments to help developing countries adapt to climate change and achieve their climate goals. The European Union and Canada are joining forces to ensure an ambitious outcome of the negotiations of the post-2020 Global Biodiversity Framework and remain committed to the transition to more resource-efficient and circular economies.

For centuries, we have drained the planet of its resources and now the planet is reaching its limits. It’s time for us to stop the damage and prevent Earth from becoming uninhabitable for humankind.

Future generations will judge us by what we do — and also by what we don’t. So let’s use COP27 to do the right thing, now.

Dr. Melita Gabrič is the ambassador of the European Union to Canada