MOVIES with Ralph Fiennes and a weird Menu, Guillermo del Toro's slant on a classic children's story and a Disney update on another 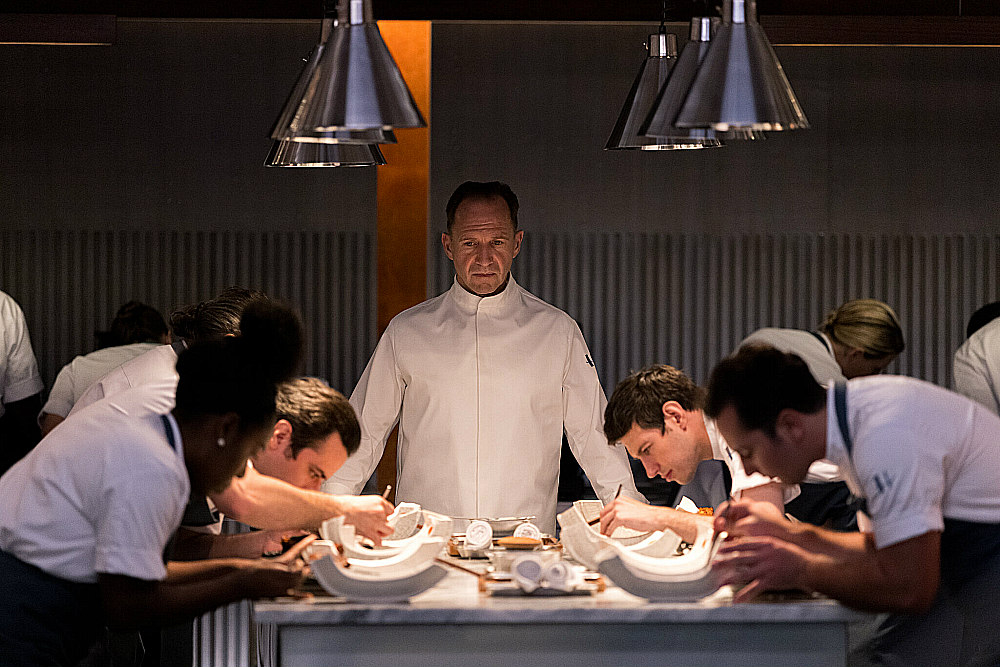 Most of the new films this week are worth your time. But there are a few I don't have here today. For one reason or another they weren't available to preview.

Bardo, for instance, described as a surreal black comedy about a mid-life crisis by a famous Mexican director, Alejandro G. Iñárritu. Or Spirited, a reworking of A Christmas Carol starring Ryan Reynolds and Will Ferrell. A review in the New York Times called it a “tedious comedy.” Or She Said about that same newspaper's exposure of the Harvey Weinstein story.

All three are playing now, in theatres or via streaming.

THE MENU: Weird but very clever was my reaction here. This film is funny then tense, intriguing then close to a horror tale. Ralph Fiennes himself brings on all those moods, flavors perhaps, as a chef who runs a very exclusive restaurant on a remote island. He supervises a team of cooks who obey him like army privates. He serves a multi-course meal and precedes each one with a description and a signifier. “Don't eat” he says. “Savor” Also, he explains why there's no bread served. Throughout history bread has been for the poor.

His guests, 12 of them, are not poor. They've each paid $1,250 for the meal and the experience. Anya Taylor-Joy and Nicholas Hoult are a couple; John Leguizamo is a once-famous actor, Janet McTeer is a food critic who uses pretentious phrases, three athletes are a little bit drunk, an elderly couple have eaten there more than a few times. Except for Anya's character they're all foodies and as the film listens to their conversations and the chef's speeches it grows into a nicely twisted parody, with a few side dishes of jabs at privilege and class. That's common in the work of the director, Mark Mylod who helmed many episodes of Succession.

Anya's character is the only one not swayed by the foodie bliss and the first to see that the evening was turning into a terror. It happens slowly but perfectly because Fiennes is such a good host. He almost makes it make sense. (In theaters) 3 out of 5

GUILLERMO del TORO'S PINOCCHIO: That's the title. The director's name helps distinguish this version of the classic children's story from the many that came previously. Certainly Disney's animated masterpiece and the dull rendition starring Tom Hanks that came recently. No, del Toro's view is darker and in several way different. He sets the story in the time of Mussolini. Fascists are the main malevalent forces luring the young puppet. Geppetto carved him out of grief for his own son who died in a bomb attack in during World War I. I don't remember anything like that in the story before.

This isn't a kids' film, not young kids anyway. It's eerie at times, intense, messy and grotesque characters are very much so. Pinocchio is rude at times. At one point he looks up at a crucifix and asks why people "like him and not me." The puppet looks creepy at times and the characters he meets are evil. That includes Count Volpe the circus boss voiced by Christoph Waltz and the Fascist leader voiced by Ron Perlman. On the nice side there is Tilda Swinton as a wood sprite and Ewan McGregor as Sebastian J. Cricket his friend and narrator. It's the same journey between right and wrong but shown this time in artful stop motion animation. (Theaters now; on Netflix soon) 4 out of 5

DISENCHANTED: It's been 15 years since Enchanted proved so popular for its re-working of fairy tale matters. So here we are again with much of the same cast, more songs and dancing, live-action with bits of animation, and enough dazzle to make you forget any short comings. Namely a cutesy opening and some hokey developments after that. But much of it works very well. If you've got a niece or daughter this would be a good watch over the holidays. It's best for older kids, those who know fairy tales well-enough to appreciate the many ways this films turns their conventions sideways.

Amy Adams as Giselle questions whether "happily ever after" is possible. What happens after? She and Robert (played by Patrick Dempsey) now have a teenage daughter (Gabriella Baldacchino) and a new baby, are tired of New York where they ended up last time and move to a suburb. There she encounters a self-professed "queen" of the town (Maya Rudolph) and eventually has to battle to usurp her. That confrontation happens after she makes a wish that this place becomes like the fairy-tale town she came from. But along with that she also has to bear a personal change. She turns into a classic "stepmother." She fights with her daughter. But then also "the queen." The film builds into a huge light and special effects show. And a feel-good thriller. (Disney+) 3 ½ out of 5

STAY THE NIGHT: Here's a nice change. A love story that works beautifully, plays easily and sensitively, just like it might in real life. You've probably had experiences like it and can relate very well. For about 90 minutes we watch two different people meet, tentatively share some of their story, get to know each other more fully and help each other out. Some movies would jump them into bed almost right away and make a big thing of that. This one is much more about making a connection through talking. It's warm-hearted and enjoyable and Canadian too. You see real Toronto neighborhoods in it.

Grace (played by Andrea Bang who some will recognize from Kim Convenience's) is far-too reserved (according to her sex-happy friend) and misses out on a promotion at her office. Carter (played by Joe Scarpellino, an actor who I've not seen before) is a pro-hockey player who is being sent down to the minors for underachievement. Naturally these two will meet, share their thoughts about the world and help each other out with advice and empathy. She's still a virgin, for instance, and not eager to change that. He's hurt by his professional slide. Their talk reveals all the background we need about their lives and we get to feel we know them. Scarpellino is especially impressive, but both actors are fine and director Renuka Jeyapalan (she has many TV credits) keeps us engaged with them and the film moving along. (In theaters in Toronto, Ottawa and Vancouver) 3 ½ out of 5

SALVATORE: SHOEMAKER OF DREAMS: Who would have thought that a documentary about a man who designed shoes would be so interesting. But Salvatore Ferragamo's life had an engaging story. He was fascinated by the craft of shoemaking as a young boy in Italy and by age 12 wanted to open his own shop. As a young man he went to America and got a job designing shoes in Hollywood. Big stars like Clara Bow and Greta Garbo wore them. His fame rose and he returned to Italy to open that shop he had dreamt of and also went back and forth between the two countries. His name lives on with stores in Toronto, Vancouver and elsewhere. And with the famous brand.

The film shows his drive. "Determination" he called it. "Courage," his sister calls it. We hear his own voice in a few clips and from actor Michael Stuhlbarg reading from what seems to be his diary. Relatives, writers and shoe world names like Manolo Blahnik and Christian Louboutin talk about his design artistry. He was appalled by machine-made shoes, for instance, and only accepted hand-made ones. Martin Scorsese appears to give some enthusiastic tales of the Hollywood segment of his career. He's not really needed but energetic anyway. There's mention of Mussolini but how he affected Ferragamo is not made clear. A rare fault in a lively film. (In theaters) 3 out of 5