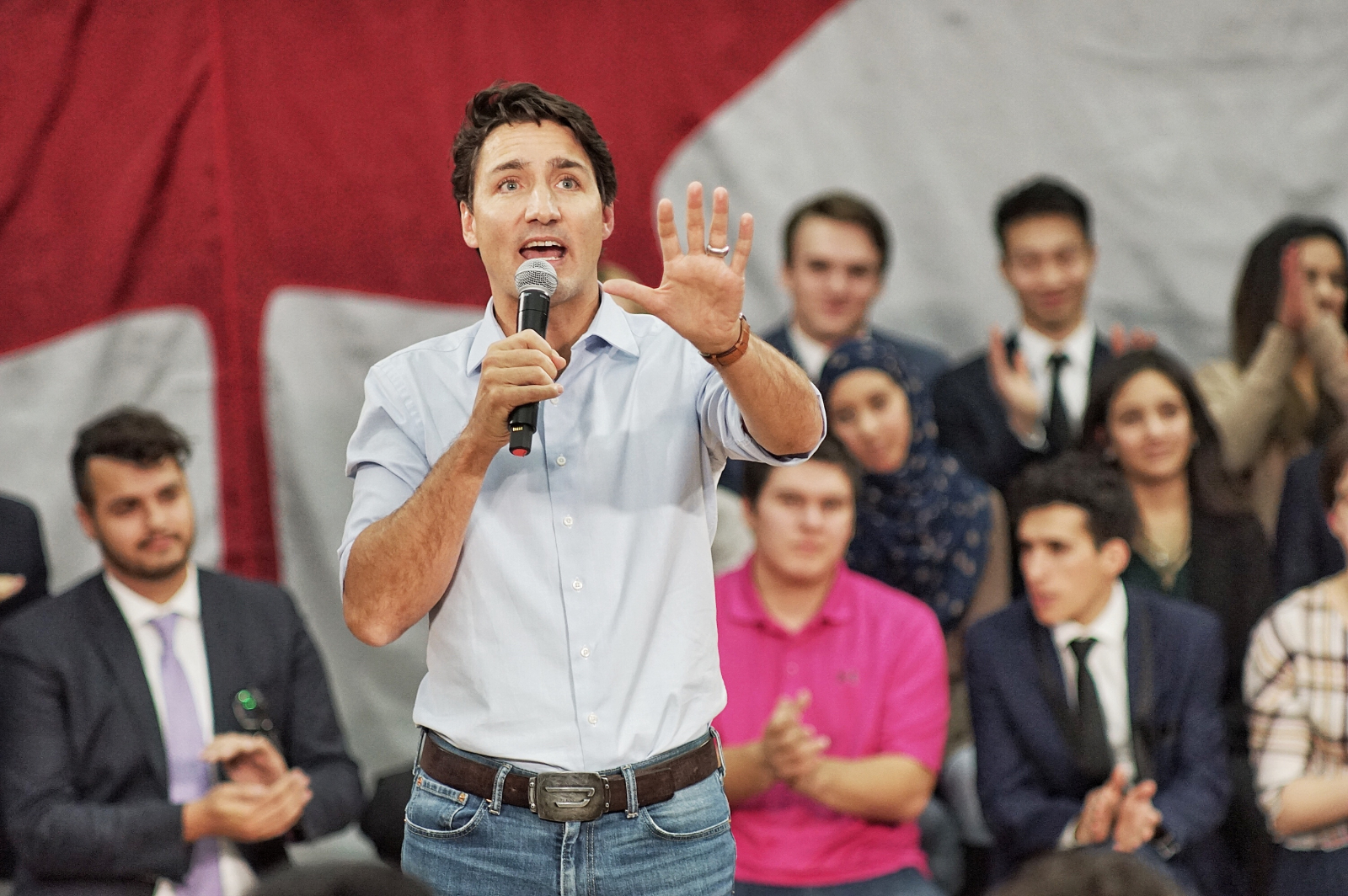 The final question at a town hall meeting hosted by Prime Minister Justin Trudeau in Calgary came from a man wearing a ‘Make America Great Again’ cap and an ‘I Love the Oilsands’ t-shirt. It triggered a dramatic response from Trudeau who delivered a stump-style speech on climate change.

Trudeau navigated through both cheers and jeers as he fielded a range of questions from the boisterous and rowdy crowd of about 2,000 people at the Tuesday evening event. It was the end of a trip to the oil-rich province that had largely been spent behind closed doors for two days of meetings with his cabinet.

The local man asking the question is a well-known activist. He waved his red hat for much of the hour-long event at the University of Calgary.

“When will you take a question on the oilsands?” yelled another unidentified man who heckled the prime minister throughout the meeting.

Trudeau and his cabinet's visit to the southern Alberta city came as climate-doubting U.S. President Donald Trump is in the midst of his first full week in the White House. Trump was elected in November following a campaign in which the former businessman and showman pledged to encourage more fossil fuel development by introducing new incentives and eliminating some laws to prevent pollution.

Some recent public opinion surveys show that Trump's message has resonated more with Albertans than with other parts of Canada.

Like much of the province, Calgary has been hammered by slumping global commodity prices that have led to bankruptcies and tens of thousands of layoffs.

After letting a young woman finish her question, Trudeau said that he would take a final question on the oilsands from someone who asked it in a respectful way.

That was when the man with the red hat — Merle Terlesky, a conservative activist in Calgary — stood up.

“You’ve been saying two different messages,” he said. “Down east, you’ve been telling people that you want to kill the single biggest employer in our province.

“Yet when you come to Calgary, you tell people you’re sorry. Well I’m sorry, but I’m a little confused.”

Trudeau’s predecessor, former Conservative prime minister Stephen Harper, had also pledged to phase out fossil fuels as part of a 2015 commitment made by the world’s seven largest economies.

But Terlesky said Trudeau can’t come to Alberta and attack its most important resource.

“Will you take back that remark? Will you retract it utterly and completely and tell Albertans that you are not here to attack the Alberta oilsands, that you will support it and that you will do nothing to stop the Keystone pipeline?”

Cheers came from the crowd.

Live feed dropped before the last question tonight in Calgary, about oilsands development. Here it is in full: pic.twitter.com/Sxf4ZuIaF4

Trudeau said he has been consistent in his message on the oilsands, but stopped answering when he got booed.

“If you are going to ask me a question, you might want to hear the answer,” he continued. “I have repeatedly said that, ‘Yes, the responsibility of any Canadian prime minister is to get our resources to market and yes, that includes our oilsands, fossil fuels.’

'Even Stephen Harper realized we have to get off fossil fuels eventually,' Trudeau says

The oilsands are part of the world's third largest crude reserves after Saudi Arabia and Venezuela. But the unique nature of the Alberta reserves — deposits of a heavy tar-like oil, mixed with sand and buried deep under Canada's boreal forest — makes oilsands production expensive and sometimes unprofitable. It also makes the industry the country's fastest growing source of greenhouse gas emissions.

Trudeau suggested the previous government didn’t get pipelines approved because they refused to protect the environment.

“I have talked repeatedly about the fact that we need to get off fossil fuels as a dependency we have,” he said, again gaining more support from the mostly student audience. “Even Stephen Harper realized we have to get off of fossil fuels eventually. We have to do that, but we cannot do that right now. We need to manage the transition and that’s why I have approved pipelines that the previous government wasn’t able to do.”

Trudeau said he’s approving the pipelines because it's part of a larger plan that addresses environmental impacts and focuses on a more sustainable development of the oilsands.

“We can build a strong economy with good jobs and protect the environment at the same time,” he said, asking the people in the crowd whether they thought climate change is real.

Most of the people raised their hands.

“There you go,” said Trudeau, as they cheered and drowned out his impassioned speech on climate change. “The world is changing, that’s what we have to adjust to…”

When it was over, some of those in attendance said it was interesting to see the perspectives of those people who asked questions ranging from women’s rights and Aboriginal issues to job losses in Alberta and international trade.

“Some people are emotionally affected — like the guy with the oilsands question,” said Ryan Lock, a student at the U of C. “I felt a lot of anger from him. I do understand economic conditions and the hardship people are feeling, but I feel like Trudeau is going on the right path.”

Another student said he was concerned that a legitimate question got lost in the noise and accusations being levelled by Terlesky and the people who heckled throughout the town hall.

“He actually missed the important question,” said Eric Law, noting he wanted to hear whether Trudeau would support the Keystone XL pipeline that was put back in motion by U.S. President Donald Trump early Tuesday.

During a media conference earlier in the afternoon, Trudeau discussed both the Keystone pipeline — a major pipeline project proposed by Calgary-based TransCanada Corp. that would link Alberta's oilsands to refineries in Texas — and his earlier comments about phasing out the oilsands at one of the town hall meetings in Ontario last month.

“I misspoke,” he told reporters Tuesday. “I said something in a way I should (not) have said it.”

Trudeau angered many Albertans with the comment — including Alberta’s opposition Wildrose party leader Brian Jean who said in a Facebook post this week that “we are proud of our oilsands and the entire oil and gas industry. We will not apologize for it.

“The Trudeau government needs to wake up and understand how devastating this would be to Calgarians and the entire provincial economy.”

The prime minister, whose Liberal party has only four out of Alberta's 34 seats in Canada's Parliament, said he knows how important the province is as a driver of the Canadian economy, but noted oil and gas development must be done in a responsible and sustainable way.

“I’m proud of the fact that we have been able to do a few things the previous government has been unable to do — including approving two significant pipelines and possibly have Keystone XL move forward in the coming years,” said Trudeau.

“The previous government spent a lot of time talking big about defending Alberta, talking about what it was doing for Albertans, took for granted an awful lot of Albertans,” he added, “but what we’ve been focused on is not the words but the actions necessary.”

Thanks to Trudeau for getting

Thanks to Trudeau for getting through this meeting and making clear he is paying attention and has plans to phase out fossil fuels. We need more conversation about how and where this might be done. The angry man in the red hat reveals the fear and frustration that happens when civil society is discarded.

Too bad Trudeau's take on the

Too bad Trudeau's take on the oil sands isn't realistic; many people would like to have both bitumen exports "for centuries' (isn't that what he said earlier this month?) and real action on climate change. It just isn't possible to have our cake and eat it too, in this case.

Completing the Keystone, expanding the Kindermorgan commits us to 40 years of increased production in the tar sands. Its been known for over a century that efficiencies don't change the CO2 climb, because what we save in one area, we erase with increased production. Its called the Jevon's paradox, I believe, though I may have the spelling incorrect. It's why 'the low hanging fruit' of energy efficiency is a canard. We might feel good about doing it better, but it doesn't cut emissions in any significant way.

One last point i discovered recently. Forty years of shipping the number of barrels a day they are salivating over now, means fracking every little cavity in the deep earth that might hold some natural gas or sweet light crude. Because those bitumen pipes clog up without gaseous hydrocarbons, and the sad truth is this.

Most of the easy to get sweet light crude and natural gas in Alberta is gone. Dug up, burned, piped south.

I too wonder if Justin is a liar or confused. I suspect its a bit of both. He and Rachel are in a tight spot. Albertans are hurting, and we have been profligate with our good fortune, not national benefactors as we like to paint it.
The temptation is to let the planet take one more for the 'team'.

But I'm not on that team. And nor are my grandchildren, or all my beloved relations. I can live with much less, so long as I can breathe the air and drink the water. Business as usual in this country makes those minimal requirements problematical.

The UN issued a report last

The UN issued a report last year saying that even if every country kept to the (non-binding and unenforceable) Paris Agreement, that would only be 50% of the cuts needed to keep below 2 degrees of warming. The melting is accelerating beyond science's worst predictions and we have already experienced what they expected wouldn't happen for at least 30 years. There is absolutely zero room for increasing the output from hydrocarbons. Full stop. It is time to unplug most of the gadgets, share vehicles, get bicycle programs and walking a lot more. Stop subsidizing O&G and invest in solar on buildings (as opposed to destroying more land for them) and small- scale locally owned biomass, geothermal, etc. But not bird killing mega turbines or fish killing dams. There is no preserving the environment if any of these projects are built and the absolute spineless, wobbly-legged decisions being made are a threat to all life in this planet. The issue with most of those complaining in AB is that they refuse to work for regular pay and demand the six-figure pay they once had. Those same employers are now paying much less, which angers those still working. The AB government is angry because they inherited a broke, addicted, province that blew every dime of revenue for decades and has very little to show for it. Continuing to enable these addictions only makes it worse for everyone. The time to transition is NOW.

"Like much of the province, Calgary has been hammered by slumping global commodity prices that have led to bankruptcies and tens of thousands of layoffs."

Yes, absolutely Calgary has been hammered. Ur...uh... well, the working people of Calgary and Alberta have been hammered. There is another Calgary that has not been hammered: the oil % gas CEOs, company board members, and principle shareholders (e.g., Koch brothers). Nope, they're doing just fine, even though--geniuses that they are--they over-built, over-drilled, and over-mined, over-fracked oil and gas and, thereby, crashed the price of oil.

Same thing happened when Wall Street brought on an economic disaster and almost completely crashed the world economy. Main street suffered. Man street bailed them out. But they still got their multiple million bonuses.

Understand this: our political economic system serves the corporations and super rich.