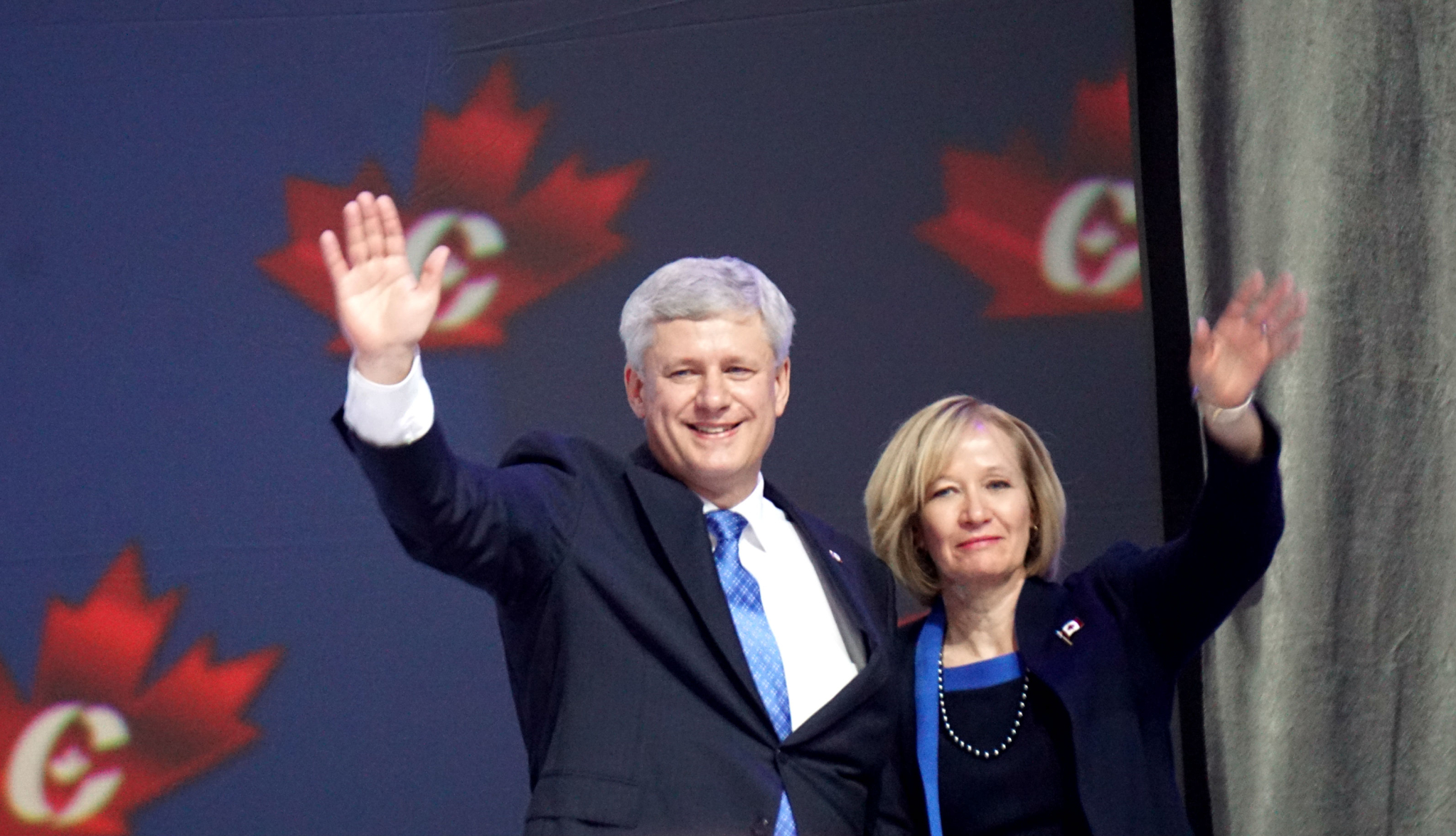 Former prime minister Stephen Harper and his wife, Laureen Harper, wave to Conservative supporters at party convention in Vancouver on May 26, 2016. File photo by Elizabeth McSheffrey.
Previous story
Next story

In a stinging repudiation of former prime minister Stephen Harper's treatment of Canada's First Nations, the Federal Court of Appeal has asked the government to reconsider a 2014 decision to approve a major pipeline project to the west coast of British Columbia.

In a two to one decision made public on Thursday, the court agreed with the arguments of several First Nations, including the Gitxaala and the Haisla Nations, as well as environmental groups who triggered a legal war to block the Harper government's approval of Enbridge Inc.'s Northern Gateway pipeline.

The controversial multibillion dollar project was approved by Harper's government in June 2014, following a lengthy review, with more than 209 conditions. But Alberta-based Enbridge has not yet been able to get the project started and the court decision blamed Harper's government for messing up the environmental assessment.

The court decision, which could be appealed, makes it unlikely that the project can proceed without meaningful consultation with affected first nations, but not impossible.

If built, the project would ship bitumen from Alberta's oilsands region to Kitimat on the west coast of British Columbia, enabling new exports of Canadian oil to Asia. The project would also include a separate pipeline for a toxic mixture used in the oil pipeline to help the heavy tar-like bitumen flow.

While Enbridge and supporters from the business community have backed the project describing it as a job-creating path to prosperity, many First Nations have joined forces with politicians and environmentalists in opposition to the project because of the risks of an oil spill and the climate-warming greenhouse gases associated with the project and expansion of the oilsands industry. Enbridge has 31 First Nations and Métis partners in its bid to build Northern Gateway.

In their ruling, the judges from the appeal court said Harper's government rushed the consultation process, with orders from the "highest level of government" directing that information of federal knowledge about the harmful impacts of the project "not be shared with any First Nation."

"The inadequacies—more than just a handful and more than mere imperfections—left entire subjects of central interest to the affected First Nations, sometimes subjects affecting their subsistence and well-being, entirely ignored," said the June 23 court decision that was publicly released on Thursday. "Many impacts of the project... were left undisclosed, undiscussed and unconsidered. It would have taken Canada little time and little organizational effort to engage in meaningful dialogue on these and other subjects of prime importance to Aboriginal peoples. But this did not happen."

The court also found that the government could have resolved the issue, simply by extending consultations by about four months.

"But in the face of the requests of affected First Nations for more time, there was silence," said the ruling. "As best as we can tell from the record, these requests were never conveyed to the Governor in Council, let alone considered."

Canada's energy regulator, the National Energy Board - which ultimately was the organization that recommended that the project be approved, noted in a statement to National Observer that the ruling had praised the assessment process for being set up well and that this was no small achievement. But the regulator also said it was too early to say if it would appeal the decision, adding that Prime Minister Justin Trudeau's cabinet would also need to weigh in about the future of the project.

The Liberals had campaigned against Northern Gateway, during the last election and were critical of Harper's treatment of Indigenous communities. Shortly after the ruling was made public, Natural Resources Minister Jim Carr said through a spokesman on Thursday that the government would review the ruling before deciding what to do next.

"The government of Canada is committed to a renewed, nation-to-nation relationship with Indigenous peoples, based on recognition of rights, respect, cooperation and partnership, including our duty to consult," said Carr's spokesman Alexandre Deslongchamps.

"We are working to restore public confidence in the credibility of environmental assessments ensuring decisions are based on science, facts and evidence, including the traditional knowledge of Indigenous Peoples."

The ruling was also critical of the former Harper government for failing "to engage, dialogue and grapple with the concerns expressed to it in good faith" by all of the affected First Nations.

"Missing was any indication of an intention to amend or supplement the conditions imposed by the (review panel), to correct any errors or omissions in its Report, or to provide meaningful feedback in response to the material concerns raised," said the ruling. "Missing was a real and sustained effort to pursue meaningful two-way dialogue. Missing was someone from Canada’s side empowered to do more than take notes, someone able to respond meaningfully at some point."

The ruling also singled out former Conservative environment minister Peter Kent for committing in an April 2012 letter to meaningful dialogue. The government would then avoid "defining exactly what was in play during the consultations," the court said.

The court noted that, Jim Clarke, a senior government official in charge of overseeing major project reviews had confirmed in testimony that consultation on several issues "fell well short of the mark."

In a statement, Enbridge said that the ruling "addressed important concerns" but it remained committed to building the new pipeline.

"Though the court found that the (review panel's) recommendation was acceptable and defensible on the facts and the law and is reasonable, they concluded that further consultation is required," Enbridge spokesman Graham White told National Observer in the statement. "While the matter is remitted to the federal government for their redetermination, Northern Gateway will consult with the Aboriginal Equity Partners and our commercial project proponents to determine our next steps.

"However, the Aboriginal Equity Partners and our commercial project proponents are fully committed to building this critical Canadian infrastructure project while at the same time protecting the environment and the traditional way of life of First Nations and Métis peoples and communities along the project route."

First Nations who make up the Yinka Dene Alliance were in a celebratory mood after reading the ruling.

"Yinka Dene Alliance First Nations refused Northern Gateway permission to enter our territories as a matter of our own laws, and now the Court has made it crystal clear that the government must listen to us and take our laws seriously," said Chief Larry Nooski of Nadleh Whut'en First Nation in a statement.

Stand, one of the environmental groups involved in the case under its previous name - ForestEthics Advocacy Association - was also celebrating the news, saying that it indicates the pipeline won't be built.

Editor's note: This article was updated at 6 p.m. ET on Thursday to include reaction from the federal government and the National Energy Board.

This is an important decision

This is an important decision that throws light on the unrecorded deficit racked up by the Harper government while trying to show the finances were balanced.

By cutting corners and by trying to exclude real consultation indigenous peoples, Harper and his government incurred an operational deficit that has delayed or made impossible a pipeline project they had deemed important. This deficit has been passed on to the successor government that will have to pay cash and possibly scrap the project altogether. So, the actions of Harper brought them closer to a balanced cash position but shifted spending onto his successors.

Another area of this evaluation that appeared to receive minimal attention is the sea route for shipping out of BC.

As time passes, investigative journalists to the extent that they are able will uncover many operational deficits that have to be compensated for through the payment of money. Those expenditures should properly be attributed to the Harper government.

If the analysis is complete, it will show that the Harper government actually left its successor with a multibillion-dollar deficit.

Citizens must be aware of this and not be fooled by the rhetoric of Harper Cons still claiming to be responsible fiscal managers. In truth, they are the opposite. Unfortunately, the mass media are like sheeple when dealing with the Cons.