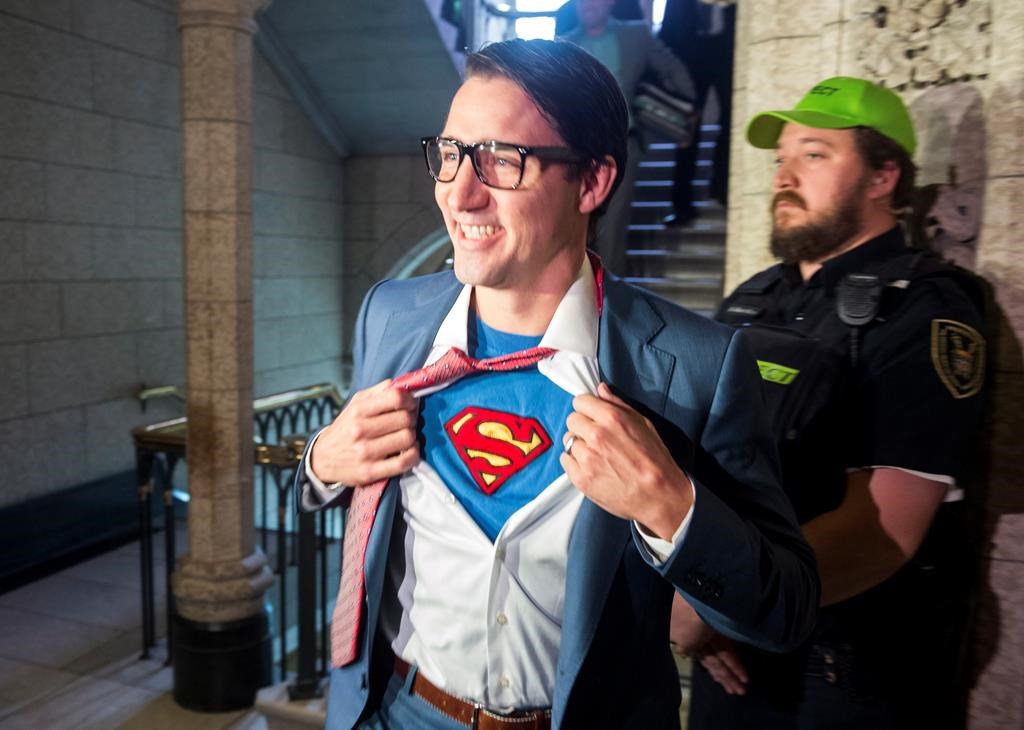 Prime Minister Justin Trudeau shows off his Clark Kent costume outside the House of Commons on Oct. 31, 2017. Photo by The Canadian Press
Previous story
Next story

The prime minister is disguised as Clark Kent as his Halloween alter ego for 2017.

On his way to question period today, Trudeau descended the stairs sporting slicked-down hair and a blue suit with a bright red tie, surprising the assembled staff and journalists who were waiting for him.

As he got to the bottom of the stairs, he opened his shirt to expose the Superman costume hidden underneath, quipping, "It had to be done."

Trudeau wasn't the only one to put on a superhero costume. Environment and Climate Change Minister Catherine McKenna also jumped into action, dressed as a masked "Climate Crusader".

We all need to be superheros in the fight against climate change. #HappyHalloween Canada! 🍁🇨🇦#ClimateCrusader pic.twitter.com/dwSoYSGYX2

Trudeau has a history of having fun with Halloween, choosing Han Solo of "Star Wars" fame for his first year in office.

Last year he went as a pilot from the French children's book "Le Petit Prince," while his youngest son, Hadrien, went as the title character.

Not to be outdone, Conservative Leader Andrew Scheer also got into the act, dressing up as Star Trek's Captain Kirk as he handed out candy to children trick-or-treating at Stornaway, his official residence in Ottawa.

"Resistance to candy is futile," Scheer wrote on Twitter, making light of the slogan of one of Star Trek's villains, the Borg.

From my family to yours, Happy Halloween! Hope you had a safe, fun, and spooky night. 🎃 pic.twitter.com/SagHi6v94Q

"My kids are just out on an away mission and I hope they come back with lots of treats and candies," Scheer said in a short video posted on Twitter. "I hope all the kids get nice and sugared up."

I find it curious to have our

I find it curious to have our Prime Minister show up as two people, Clark Kent and SUPERMAN. Now is SUPERMAN the Climate Hero and Clark Kent the quiet unassuming guy that nobody notices, or what? But that doesn’t quite fit Trudeau’s public persona, does it? So what could he be communicating to the public? Perhaps just that he believes he can be both to all of us, a Climate Hero to Paris (and many of us who voted for him in 2015) and a Fossil Fuel Hero to the Industry (which has to hidden from the public). Curious indeed!