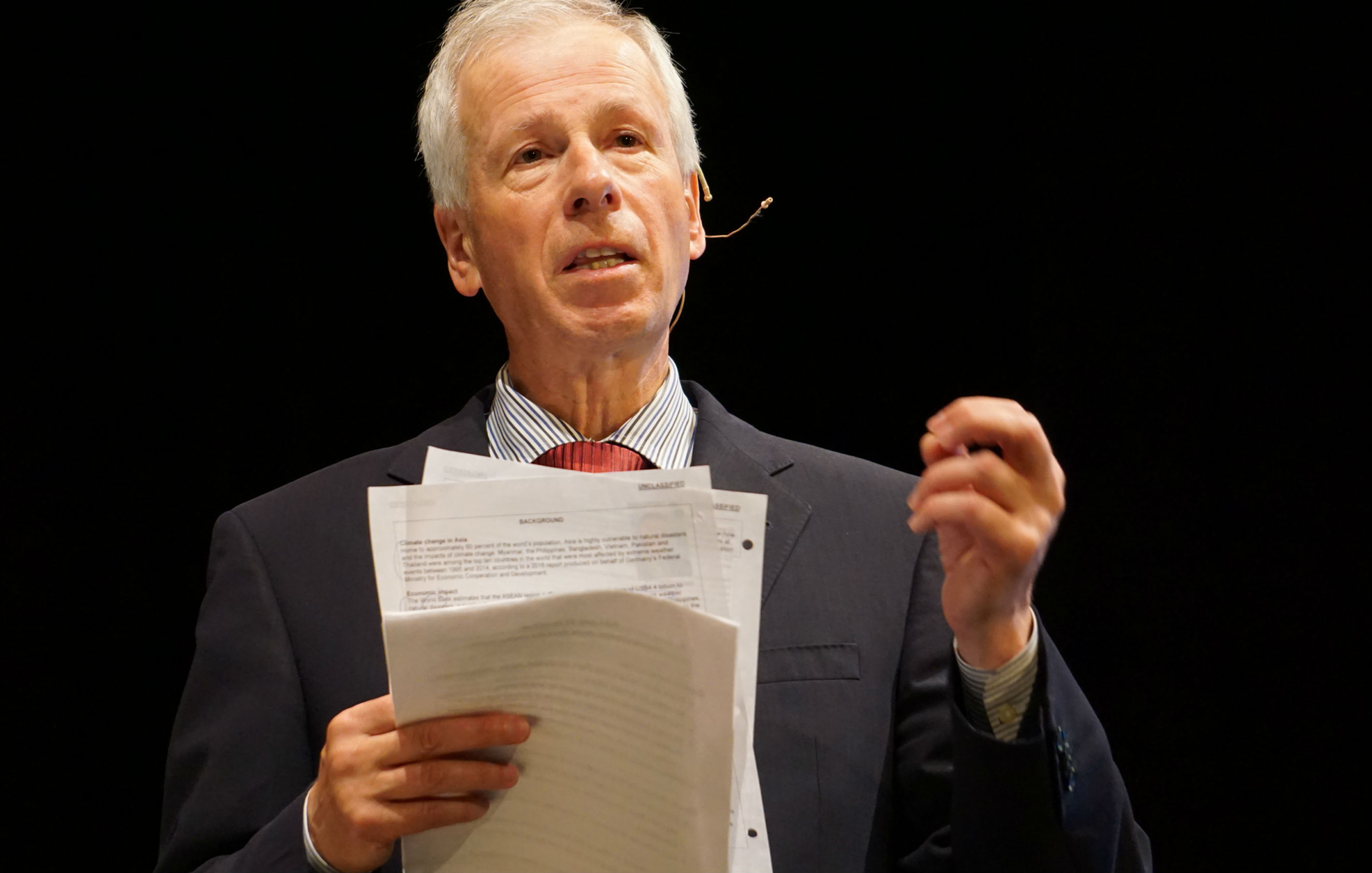 A federal court’s decision against a judicial review of Canada’s weaponized vehicle exports to Saudi Arabia may be appealed, in part, due to new information about the $15-billion deal uncovered by National Observer.

Documents obtained under access to information legislation indicate that Stéphane Dion, the foreign affairs minister who signed the controversial export permits last year, was never fully informed by his team of human rights experts about the severity of human rights abuses in Saudi Arabia.

That information — contained in a series of heavily-censored reports — contradicts federal Justice Danièle Tremblay-Lamer’s ruling last Tuesday that at the time, Global Affairs Canada was “unanimous in recommending to the minister that the export permits be issued,” said University of Montreal law professor Daniel Turp.

Turp co-ordinated the case against former foreign affairs minister Dion in December, which sought to have a panel of judges closely examine the legality of the export permits and possibly repeal them.

Government watchdogs were disappointed with Tremblay-Lamer’s ruling last Tuesday, and have said Canada should not be arming Saudi Arabia — an international and domestic pariah on human rights —with 1,000, heavily-armed, 30-tonne ‘Light Armoured Vehicles’ (LAVs).

Turp’s initial case centred on Dion’s April 2016 approval of permits to export 1,000 or more Light Armoured Vehicles to the ultra-repressive Middle Eastern country, currently waging war in nearby Yemen. The military vehicles are made by an Ontario-based subsidiary of U.S. weapons giant General Dynamics, a global aerospace and defence company headquartered in Virginia.

General Dynamics’s Canadian unit has shipped more than 3,000 of these military machines – which are often equipped with multiple highly lethal gun systems — to Saudi Arabia since the 1990s. The permits issued by Dion will add at least another 1,000 over the next decade.

If the appeal to Tremblay-Lamer’s decision on the review of the deal goes ahead, said Turp, it will rely in part on a year-long investigation by National Observer that indicates Dion was never fully-briefed on the state of human rights in Saudi Arabia.

That undercuts not only the morality, but also the legality of Dion’s decision to approve the export permits for the 30-tonne military machines, said Turp.

Minister should have been fully briefed

Under the federal Export and Import Permit Act, the foreign affairs minister must “closely control” arms exports to countries with serious human rights problems, in order to ensure there is “no reasonable risk” Canadian-made weapons are ever used against civilians. To achieve this control, ministers must be fully briefed by federal human rights experts.

In this case, the relevant experts are not listed among those who independently briefed Dion, as evidenced by extensively-detailed descriptions of Dion’s briefings obtained by National Observer. The experts in question are a team known as the Human Rights and Indigenous Affairs Policy Division, nested within Global Affairs Canada.

According to the documents, within that particular ministry, Dion was only briefed by the Middle East and Mahgreb Bureau, the Defence and Security Relations Bureau, and the Aerospace and Automotive Defence and ICT Practices Bureau.

In 2015, the Human Rights and Indigenous Affairs Policy Division produced an extensive internal investigative report on Saudi human rights violations (pictured above), but the government refused to release this report in anything but a highly-censored version to National Observer. National Observer has asked the Office of the Information Commissioner of Canada to investigate whether this censorship is legal.

Were the permits legal?

In her ruling last week, Justice Tremblay-Lamer said the role of the court is not to “pass moral judgments” on Dion’s decision to issue the export permits, but rather to determine “the legality of such a decision.”

According to Turp, the federal judge made two essential mistakes.

She wrongly ruled that the permits are legal despite the fact Dion wasn’t briefed by the authors of the government’s report on Saudi human rights, he said. She also erred because there is strong evidence that Canadian-made armoured troop carriers have already been implicated in human rights violations by Saudi troops and police in Yemen, he added.

The law professor referenced statements from Saudi human rights activist Ali Adubisi, first published in the Globe and Mail’s Report on Business Magazine in late April, 2016. That investigation, tabled as evidence in the case against Dion, revealed that General Dynamics – aided by extensive legal and diplomatic help from the federally-owned Canadian Commercial Corporation – is using Canada as a country of convenience in order to sell its fighting machines without scrutiny from the U.S. Congress.

No interviews granted in media requests

But thanks to the Canadian Commercial Corporation (CCC), which structured the $15-billion deal with Saudi Arabia as a “government to government” deal, General Dynamics is labelled a mere subcontractor and did not report its massive contract to the U.S. Congress.

“As a federal government export support mechanism, each contract signed by CCC with a foreign government buyer carries a guarantee – backed by the Government of Canada — that the contract’s terms and conditions will be met,” CCC told National Observer in a written statement.

When National Observer asked the federally-owned corporation for proof that Canadian armoured vehicles are not being used in a manner that interferes with citizen human rights in Saudi Arabia, Yemen and Bahrain, the company referred the question to Global Affairs Canada. It also redirected questions about why the exports from General Dyamics’ Canadian unit are no longer reported to the U.S. Congress.

“The Federal Court has recognized that the Minister of Foreign Affairs acted lawfully in making this decision to issue these export permits,” Global Affairs spokesperson John Babcock said in an email. “The Government of Canada is committed to advancing human rights everywhere, including in Saudi Arabia.”

In an interview, Saudi activist Ali Adubisi, who heads the Berlin-based European Saudi Organization for Human Rights, told National Observer that LAVs have been previously seen firing cannons at residential targets in Qatif, a Saudi city of 500,000 in April 2015. There is no proof that these LAVs are Canadian.

But Adubisi, who fled Saudi Arabia in 2015 after being arrested for political activism and held without trial for 11 months, said such armoured vehicles are widely-used by Saudi authorities to contain domestic dissent.

“The vehicles are used everyday to surround Qatif, which is the biggest protest city in Saudi Arabia," he said. “The police are afraid to use normal cars.”

Canadian-made armoured vehicles were used to suppress dissent in Bahrain in 2011, he alleged, and may now be in use in Yemen, where the Saudi armed forces are waging a war now estimated by the UN to have killed 10,000 civilians.

“There is strong evidence this deal should not have been approved,” Adubisi said of Ottawa’s sale to Saudi Arabia. “The evidence is clear. There are real victims.”

“We believe there is ample evidence in which Canadian armoured vehicles sold to Saudi Arabia are implicated in human rights violations,” Turp insisted, describing the copious evidence he tabled in court. “But the judge didn’t seem to want to see it.”

Turp said on the first day of the trial, he did not mention any of the documents obtained by National Observer to the judge, and brought them up quickly during verbal comments on the second day. It was mentioned in passing, he explained, the government was not obliged to address it and it was not considered thoroughly by the judge.

Tremblay-Lamer therefore noted Canada’s federal Export and Import Permits Act gave Dion “broad discretionary power” to issue export permits for the armoured vehicles, and suggested her power to review Dion’s decision “is limited to making sure that the … decision was exercised in good faith.”

“The court is satisfied that it was so exercised,” she added.

Dion, who is a noted expert in administrative law, was replaced as foreign affairs minister and resigned from politics shortly after the case against his decision to issue export permits was argued in court. He did not respond to an interview request from National Observer, and on Tuesday, was named Canada's new ambassador to the European Union and Germany.

Editor's Note: This story was updated at 4 p.m. E.T. on Tues. Jan. 31, 2017 to include Dion's latest appointment as ambassador and correct an error in date.

I sincerely hope that this is

I sincerely hope that this is appealed.

I would add, from experience and observation of living in Saudi Arabia from '89 to '96 and during the first Gulf War, the importance of considering the direction the new Saudi government [especially 31-yo Deputy Crown Prince Mohammed bin Salman] is taking the country and the internal resistance that will inherently come with it. The control and influence of the powerful 'old guard' will be challenged and inevitably result in push-back and internal conflict.

An informed decision by the Canadian government on this arms deal with respect to Human Rights and the risk to civilians, in my opinion, can only come through a thorough understanding of Saudi Arabia's past and weighing-in the context of their projected future.

This is typical of our

This is typical of our military and our government to follow along the coat-tails of the Americans. Anybody that thinks this equipment we are exporting to SA can not be used for military purposes is simply not with it. It also follows that our government is controlled by our corporations, and it apparently doesn't seem to matter whether it is the Conservative or the Liberals.

I knew what the Saudis would

I knew what the Saudis would do with the army equipment we provided - how come Trudeau and Dion didn't know - are they new?
I asked Trudeau a question at a Huff Post town hall, about why Canada was involved in these sales. I got a bullshit answer - previous commitments etc....... Wasn't able to ask a follow up question because my question was taped.