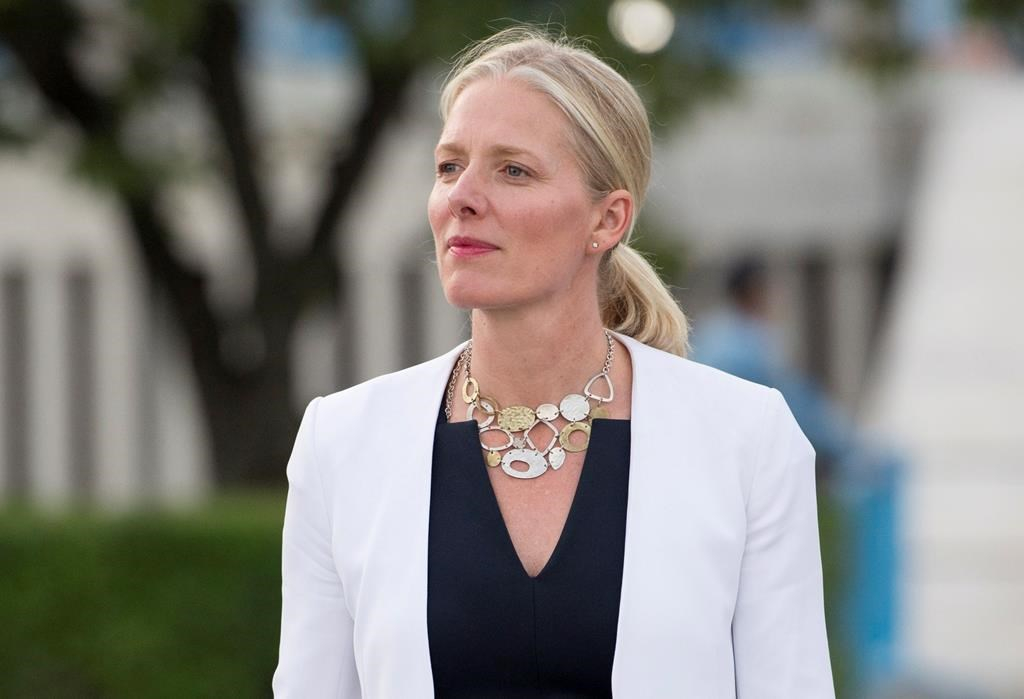 Environment Minister Catherine McKenna confronted a reporter for The Rebel on Friday, demanding he make a commitment that the far-right website stop calling her "climate Barbie."

The exchange occurred at a news conference after a meeting of provincial, territorial and federal environment ministers in Vancouver.

Christopher Wilson identified himself as a Rebel reporter and asked McKenna a question about the federal government's opinion on the role of hydroelectricity as a clean power source.

.@cathmckenna asks @ezralevant's Rebel Media reporter for a commitment not to use a demeaning hashtag when referring to her #pnpcbc #cdnpoli pic.twitter.com/3Vj8V5mLXK

Wilson replied that he personally has never called her that name.

However, the reporter has used it at least twice on Twitter and it appeared in an article published under his byline in January. He did not immediately respond to a request for comment.

McKenna pushed Wilson for a commitment that The Rebel will stop using that name in its articles and on social media.

"Me personally, yes, but I don't have editorial control of others," Wilson responded.

Wilson then accused McKenna of banning one of The Rebel's correspondents from going to an upcoming climate conference, which McKenna denied and said she wrote a letter encouraging the outlet to come so they could learn about climate change.

"Absolutely, and I have a legitimate question about hydroelectricity's role," Wilson said.

McKenna interjected that she was just asking for a commitment that the outlet won't call her names, talk about the colour of her hair or make fun of her.

"The reason I'm asking you not to do this is because I have two daughters. There are lots of girls that want to get into politics and it is completely unacceptable that you do this," she said.

Wilson replied by saying he finds it unacceptable that McKenna "smears" people who question climate change as "deniers" with "all the connotations of the Holocaust denial."

McKenna ultimately thanked Wilson for his commitment to stop using the term and addressed his question on hydroelectricity.

The Rebel did not immediately respond to a request for comment, but on Saturday morning the outlet posted several tweets using the "#ClimateBarbie" hashtag.

However, after his testy exchange with the minister Wilson wrote in a Twitter post, "Our Alberta bureau chief coined the phrase 'Climate Barbie,' a reference to McKenna's shallowness. She did not disprove that tonight."

In September, Conservative MP Gerry Ritz apologized for calling McKenna "climate Barbie" on Twitter, saying the term is "not reflective of the role the minister plays."

This took courage, and n

This took courage. In light of the #metoo movement it really is important for women to speak out like McKenna did here. Good for her for confronting the insulting #climatebarbie hashtag and not being afraid. Good for her for talking about the impact on her daughters and revealing her own vulnerabilities. I'm encouraged by this.

As usual, the media outlet

As usual, the media outlet begging for attention does it with lies, misogyny, and hate.

I applaud Minister McKenna for standing up to this sexism. I also applaud her for promoting clean energy.

Kudos to you Catherine for

Kudos to you Catherine for standing up to these ignorants and explaining your perspective on Canada's future. You have done a great job representing Canada. Thank you.

It was a beautiful moment and

It was a beautiful moment and should be shared widely. The time is over when name calling, whether gender based, or otherwise, can be tolerated in our political discussions. Respect for diversity? Certain right wing thinkers are faulting our Governor General for questioning the continuance of beliefs trumping science....and they are doing it ostensibly in defense of the respect due to Canadians of diverse opinion.

But poor McKenna, for her efforts to advance action on climate change, gets called a climate Barbie?? Not that Barbie dolls harm little girls....if there's a market for them, its A-1 okay....and completely natural. Isn't that the conservative line?
Barbies don't harm little girls, and besides, they are useful tools for insulting women who's work you disagree with. And let's not forget the full text. McKenna is shallow on climate change...say the rebels who don't likely believe in climate change.....but who are masters at coming up with dumb insults.
Time to do as McKenna has done, and call them out on their lack of respect.....for women in general.

And science in particular.

Sure Well done McKenna, but

Sure Well done McKenna, but sadly Rebel Media personal attacks and the fall out completely distract people from our ENVIRONMENT and negates the reality that not one of our #cdnpoli parties are doing nearly enough to protect our interests