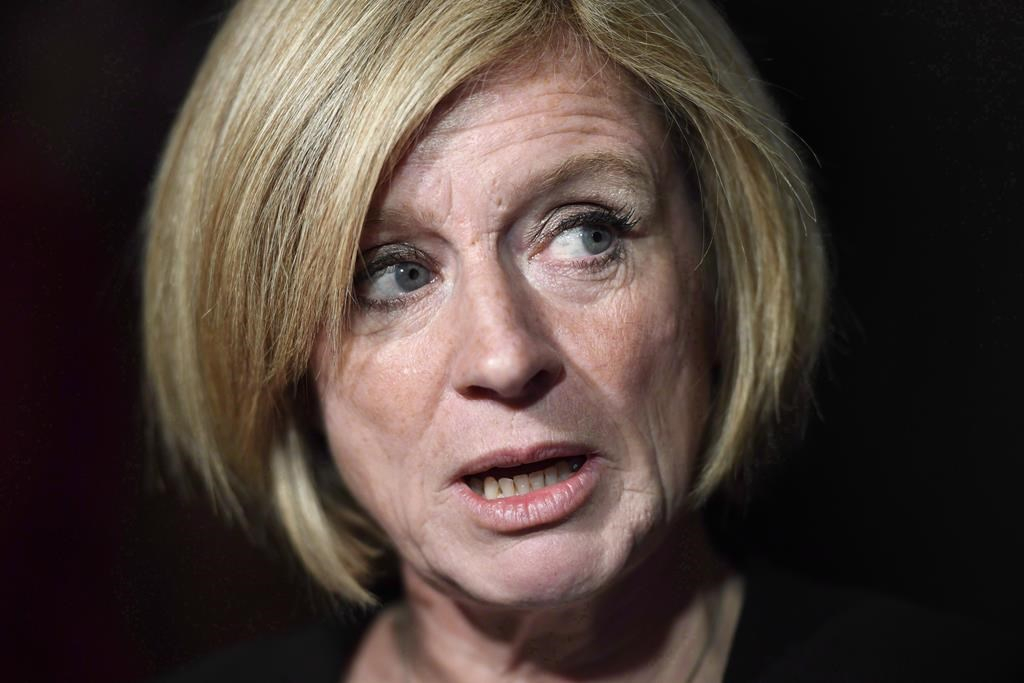 Rachel Notley speaks to reporters following a Council of the Federation meeting in Ottawa on Tuesday, Oct. 3, 2017. File photo by The Canadian Press/Justin Tang
Previous story

Alberta Premier Rachel Notley is to go on tour later this month to stump for the Trans Mountain pipeline, but is resisting opposition calls to wield a big stick against its opponents.

Notley is to speak in Toronto, Ottawa, Vancouver, Calgary and Edmonton over the next three weeks on the importance of the pipeline expansion to the British Columbia coast through Burnaby.

The $7.4-billion Kinder Morgan Canada (TSX:KML) project is to expand an existing pipeline so Alberta can get a better price overseas for its oil.

The line was approved last year by the federal government, but is opposed by B.C.'s governing NDP. Burnaby officials have been accused of delaying the project by dragging out permit approvals.

"Will you use this opportunity to send a message to (B.C. Premier) John Horgan, as well as the mayors of Vancouver and Burnaby, that would include potential consequences if they block Trans Mountain pipeline?" Nixon asked Notley in the legislature Monday.

Notley said Alberta will continue to fight for the project through the proper channels. She noted that such action is what got the project approved in the first place.

Alberta has joined Kinder Morgan in urging the National Energy Board to cut the red tape and get the permits approved.

"We will continue to do the work that we can do in the appropriate forums to advocate for Alberta's position (and) for Kinder Morgan's position," Notley told the legislature.

The pipeline expansion has met fierce opposition in B.C. on the grounds it is an environmental hazard, perpetuates a greenhouse-gas economy and doesn't respect the rights of Indigenous people.

Nixon pushed Notley on how she feels about federal NDP Leader Jagmeet Singh opposing the project.

"Has the premier spoken to her federal leader and informed him he is wrong on his position on pipelines?" Nixon asked.

"I've told Mr. Singh that he is wrong, he is dead wrong, but just as important, he is irrelevant — and the reason he is irrelevant is because the decision has already been taken by the federal government."

Pipelines have become the focus of question period in the current Alberta legislature sitting.

Notley has spoken out against including downstream emissions in the approval process and has accused the Opposition of putting party above province.

"I know the UCP over there is gleefully predicting that the pipeline will fail," Notley told the house.

"They are cackling, praying that it won't be built, but for Albertans this issue is bigger than partisan politics. I get that, and I think it's about time that they do, too."

Rachel you are wasting your

Rachel you are wasting your time coming to Vancouver on behalf of the American Company Kinder Morgan. Way better if you build a Gasoline Refinery within walking distance of the Alberta Legislature [imagine the photo opportunities] so we will continue to pay 'through the teeth' for gasoline BUT it will be Canadian Gasoline.

Do you not get that we do not want your TAR spilling into our SEA? They do not mix. 15,000 Pipeline Jobs? we already have 40,000 Tourism-Related Jobs which would be lost with the inevitable TAR spill. Mind you, the Skipper of the Exxon Valdez did create more Jobs in Alaska than the [at the time] Governor of Alaska. But not the kind of Jobs we want here in B.C.

As for Jason Nixon, what "threatening consequences' is he referring to? That Albertans will Boycott BC? Sweet!!! Maybe B.C. could apply the Foreign-Home Buyers Tax to include Albertans. Or a Cross-Provincial Border Toll. hahaha

The issue absolutely is

The issue absolutely is bigger than partisan politics. It is about our environment, our health and our children's future, all of which are under extreme threat form the expansion of oil sands development and fracking that will be the consequences of pipeline approval.

“The $7.4-billion Kinder Morgan Canada (TSX:KML) project is to expand an existing pipeline so Alberta can get a better price overseas for its oil.“ So why is the oil going through the existing pipeline not going to asia? The crude oil tankers loading at the Burnaby terminal are all going to the USA, most of them to California. If there was a higher price available in asia the tankers would be going there.

Not only should we factor in

Not only should we factor in upstream and downstream emissions....we should think about the 40 year life span of a pipeline intended to carry millions of barrels of dilbit a day. All the data I've read on man made climate change says we don't have 40 more years to keep producing this unconventional, high CO2 producing fossil fuel.

So as much as Alberta might think the Kindermorgan is in their economic interest, the evidence suggests it isn't in the planet's interest. A rapid transition off oil and gas would be.

I feel for Notley, am saddened that she has to do an Alison Redford II and go on the hustings for an American pipeline company. Redford spent thousands of Alberta taxpayers money advertising for TransCanada in the United States, to no avail. People who have to live with these pipelines don't want them....nor do they so much believe in this business of the 'national interest'.
Every day that goes by, more Canadians have sympathy for that position.

For clarification, the proposed expansion does require new pipe as stated on page 8 of the application: "...the proposed Expansion is contemplated to comprise pipeline facilities that complete a looping of the Pipeline in Alberta and British Columbia with approximately 900 km of new, NPS 30 pipe." Reference: Application by Trans Mountain for Approval of the transportation service and toll methodology for the Expanded Trans Mountain Pipeline System (June 29, 2012).