Chris Hedges on 'the grotesque visage of a collapsed democracy' 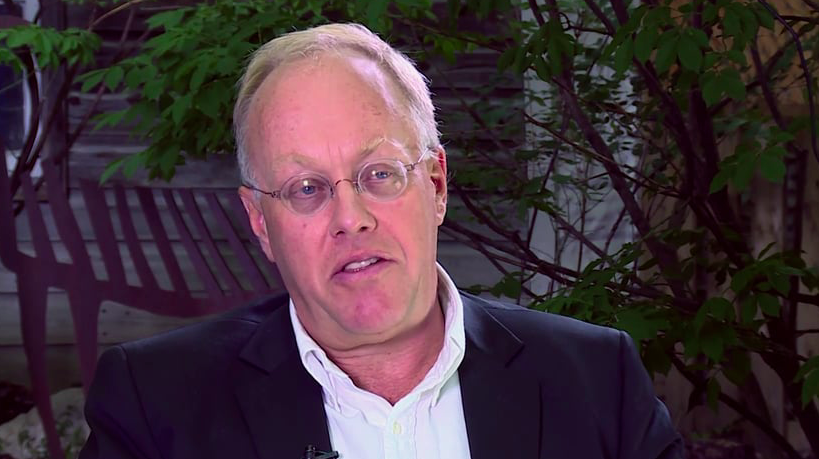 The system has 'vomited up a monster'

You have described a predicament for America going back 45 years, which you characterized as: 'the creeping corporate coup d’état that 45 years later is complete'. Sounds like you think we’re in deep, deep trouble.

Yes. Basically, the façade of democracy has been removed. The dysfunction of the system has vomited up this political monster.

It’s already a kleptocracy, it’s done with a veneer. Sheldon Adelson will donate huge sums of money and suddenly all the people who get money ban internet gambling. For the Trump family, it will be personal. They will steal. He has ignored every ethics procedure from not releasing his taxes, to overseas business interests, raising the price of Mar-a-Lago membership, and on and on. But the system was already corrupt.

What are your thoughts on Canada’s role in this and how Canada could be affected?

Canada’s always a few years behind. Trudeau functions much like Obama. That kind of liberal veneer, while pushing through corporate interests and power at the expense of the citizenry. He’s done nothing to disrupt the surveillance apparatus.

Wouldn't you rather have Trudeau than Trump?

Eventually you end up with a Trump. These are liberal democracies that cease to function. The institutions that address the most basic rights and grievances of the citizens don’t work. They serve corporate power.

You have said, ‘Donald Trump is not an anomaly. He is the grotesque visage of a collapsed democracy.’

It is collapsed in the sense that the institutions that make democracy possible, that make incremental and piecemeal reform possible, do not function.

So, for instance, you have a financial collapse from people who are selling no-document mortgages. There’s not even pretense that anybody is going to be able to pay these things back. The institution dices these up as investments, which many knew would collapse, and the victims are left underwater in their houses and facing bank repossessions.

The media is completely corporatized. You have roughly half a dozen corporations that control almost everything most Americans watch or listen to. The problem is they don’t challenge corporate power, their revenue stream is corporate.

The demagoguery of Trump is directed at Muslims and immigrants, and the demagoguery of the left is directed at the FBI, Comey and the Russians. But the real problem is the reconfiguration of the country into an oligarchic corporate state where half the country lives in poverty and cities are selling off things like sewers. And nobody is addressing the actual force that is deforming the country. Those who do address it are locked out of the debate. They're pushed to the margins, where they are not heard.

It’s not Trump… it’s the decay of a democratic system that gives us Trump. It’s the natural progression when any cabal seizes power whether it’s oligarchic, monarchic or corporate — the system is in a kind of paralysis and that’s how you get a buffoonish figure like Trump or the Nazis. It’s not going to end well.

There are no democratic institutions left in the U.S. that are authentically democratic. We have to start from scratch. Not that we have enough time, but that’s what we have to do.

What can ordinary people do that’s meaningful and powerful on behalf of democratic institutions, in your view?

Mass action and civil disobedience is all we have left. What they’re trying to do at Standing Rock right now.

What is the role of independent media?

You certainly want to protect public broadcasting, your health care services, all of those institutions that make a democracy possible and are pretty much gone in the U.S.. Roll back the surveillance and security apparatus in Canada. And address the issue of corporate power — that's a global fight.

You also said in January: The days ahead will be dark and frightening.

Every day is darker. Today we get the announcement we’re hiring 10,000 more ICE agents and they’re beginning massive round ups of undocumented immigrants. Every day is one step closer to a naked, authoritarian police state.

What do you think about FB and social media in general:

Facebook has been a gift to the security and surveillance apparatus. We willingly give them all our information. And also, people think they’re doing activism online. I have limited time and I still read books. You can’t do activism online. There’s only one place to do it: in the street, that’s it. You can use social media as a form of logistics, where to meet, etc., but even that has a negative repercussion, you can create flash mobs without movements. We need the movements. Hundreds of thousands of people can protest the day after the inauguration and then it vanishes like a vapour cloud.

Why fight if you can't win?

What are you reading?

I’m reading The Deep State and Insane Clown President. I read everything, I read a lot.

How many books a week?

It gives your life a meaning and you use whatever privilege you have to attempt to stand up to prevent the vulnerable from being crushed.

You have high praise for the documentary: ‘I am not your Negro’, and you quote James Baldwin who says: "History is not the past. History is the present. We carry our history with us. To think otherwise is criminal.” Do you think it's 'criminal to forget history?'

The history of the white race in America is criminal. It’s a criminal history and it’s primary message was, we have everything and if you try and take it away from us, we’ll kill you. At a moment of diminishing resources when the white race turns on ourselves, we better understand who our elites are. It’s about exploitation, violence, greed and that’s been our history from our relationship with Native Americans to slavery to Vietnam to whatever we’re doing in the Middle East. It’s not about bringing democracy to anyone.

What do we do to African Americans in this country? It’s just slavery by another name.

Why are people susceptible to propaganda, despite the lessons of history?

People are susceptible to self-exaltation. It’s what nationalism and the story of America is about. Self reflection is painful. Those who perpetuate that myth have a ready and willing audience.

Facing unpleasant and unvarnished truths about our society and ourselves.

But you’re not going to get an honest discussion about America and who America is from media owned by General Electric and Viacom.

You talk about a "creeping corporate coup d'etat" that is now complete 45 years later. What did you mean?

You had the opening in the sixties. What’s happening now is in response to the sixties. The business interests, the corporate interests, the military industrial complex, what’s happening has been funded and directed by people who were responding to the Black Power Movement, the Civil Rights Movement, the Women’s Movement, all these movements who gave a voice to people who didn’t have a voice in American society.

That time was also Vietnam, so if you were Vietnamese you saw the face of an empire that hasn’t changed.

I was recently on a panel with Laure Waridel who says: “We are hoping that there is this leader that will save us, but we all need to take action.” What do you think of that statement?

Chris Hedges will be speaking in Vancouver Friday, Mar. 3, 2017 at 6:30pm, at the event: After Trump and Pussy Hats, St. Andrew's Wesley Church

Great article!! Chris Hedges and the likes of the people at The Intercept are our conduit for progressive thought these dark days. They identified from the beginning that B Clinton, Obama, and H Clinton were furthering the corporate agenda and were not at all carrying the progressive flag.

Can the National Observer be that for specific Canadian issues? For a start it needs to be clearly understood that while Trudeau has sunnier ways than Harper he will not fundamentally change the laws and institutions that are incrementally marching us toward the same dark rabbit hole. Look at the so-called non-conservative governments in BC, AB, ON, QC, NB, NS, PEI, and NL. Public sector sell-offs, ending collective bargaining, un-insuring medical procedures, "public-private partnerships". Ha! Hardly a progressive bone in the lot.

"Wouldn't you rather have Trudeau than Trump?" Yes, but wouldn't we rather have a true progressive group/party that will stem the corporate kleptocracy? Remember a conservative government in Ottawa and Alberta, despite all of its rhetoric, could not deliver the pipelines. Trudeau and Notley have progressed much much further faster. Agents of change? Not the change we progressives want.

Great interview. Clarity. It's life versus power when power has been purchased by an ideology that is totally anti-life.

Great interview with Chris Hedges. Thank you Linda. This is why I support the National Observer because we need to be critical of corporate power.

I encourage anyone who go listen to Chris speak to do so. I heard him talk when he was touring for his "Wages of Rebellion" book. He's always very sobering but inspiring.

We really need to be on guard in Canada. The Liberals and Conservatives are both corporate parties. Trudeau has been able to pass things that Harper otherwise couldn't. He can get away with it thanks to his "sunny" ways strategy.

The age old problem of the Liberals campaigning left and governing right never seems to change.

We need to do everything we can to protect our democracy from these corporate forces and we need to address our own racist history here in Canada.

Thanks Linda. Days of

Thanks Linda. Days of Destruction, Days of Revolt. Chris is right, our only hope is to refuse, revolt and define a future. Just look at what the "so-called" President is doing to to the Standing Rock Sioux people in North Dakota. Our indigenous peoples are so strong, so courageous. We must support them and force Trump to be seen as the simpleton he truly is. I just can't stop writing about this short-sighted, kill-the-citizens President. Not that Trudeu is any better.