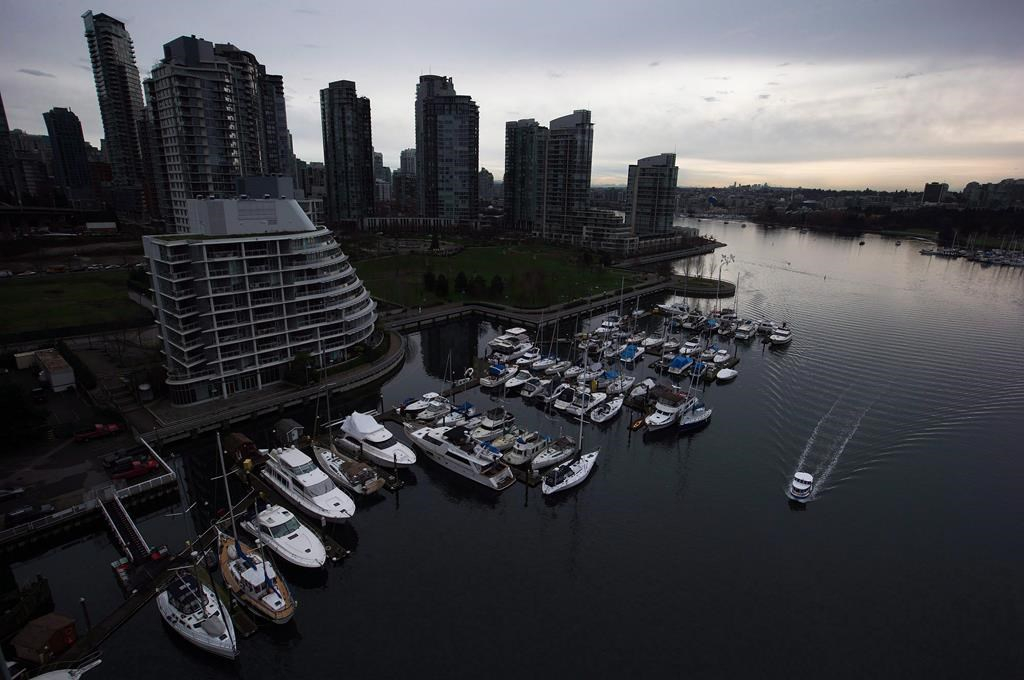 A water taxi passes by a marina and downtown condos while traveling on False Creek in Vancouver, B.C., on Wednesday, February 11, 2015. File photo by The Canadian Press/Darryl Dyck
Previous story
Next story

From the slow-paced, tree-lined streets of downtown Charlottetown to the modern, western architecture of metro Vancouver, Canada's urban waterfronts are a beacon for condo developers, tourists and everyone in between.

But even in best-case scenarios for global warming, a new series of interactive maps that illustrate the impact of rising sea levels suggest Canada is facing a mind-boggling challenge to keep such popular and often historic neighbourhoods from becoming lost at sea.

John Clague, an earth sciences professor at Simon Fraser University in British Columbia, says thanks to global warming, our oceans are getting an average of 3.3 millimetres higher every year, up from 2 mm a year in the latter half of the 20th century.

The United Nations predicts the world's oceans will be at least one metre higher by the end of the current century. After another 100 years, it could be four times that.

"I call it a disaster in slow-mo," said Clague. "It is really a huge problem. It's a global problem and the cost of dealing with this or not dealing with it, depending on what happens, is enormous."

The U.S.-based organization Climate Central has created interactive maps (http://bit.ly/2j3lJu3) that show how Canadian cities could look if the average global temperature rises between one and four degrees Celsius by 2100. All of the scenarios are based on no mitigation efforts taking place, although some areas do already have existing dikes or protections.

The world has already passed the one-degree threshold. The Paris climate change accord aims to stave off 2 degrees by the end of the century, but the United Nations warned last week the world has committed to only one-third of the emissions cuts necessary to meet that goal.

The Climate Central maps show that in Charlottetown, the harbourfront will be at risk at two degrees. At four degrees, homes several blocks from the waterfront would become oceanfront properties. Lennox Island, a First Nations community off the northwest coast of P.E.I., could lose its bridge to the mainland in the best case scenario. At worst, the entire island disappears beneath the sea.

In Halifax, the harbourfront, port and rail lines could all be submerged. The city of Charlemagne, Que., east of Montreal, could lose entire neighbourhoods to the St. Lawrence River at two degrees, while at the four-degree threshold, the birthplace of singer Celine Dion has almost no dry spots at all.

The problem could well be most dire in Vancouver, said Clague.

"Metro Vancouver is the most vulnerable urban area in Canada to sea level rise," he said. "We have about 250,000 people living within about a metre of mean sea level."

At two degrees, hundreds of homes and businesses in North Vancouver would be underwater, as would large parts of the False Creek waterfront. At four degrees, famed Stanley Park becomes an island and the Vancouver neighbourhoods of Mount Pleasant and Fairview become a sea of blue.

Richmond, B.C., is only one metre above sea level now, but director of engineering John Irving said Wednesday the city has been preparing for sea level rise for years. Between building up existing dikes and building "superdikes" that are more than 50 metres wide, the city is getting ready as fast as it can, he said.

In most communities, flood prevention is in the early planning stages, focused largely on preventing new development in high-risk areas and building dikes around existing areas to try and keep them from harm.

Then there are the costs: Clague said in the Fraser Delta area alone, it would cost a projected $10 billion to build up against coastal and Fraser River flooding.

The Fraser Basin Council in 2016 found 71 per cent of its existing dikes were vulnerable in the event of a major coastal flood or on the Fraser River.

The world has already passed

The world has already passed the 1.5 degrees threshold.

I think what Cynthis means is

I think what Cynthis means is that even if humans emit zero greenhouse gases from now on the temperature rise will be 1.5 degrees C according to the last IPCC report. I put this to my MP and asked how the Minister of the Envirnment and Climate Change could say we would strive for 1.5 C. I did not get an answer.

The idea that in the worst case scenario the sea level rise will be 1 metre by the end of the century comes from the last IPCC report. One needs to read the fine print which indicates it could be very much larger; the reason is that the IPCC only reports what it is reasonably confident of. Something like the melting of the West Antarctic glaciers people do not know how to model, thus are not included, but could lead to an additional 3 metres of sea level rise. See “High Tide on Main Street” by John Englander.