Regan Boychuk: Alberta NDP’s royalty review was scandalous and they just made it worse 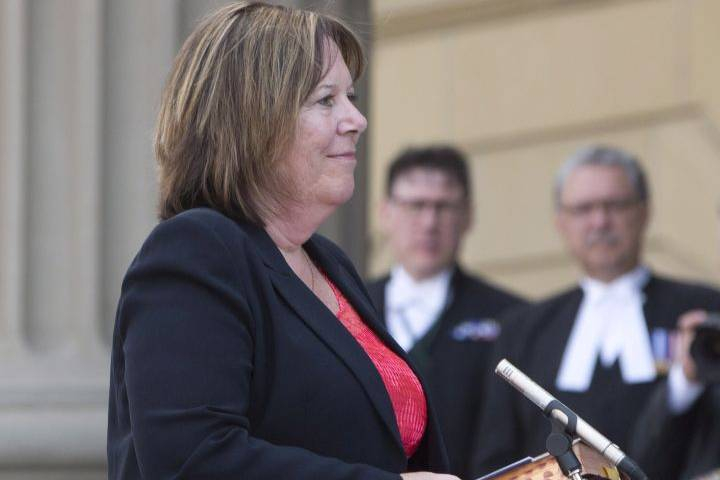 Alberta Energy Minister Margaret McCuaig-Boyd is sworn in during ceremony in Edmonton on May 24, 2015. File photo by The Canadian Press.
Previous story
Next story

The Alberta NDP’s recent royalty review was a scandalous gift to industry at Albertans' expense. Incredibly, the Notley government has now made matters even worse with Monday's announcement of two new subsidy programs, both gobsmacking examples of corporate welfare.

Even before these latest giveaways, Albertans were already getting absurdly low rates for their resources. The new corporate subsidies raise the spectre of billions in oil reclamation costs looming over Alberta taxpayers.

During the last campaign, the NDP promised to review royalties. Once in power, they did so. But the NDP's new royalty regime actually lowered rates that former Alberta Energy executive director Barry Rodgers had concluded were “too low ... the lowest royalty rates in the world.”

From a high of over 40 cents under former premier Peter Lougheed, Albertans are now collecting only 3.6 cents of every dollar’s worth of our oil and gas:

The story goes back well before the NDP's election win. The former Progressive Conservative government had taken desperate measures to regain favour with the mighty oilpatch angered by 2007's royalty review - the only credible, transparent, and independent review ever conducted in Alberta. The PCs set up a new royalty review in 2009-10, which operated behind closed doors and was opposed by most Albertans, including two-thirds of PC supporters. It cut oil and gas royalties dramatically and Alberta has been broke ever since.

The NDP came to power in 2015 on a platform which promised to review these pitifully low royalties. Amazingly, the NDP’s review made a terrible situation even worse. The NDP left the royalty review in the hands of two bankers deeply entwined with Alberta’s oil and gas industry. First to be appointed was Dave Mowat, president of the Alberta Treasury Branch (ATB) - a hybrid crown corporation/financial institution. He was joined in July by the chief economist of Canada’s largest energy investment bank, ARC Financial’s Peter Tertzakian.

Alberta would have done well to heed the sage advice offered by Fort McMurray First Nations, cautioning the review about “relying on the narrow, self-serving perspectives that are likely to come from financial institutions.”

"The inclinations of these institutions will always be to want to see more attractive investment opportunities, from which they will benefit by [providing industry] with financial services. They are not likely to provide unbiased, objective views on matters such as royalties. We learned only too well from the 2008 global economic collapse that started in financial institutions that these institutions are neither good at understanding the implications of their activities in the rest of the economy, nor managing their own activities to ensure financial and economic stability," they said.

All of which brings us to Monday's announcement of two new subsidy programs for industry. The so-called Enhanced Hydrocarbon Recovery and Emerging Resources subsidy programs certainly serve the interests ATB and ARC. They most certainly do not serve the interests of Albertans: previous stimulus programs have cost billions without producing the promised jobs or increased drilling activity which are driven by commodity prices, not subsidies.

Mowat chaired the review panel and was the process’ public face. His ATB has been struggling with bad loans to oil and gas companies and the losses suffered by mounting bankruptcies:

The Enhanced Hydrocarbon Recovery subsidy program is aimed at keeping aging wells squeezing out just enough oil and gas to postpone the reclamation costs that will eventually threaten virtually every producer with bankruptcy.

Alberta regulators have allowed hundreds of billions of dollars in unfunded reclamation liabilities to accumulate, posing heavy risks to bank loans if producers were ever required to fulfill their legal responsibilities to clean up contaminated sites. This subsidy will ensure Albertans only get paid a pittance for the dregs of their aging fields, while producers and their banks get to postpone long overdue reclamation up to another seven and a half years.

The Emerging Resources subsidy program plays particularly well into the business model of Tertzakian’s ARC Financial, which invests in emerging oil and gas companies. ARC lends a new or expanding company money to buy drilling rights and drill wells to “prove” new reserves it can use as bank collateral to borrow against.

Tertzakian was the main author of the review panel report, which was dubiously premised on the supposed fact industry's not making any money. The entire theme of the panel report centered on "an uncomfortable reality: Alberta oil and gas producers are at risk of gradually putting themselves out of business unless operating cost inflation is arrested."

Tertzakian's presentation to the expert groups in October asserted we faced the spectre of ghost towns across the province because the oilpatch was losing money. That industry doesn't make any money is, of course, absurd -- particularly coming from ARC's Tertzakian.

​When private equity firms like ARC lend an oil and gas company money, they expect their loan repaid with a 200 per cent profit within five years. But no one makes any money?

If we want to put unemployed riggers back to work, they should be cleaning up the hundreds of thousands of wells regulators have allowed to accumulate without proper funding or timelines.

Alberta already has much more oil and gas than we can responsibly produce, new reserves are only needed for financial gamesmanship.

Alberta once had strong voices holding officials to account on these issues: the NDP opposition, the Parkland Institute, and the Alberta Federation of Labour. With many of them now in government or aspiring to be, those remaining are reluctant to criticize their friends in power.

Without a collective voice, Albertans need to raise their own.

There are so many

There are so many contradictory statements in this article that it's difficult to know where to start. "The Enhanced Hydrocarbon Recovery subsidy program is aimed at keeping aging wells squeezing out just enough oil and gas to postpone the reclamation costs that will eventually threaten virtually every producer with bankruptcy."

But raise the taxes on what is produced ?

I could be wrong, but I think

I could be wrong, but I think the NDP must have broken records for the fastest turncoats and utter betrayal of everything they claimed to stand for. The first thing she did was tell O&G "it's business as usual" and that one she stuck to. Save the planet while increasing emissions by over 40%? Exterminate species to "save" others (but not from industry)? Save The Castle area but allow OHVs, industry, hunting, etc? Clearcutting Ghost Watershed now okay, too? 500 million corporate welfare to build fertilizer plants so O&G workers keep jobs? I can't call them wolves in sheep's clothing because we know what they do to wolves. They have ensured that they will be extinct after 2019 and that there will Never be another non-Conservative government in Alberta. Thanks for nothing.

Terrific article - the reality of the oil and gas industry's control of Alberta. The new royalty regime will encourage more horizontal hydraulic fracturing ("fracking") which is already adding greatly to climate changing emissions of methane and other gases, polluting air and probably contaminating water with unknown chemicals, heavy metals and possible radioactive materials. The evidence on fracking is clear now: (http://www.psehealthyenergy.org/site/view/1233)
but is being ignored in Alberta. No one is being warned of the health effects they are likely to suffer when this dangerous and destructive activity comes to their region. Experts have warned that water in this province will no longer be pure, but the evidence - based practice declared by the Alberta Government does not seem to apply to fracking.