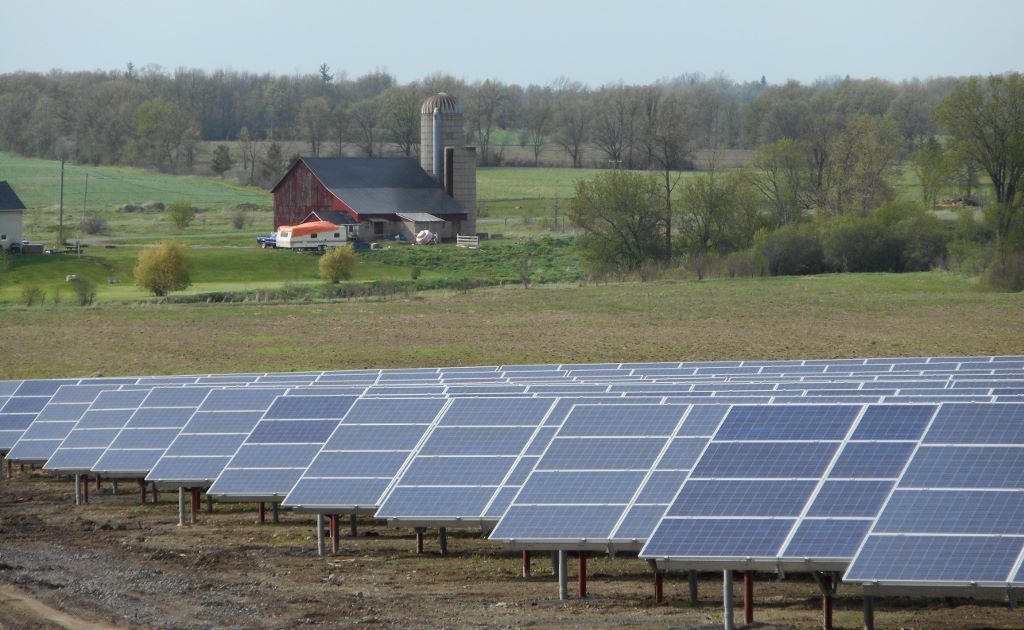 The message to Canadian clean tech firms is clear: any major growth strategy will likely have to involve going abroad.

The United States, India and China, the largest electricity markets in the world, were “collectively responsible for half of global clean energy investment in 2016,” says the research by Clean Energy Canada, an initiative of the Centre for Dialogue at the B.C. university.

But in Canada, where over 80 per cent of the power grid is already driven by emissions-free sources, clean energy investment was down for the second year in a row, said the report, “The Transition Takes Hold: Tracking the Energy Revolution 2017.”

"Canada is home to numerous clean energy technology and service companies, which are cutting their teeth at home but must ultimately look abroad if they are to continue growing," said the report.

Investment deals fell from over $4 billion (all figures CAD) to just over $2 billion relative to 2015, the report stated.

Some provinces have reached significant amounts of renewables

A spokesman from the think tank said this was mainly because a lot of major markets in Canada, such as Quebec, Ontario and B.C., have reached their capacity when it comes to renewable energy supply needs.

“We saw a real surge in clean energy investment in projects being built over the past four to five years, predominantly in Quebec, Ontario and British Columbia,” said Dan Woynillowicz, policy director at Clean Energy Canada, in an interview.

Those provinces have now built out significant amounts of renewables, he said. “We need to be looking at what technologies, services, and expertise Canadian companies have that they can be selling into those other markets.”

But the report said "activity in the sector isn’t going to grind to a halt," as there is potential for Canadian growth in the renewables sector in Alberta and Saskatchewan, which have both set objectives to boost their renewable energy by 2030, 30 per cent and 50 per cent respectively.

There are 11 Canadian firms on the 2017 Global Cleantech 100 List by San Francisco-based Cleantech Group, five of which are in the clean energy field, the report also points out, including one in energy storage, Corvus Energy.

“We see numerous Canadian companies in the storage space, like Hydrostor and NRStor. They are at the cutting edge of energy storage, which is likely to emerge as a really significant component of electricity systems, particularly in countries that don’t have hydro,” he said.

Engineering capacity, or how to integrate renewables into the electricity grid, as well as services like software to manage smart grids, are other areas where Canada could excel, he said.

In the next three years, China intends to double its solar power capacity relative to 2015, to 110 gigawatts (GW), and boost its wind power by half, to 210 GW, the report states. It expects to invest $480 billion to do so.

Meanwhile, India is hoping to triple its capacity to 175 GW of renewable energy by 2022, a feat expected to require almost $133 billion.

Asked about Trump’s executive order on CTV Power Play Wednesday, Environment Minister Catherine McKenna, who was in New York on Monday promoting "potential investment opportunities in the renewable and clean-technology sector" at the Wall Street Green Summit, said the industry is trending towards renewables.

"Business are looking at what are the new opportunities in renewables,” she said. “The market has moved towards renewables, towards clean growth, and businesses know that. They want the certainty, they want to make sure they’re doing the right thing, but they see the real business opportunity.”

The U.S. made close to $60 billion in clean energy investment in 2016, its second-best year ever, the report states, and clean tech appears to be bipartisan: it says the top 10 wind-energy producing Congressional districts are represented by Republicans.

“For starters, his effort to cancel the clean power plan is going to be a process that will wind its way through the courts for years—it probably won’t even be done by the end of his first term,” he said.

In addition, regardless of the short-term policy environment, U.S. utilities will have to make long-term investment decisions for a new piece of infrastructure, said Woynillowicz, and increasingly they are choosing gas, wind or solar after considering the trend of the coal industry over time.

Renewables in Alberta and Saskatchewan an opportunity

In the Prairies, Alberta is phasing out coal-fired electricity generation, while Saskatchewan reached an equivalency deal with Ottawa for emissions reduction.

Woynillowicz said he “fully anticipates” that the “full suite” of Canadian renewable energy developers active in B.C., Ontario and Quebec will be keen to get into Alberta and Saskatchewan’s efforts to move on renewables.

As for Trump’s plan to bring back coal jobs in America, he said he doesn’t see it affecting Alberta’s plan to phase out coal.

“It’s to the benefit of Canadians from a health perspective to be phasing out coal-fired power,” he said.

As an Indentured Boilermaker

As an Indentured Boilermaker who's Union Jurisdiction is the building of Energy Infrastructure, and new, plus the repairing of Air Emissions Equipment, overall the coal mining jobs he proclaims will benefit the US are a blow to ALL Building Trades, including Iron mines, Steel mills and allied Fabricating Shops who fabricate the steel components, catalyst and even cloth bags for Dust Bag Houses. Electrostatic Precipitators, Cyclones, SCR Nox Scrubbers, Stainless Steel Stack Scrubbers that barely last a year corroded from the acids they remove from flue gases.

Someone on Cbc Radio this morning was in support of President Trumps dismantling of the EPA, stating all this man made climate impact was new age bunk, even mentioning it was a Non-Issue a hundred years ago in 1917. Well, the London Smog that killed hundreds of people and smog in New York City at the same time that was burning holes in woman's nylons, well that's just Fake New"s.

Thank you so much, National Observer for bringing some sanity to Public News, with some serious Fact Checking.

The large cranes needed in a blade change out are very expensive, plus the blades come from faraway places, and if this issue has to be repeated countless times in their 20 Year FIT Contract, someone is going to be shorted in their investment returns, irregardless of the outrageous amount paid per Kw.

Ontario's Peak Rate of 0.18 cents a Kw is 353% more than Base Rate before $mart meters. As human beings we have a right to affordable forms of energy. On Ontario's first Cycle of Smart Meters it was the Winter Rate Schedule. It cost 98% to cook breakfast and supper. Delivery was additional to that. My February Hydro one Bill has my energy charge at $63.46, with Delivery of $62.62 + Regulatory Charge of $5.45, + HST, $17.10, minus a PST Rebate of $10.52 Credit. Delivery is a new exploitive strategy to pick our pockets.

The less you use, the more you pay for Delivery. My October Bill which was only running a sump pump with no electric heaters being used, the Delivery Charge was 2.15 X the energy usage. As I am only using the electricity to maintain a basement from freezing with electric heaters with the upstairs sealed off. Timers are set to start at 7:05 pm and to shut off at 6:55 am in the morning before Peak Rate kicks in. We have NO natural gas, and the taxpayer funded 30", Line 1 built by the Northern Ontario Crown Pipeline [1957] Corporation is only about 1000' feet away across the highway.

I just phoned my former neighbour to Fact Check, if in the 70's, she was ever informed by TCP that they were doing Hydrostatic Testing in the line in the fields beside their home. No she was not! There were 2 ruptures in the pipeline in the pastures where they and their neighbour had cattle grazing. These ruptures are like a bomb going off, levelling trees adjacent to the Pipeline Right of Way. I may have been away at the time working on Hydrostatic Testing in other areas. I just became aware of this about 3 months ago when asking their former neighbour if he was interested in having natural gas for his home, and as to whether he had ever heard of Farm Taps. It was then I learned of the 2 ruptures while under water testing in the 70's on a pipeline which was only 15 years old.

Back on topic, I somehow feel that the whole story on renewables is not being told publicly. Solar Farms on FIT Contracts are paid 0.80 cents a Kw in Ontario, only 1,500% more than our Base Rate Pre-$mart Meter$. Multiply 0.051 cents X 1500 = 76.5 cents + 5.1 cents = 81.6 cents a Kw. There are people in Ontario with electricity bills as high, or higher than their Mortgage payments. And straying off a bit, when i drove to Geraldton ON for the CVNW who had Intervenor Status for the NEB on the Energy East Conn/Version Proposal, a young lady in Jellicoe, had a $1,500.00 Hydro Bill for December, when Jellicoe has hosted a TCP Compressor Station for 60 years.

We are learning thanks to National Observer that Trans Canada Pipelines has no moral compass. They were leased Line 1 in 1957 which was taxpayer funded, a Golden Goose, which they ran away with and never looked back. I become ill when i hear of the 20 plus LNG Export Terminals planned for BC, which will need a Spider Web of pipelines, which the BC government exploited Hereditary Blood Line Chief Monarchies, to negotiate without consultation of their peoples. did they even negotiate that all their First Nations communities be serviced with natural gas before exporting to nefarious governments like the Malaysian Crown owned PETRONAS, proponent of the LNG Terminal at LeLu Island at Prince Rupert, when over 30% of Ontario has never been serviced with natural gas. More on Energy Poverty at; www.ontariruralgrowth.ca

Of even more serious nature is our Prime Minister who parlays at the Climate Accord in Paris' then comes home and approves this pipeline to Compress LNG which will be supplied in large part by Fracked methane, which has a habit of being Vented Off and burnt [-66%] inefficiently in Flare Stacks, and all to often breaks through the earths crust sickening humans and animals and also causing seismic quakes. The proponents of this madness must be members of Club Armageddon.

On energy recovery BC and Alberta Oil and Gas Wells should be mandated to collect all gases and forced to pipe them to Gas Co-Generation Plants for electricity production. It has been stated that Africa could produce 1/2 its countries electricity needs if flare and vented gasses were captured and utilized. Until the Wild West mentality is lassoed the Jessica Ernst, Slickwater story on YouTube and Diana Duanheimer stories will be multiplied more times as more people fall ill from these vagabond operations. The AER in Alberta is Industry funded and Self Regulated, a Straw Man Fallacy duping the public. These charades must be dismantled and our asleep at the switch Provincial Environment Ministries, might as well be vaporized with new Directors that will practice "Due Diligence" and "Duty of Care" as we so foolishly have believed they are there for.

Fool us once, yes, fool us again, well it's getting harder.