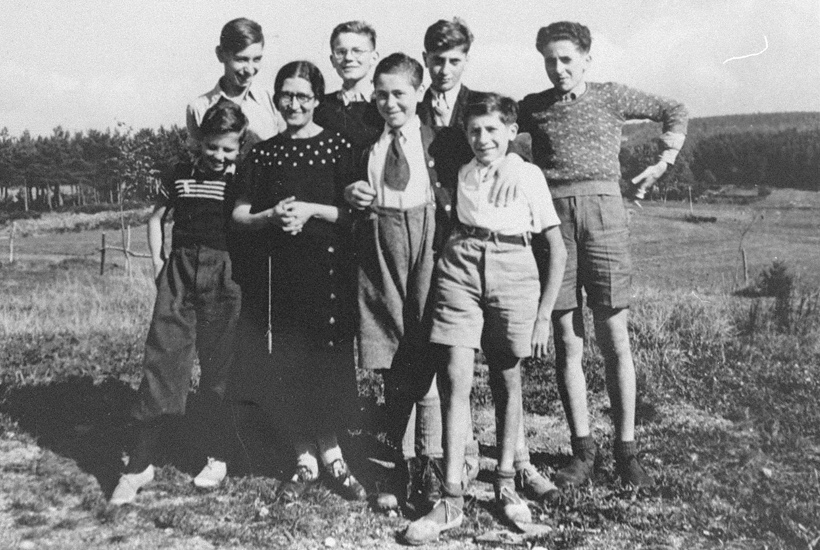 Some of the many Jewish refugees, circa 1941, welcomed with open arms by residents of Le Chambon-sur-Lignon in southern France. Photo from the US Holocaust Memorial Museum, courtesy of Elizabeth Kaufman Koenig
Previous story
Next story

It is always sombre for those who observe Holocaust Memorial Day (aka Yom HaShoah), but especially so this year given recent political developments.

This is why I am so glad that my son’s grade five teacher was finally ready to share the incredible and inspiring story of the heroism 75 years ago of her family and of their entire mountain village in southern France.

The Village That Saved the Jews

Le Chambon-sur-Lignon. I couldn’t believe it. I’m a bit obsessed with Nazi resistance stories, and had read about how this mostly Protestant village had risked everything to save the lives of more than a thousand Jews. So, I was astounded to learn two years ago that Sandrine Goble’s great-grandparents and grandparents played important roles in one of the most successful rescue efforts of the Second World War.

In an email response to a query about how she planned to cover the Holocaust in her grade five/six class at École Mount Prevost Elementary in Duncan, B.C., Sandrine added as a footnote that she thought that I (as the only Jewish parent of her students that year) might be interested in a documentary called “Weapons of the Spirit” that included an interview with her grandparents about how they assisted her great-grandfather in leading the resistance in Le Chambon.

More than two years since that email, I’m still pretty much the only person in our community who knows about her story. “It wasn’t something you would discuss outside the family,” explains Sandrine, who doesn’t like to draw attention to herself.

Her humble, unassuming nature is a trait that she shares with her ancestors, a trait that seems to have been key to the miracle that happened in Le Chambon.

At noon on Jan. 1, 2000, a small group of people gathered at the main bridge in Le Chambon. The gathering fulfilled a pledge made 56 years earlier during a walk in the nearby woods. There, a group of 10 Jewish youth had agreed upon a time and place to meet if they managed to survive the war--which they did thanks in large part to Léon and Antoinette Eyraud.

These were the great-grandparents of Sandrine Goble and, with the help of their adult daughter Aline Caritey, they ran the Pension des Ombrages, a boarding house/hotel near the train station that served as one of Le Chambon’s several safe houses for Jews. It was often the first place refugees came, despite it being right across from the local Nazi headquarters.

In those days, Le Chambon was a village of secrets, and with the exception of the oldest youth, a 14-year-old who served as a messenger for the resistance, the Jewish refugees sheltered by the Eyrauds didn’t know that Léon had another identity.

He was also Père Noël (“Father Christmas”), leader of the resistance in Le Chambon. (He chose his code name in part because it’s Léon spelled backwards).

Léon, born in 1883, was good friends with Le Chambon’s famed Pastor André Trocmé, who championed nonviolent resistance to the Nazis. Like the majority of Le Chambon residents, they both were descendants of Huguenots, French Protestants who followed the teachings of John Calvin.

According to a 2001 biography of Trocmé, “Léon believed that some level of armed conflict was inevitable in war and it was best to be prepared. His personal conscience, however, abhorred unnecessary death and guided him to act without violence….He bridged the gap between nonviolent resistance of his village and the militant activities of Resistance fighters.”

After reaching out to leaders in the French underground sometime in 1940, Léon became the contact point for local intelligence, tracking movements of Germany military personnel in the region. The BBC was in regular contact with him regarding supply drops, and he had caches of weapons hidden throughout the stone walls of his pension. Resistance fighters (the Maquis) would pass through there, although in this village of mostly pacifists, Léon made sure they didn’t appear in uniform or bearing arms.

Righteous Among the Nations

Sandrine’s great-grandfather also supported a network of forged papers for Jewish refugees, who heard about Le Chambon through word of mouth and whose numbers swelled after the German occupation of the region began in November 1942. Many of the Jews (who originated in various countries such as Belgium, Poland and Germany) were aided on their way via an “underground railroad” to safety in Switzerland.

A few weren’t so lucky, such as a number of Jewish students arrested during a Gestapo raid in June 1943. Along with their teacher Daniel Trocmé (André’s cousin), they died in concentration camps.

Aline, who hardly ever spoke about the war, did tell her granddaughter (Sandrine) once about how afraid she was that the youngest kids in hiding would make noise when Vichy or German soldiers would inspect the hotel. She also told Sandrine that she loved the refugee children as her own.

In 1987, Aline’s parents Léon and Antoinette were recognized as Righteous Among the Nations, the highest honor bestowed by Israel’s holocaust center to non-Jews for their efforts to rescue Jews. Three years later, the entire village of Le Chambon was so honoured.

The Right Thing to Do

The big question about Le Chambon is why did it happen there and hardly anywhere else.

It seems there was a confluence of factors. Le Chambon has geography in its favour; it is located in a mountainous region where travel is very difficult a good part of the year. Fortuitously, and for reasons not entirely clear, the local German commandant was not particularly vigilant about rooting out the Jews he surely knew the villagers were hiding. Similarly, Sandrine’s grandmother said in interviews that she thought the German soldiers convalescing right across from her family’s pension were probably relieved to be away from the fighting and perhaps were infected by the village’s pervading spirit of nonviolence.

Probably above all, it had to do with the fact that the village was long practiced in doing the right thing. Largely the descendants of Huguenots, who knew what it was like to be persecuted in a Catholic country (it should be noted that the Catholic minority in Le Chambon apparently were equally willing to help), the villagers had recently taken in refugees from the Spanish Civil War as well as children from a nearby mining town.

While the village was blessed to have leaders such as André Trocmé (who after being arrested once, eventually had to go into hiding) and Léon Eyraud, when “the Old Testaments” arrived, the residents of Le Chambon didn’t ask questions; they simply took care of those in need--as they always had.

In every interview I’ve watched or read, the humility of Le Chambon residents stands out.

For example, Adolphe (he was part of the resistance with his future father-in-law) and Aline Caritey were very reluctant to be interviewed for the 1987 documentary “Weapons of the Spirit: Conspiracy of Goodness in Le Chambon-sur-Lignon.” (In this abbreviated video-of-a-video version, the segment with Sandrine’s grandparents begins at 30:10.)

In fact, she remembers her grandmother being upset many years later, when the local tourism industry began touting the heroic deeds of Le Chambon. “She told me: ‘We have wide-open spaces, and so is our spirit. This is just something that people did; it’s not something they (the tourist operators) can own.’”

A Lesson Needed Now More Than Ever

With racism apparently on the rise, including anti-Semitic images--such as the box of an Anne Frank puzzle next to a pile of ashes--making the rounds of elementary school students, Sandrine knows that she needs to overcome some of the modesty she inherited from her ancestors.

In addition to agreeing to this article, she is considering how else, in a way that she’s comfortable, she can share her family’s story of doing the right thing in the face of tyranny.

“Students need to see that it (the Holocaust) is not so far away, that there are other forms of genocide today,” Sandrine says. “Tolerance is needed now more than ever…. And we need to think of how we can be of help; instead of whining about problems, offer solutions.”

What a wonderful story of

Beautiful story. Thank you for sharing and your continued kindness.