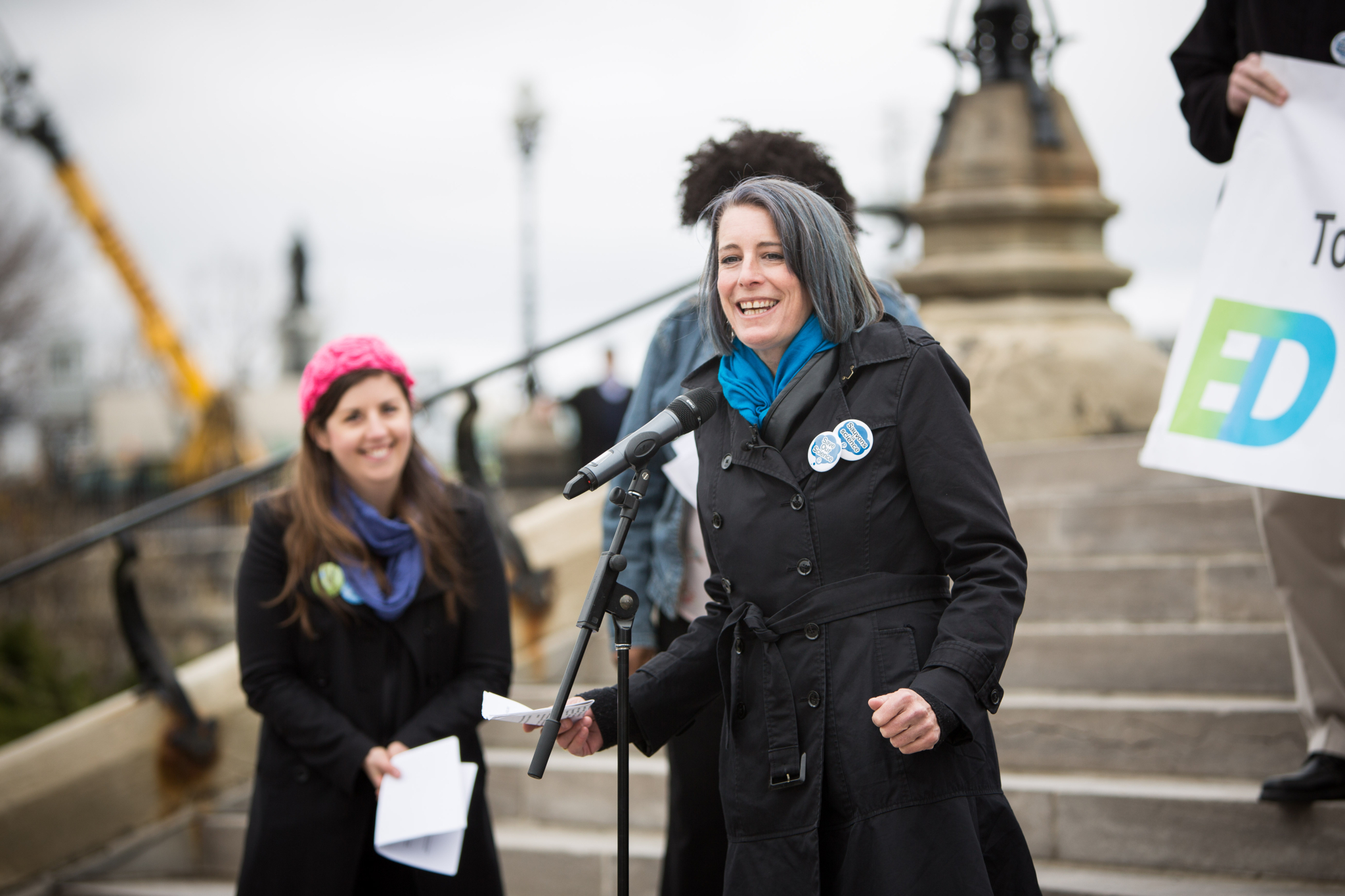 Debi Daviau, president of the Professional Institute of the Public Service of Canada, speaks at a March for Science rally on the front steps of Parliament Hill in Ottawa on Earth Day, April 22, 2017. Photo by Alex Tétreault
Previous story
Next story

It has been a long time coming, but Canadian government scientists anticipate they are only a few weeks away from signing deals that would guarantee their right to speak freely. And once the signatures are on paper, the union believes this right will be protected, regardless of who is in power.

The Trudeau government reached four deals last December with the largest labour union representing federal scientists, the Professional Institute of the Public Service of Canada. Two of these agreements included sections that protect freedom of speech and prohibit muzzling for nearly 10,000 employees working in research and science, the government said.

The president of the union, Debi Daviau, said her members have ratified those deals and she expects them to be signed by the government within weeks.

"We’re just trying to get a signing date," Daviau told National Observer on Parliament Hill in Ottawa after a rally on April 22. "It looks like it will be signed by mid-May and then we’ll be in a position to start implementing those important policies. But the muzzles are already off and this was just an assurance that no government could ever do this to us again without having to fight us at the bargaining table."

Prime Minister Justin Trudeau's Liberals campaigned on a promise to end muzzling, and they introduced new policies after the 2015 election to deliver on their pledge. This was followed by collective bargaining negotiations that led to the agreements signed in December, as well as other ongoing negotiations with separate units within the public service.

"We are pleased that our approach has produced tentative agreements that demonstrate our commitment to working with scientists and their bargaining agents on important issues, such as strengthening scientific integrity," said Jean-Luc Ferland, a spokesman for Treasury Board President Scott Brison.

"After 10 years of Conservative attacks on science, we committed to unmuzzle scientists and to restore the importance of science and evidence-based policy.... These tentative agreements are now in line with our government’s new communications policy, issued last May, which empowered subject-matter experts, including scientists, to speak publicly about their work without being designated."

March for Science to denounce Trump

Saturday's rally was part of a global protest to mark Earth Day and denounce what participants believe are anti-science policies promoted by U.S. President Donald Trump.

In Canada, Daviau noted that Canadian scientists got a lot of help and support from their U.S. colleagues during the period when former prime minister Stephen Harper's government was in power. Now, she said, Canadian scientists hope to return the favour to help their counterparts battle Trump.

Daviau also said that despite gains made in Canada, there is still room for improvement. She said one of the gaps is the introduction of new legal protections for whistleblowers. She said that many whistleblowers are treated like criminals when they should be praised as champions and heroes; her union and others advocate changes that would make it safer for public servants to blow the whistle on wrongdoing. "There are just incredible stories of their whole lives being torn apart because they did what they knew in their hearts was right," she said.

The following is an edited transcript of National Observer's interview with Daviau during the "March for Science" rally.

What can Canadian scientists or unions do to help Americans?

We can share our experiences with them — our lessons learned, what worked, what doesn't work, where they can focus their efforts. We’re actually ready to stand side by side, shoulder to shoulder with them, fight the fights like today’s (March for Science) rally. We’re here to stand up for science in the United States because science knows no borders. It’s international. It requires kinds of collaboration amongst peers all around the world and when you take out a major player like the United States, it can’t help but have a negative impact on science everywhere.

So does it go beyond providing moral support? Can you give some examples?

We’re working with our U.S. counterparts. This hit them hard and fast, so they were less than completely organized. We’re helping them to get organized. We’re teaching them how to run the kinds of campaigns that we ran and at the end of the day, as I said, we’re just going to be standing shoulder to shoulder with them, actually fighting the good fight with them.

And you were mentioning that they had helped you in the past.

Yes. It was led by the Union of Concerned Scientists, based in the U.S., but (there was a petition) signed by 800 international scientists. They had petitioned the Canadian government for some of the benefits we have been able to achieve. They really put a spotlight worldwide on what was going on with science in Canada and we couldn't be more thankful. It’s really important that you have allies in a fight like this and we’re ready to give back and be allies to our counterparts.

Is your collective agreement signed?

It’s not signed yet. It was ratified by our members. We’re just trying to get a signing date. It looks like it will be signed by mid-May and then we’ll be in a position to start implementing those important policies. But the muzzles are already off and this was just an assurance that no government could ever do this to us again without having to fight us at the bargaining table.

Yes, for sure. Today, there’s not nearly enough protection. We did testify to the (parliamentary) committee (reviewing the issue). We believe strongly that we need new legislation: legislation that reasonably has more people involved in the oversight. We want to make sure there are protections in place for whistleblowers — more assistance with legal advice, for example. There’s not nearly enough support for them and they really put their neck out. They put their careers on the line and we’d like it to be just less risky for people to report wrongdoing in the public service.

Whistleblowers are treated like criminals (in the government) and I think Canadians would expect exactly the opposite: that they would be champions; that these people would be heroes to the Canadian public because they do put themselves at risk to blow the whistle. There’s a lot of work to be done on the legislation and in terms of the powers of the office of the integrity commissioner, if we’re going to ensure that people feel safe to blow the whistle. As it stands now, it’s not safe. It’s 100 per cent unsafe and every single whistleblower has gone through 10 to 20 years of hardship as a result of standing up for what’s right for the Canadian people.

What do you think of the stories you’ve heard from whistleblowers?

There are just incredible stories of their whole lives being torn apart because they did what they knew in their hearts was right. As far as we’re concerned. When a public official is being questioned or investigated. We shouldn't treat those who blew the whistle like criminals. We should really assume that they’re telling the truth until that person can prove otherwise. People don't take it lightly when they blow the whistle. They do it because they believe Canadians are at risk.

Are you happy with the turnout at the March for Science today?

Yes, it's great. Our scientists got really active when they were under attack, with the Harper government. We’ve been able to resolve a lot of our concerns, although not all. But we’re making progress toward our issues and the fact that our scientists are still standing up today is really testament to how scientists support each other around the world and how they need each other across borders.

Great article, thanks! PIPSC has made a huge breakthrough in protecting scientific integrity. As stated, the largest PIPSC groups of scientists have come to tentative agreements that will be signed soon. Still to come are ensuring the same protections for scientists and researchers working for the federal agencies also represented by PIPSC, such as those with the National Research Council and the Canadian Food Inspection Agency. These groups are still in bargaining. By the end of the year, ALL federal scientists with PIPSC should be covered by scientific integrity clauses in their collective agreements. Cause for celebration for sure!

" We shouldn't treat those

" We shouldn't treat those who blew the whistle like criminals. We should really assume that they’re telling the truth until that person can prove otherwise. "
I agree with the first sentence but not the second. We should not assume someone is guilty just because someone else says they are, even if they have some evidence. A person should not have to prove innocence - something that may not be possible.