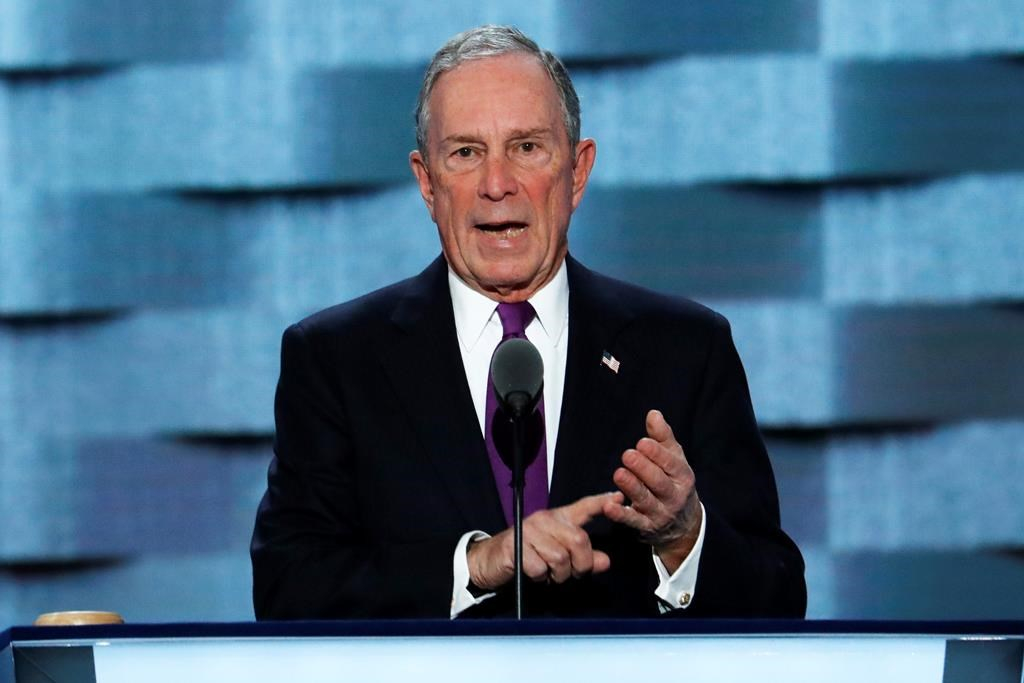 Bloomberg, who considered a presidential bid after serving three terms as New York City's mayor, addressed his intensifying focus on climate change in an interview with The Associated Press. He said there was no political motive tied to last week's release of his new book, "Climate of Hope: How Cities, Businesses, and Citizens Can Save the Planet," co-authored by Sierra Club executive director Carl Pope.

"I'm not running for office," the 75-year-old Bloomberg said.

Instead of helping to re-ignite his political career, he said the new book offered a specific policy objective: To help save an international agreement, negotiated in Paris, to reduce global carbon emissions.

The Trump administration is debating whether to abandon the pact as the president promised during his campaign. Under the agreement, the U.S. pledged that by 2025 it would reduce its annual greenhouse gas emissions by 26 to 28 per cent below 2005 levels, which would be a reduction of about 1.6 billion tons.

Bloomberg said he believed the U.S. would hit that goal regardless of what Trump does because of leadership at the state level and market forces already at play in the private sector.

"Washington won't determine the fate of our ability to meet our Paris commitment," he said in an email Saturday to the AP. "And what a tragedy it would be if the failure to understand that led to an unraveling of the agreement. We hope this book will help to correct that wrong impression — and help save the Paris deal."

Bloomberg already plays a significant role in shaping some of the nation's fiercest policy debates, having invested millions of dollars in one advocacy group that pushes for stronger gun control and another that promotes liberal immigration policies. In the new book, which follows what a spokeswoman described as $80 million in donations to the Sierra Club in recent years, the New York businessman solidifies his status as a prominent climate change advocate as well.

His policy repertoire aligns him with core values of the Democratic Party, although the Democrat-turned-Republican-turned independent has no formal political affiliation.

In the interview, Bloomberg shrugged off conservatives who condemn him as a paternalistic New York elitist. He noted that policies he helped initiate in New York City — including a smoking ban and high taxes on sugary drinks — have eventually caught on elsewhere.

"My goal has been to save and improve lives," he said. "Some ways of doing that can be controversial at first, but end up being highly popular and successful."

In his new focus on climate change, Bloomberg directs particularly aggressive language at the coal industry.

"I don't have much sympathy for industries whose products leave behind a trail of diseased and dead bodies," he wrote in the book. He added: "But for everyone's sake, we should aim to put them out of business..."

Similar language haunted Hillary Clinton's presidential bid last year and fueled criticism from Trump and other top Republicans that Democrats were engaged in a "war on coal."

Bloomberg offered a pragmatic approach when asked about the political consequences for politicians who embrace such a stance.

"The fact is, coal in Appalachia is running out," he said, adding that "Washington can't put generations of people back to work in a dying industry."

Saying that coal miners "have paid a terrible price," Bloomberg also disclosed for the first time plans to donate $3 million to organizations that help unemployed miners and their communities find new economic opportunities. Bloomberg Philanthropies highlights the plight of coal miners in a new film to be featured at the Tribeca Film Festival on Wednesday.

He avoided condemning the Trump administration directly, however, largely casting the new president's steps on climate change as irrelevant. The White House declined to comment when asked about Bloomberg's statements.

"As it turns out, Trump's election makes the book's message — that the most important solutions lie outside of Washington — even more important and urgent," Bloomberg said.

Perhaps he would consider

Perhaps he would consider applying a bit of pressure on our 'hypocritical' PM whose performance as a Climate hero in Paris is entirely contradicted by his actions on Pipeline approval and his stated intention to un-earth billions of barrels of Tar Sands Bitumen into our shared atmosphere.

And you actually think that

And you actually think that the Opposition would pass a resolution from the Liberals to do as you think should be done? Not in Canada, for sure. Our Federal Opposition would do anything and everything to sabotage any plans suggested by the Liberal Party no matter the subject. Witness their response to the Liberals desire for electoral reform! It had to be abandoned with no consensus forthcoming.