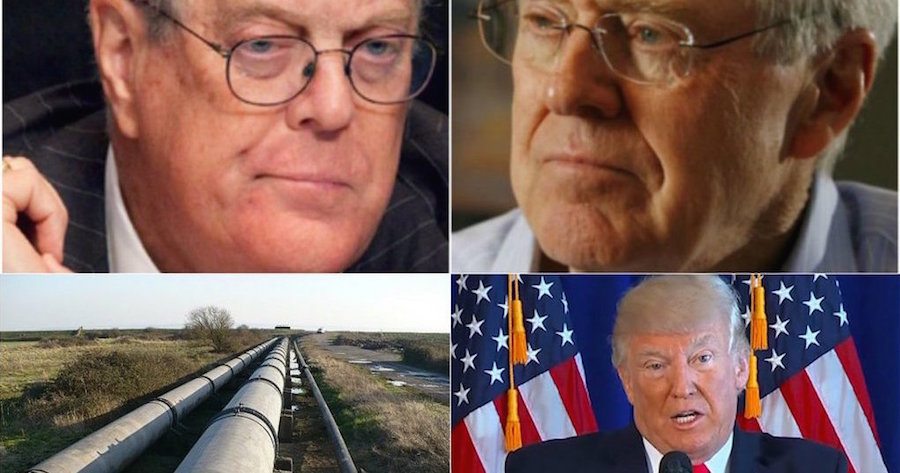 On Monday, Nebraska regulators narrowly approved passage of TransCanada’s Keystone XL pipeline. Although it didn't quite give the Calgary-based energy giant the route it wanted, the state still removed a major regulatory obstacle to the $10-billion project.

Capitol Hill is a mess, the international scene is a disaster, but one sector is winning bigly, fossil fuels. Even back in August 2017, as U.S. President Donald Trump raged over Congress's failure to kill Obamacare, oil billionaires Charles and David Koch, must have been popping champagne. Obamacare may not have been killed, but Trump was scything down the Environmental Protection Agency and environmental regulations. Trump's energy agenda was, in CNBC's words, "plowing ahead as other initiatives stall."

For most people, this may have gone under the radar, as the reality show president lobbed his stream of rants and raves on Twitter. The bullying tweets and manic political drama kept the public distracted, and messily papered over the sad, un-sexy stories about the dismantling of Obama's energy policy.

The regulations Trump loosened may have been ones that most people had never heard of, but they were critically important even if they couldn't garner page clicks and keep ratings going the way mass shootings, Alex Jones conspiracy theories, and the war of words between "rocket man" and the "dotard" did.

The Koch brothers' master plan to roll back American climate policy and environmental protection wasn't easy news to explain. The Kochs like to work quietly in the background and to fully grasp the ambitiousness of the billionaires' plan to gut regulations would require reading the entirety of Jane Mayer's riveting but long book, Dark Money.

And with two unstable rulers hovering their fingers so close over the button, who could focus more than a nanosecond on the death of rules that had prevented America from becoming a toxic sewer, or reduced corruption in U.S. energy deals? Who could focus on how Secretary of Energy Rick Perry was getting to know his Department of Energy by cutting back as many as 525 jobs at national labs? He'd once claimed (then retracted) that he intended to dismantle the energy department altogether.

Or that over at the EPA, Scott Pruitt was picking apart decades of hard-won regulations governing environmental protection?

From April to September, the Washington Post discovered through a leaked copy of his schedule that Pruitt had spent much of his time meeting with executives from the oil and gas industry. And as David Halperin wrote so aptly in the Huffington Post in October, Trump's policies have marked a "wholesale turnover of environment and energy policy to the fossil fuel and chemical industries, of which the Kochs are bedrock members."

For David and Charles Koch, President Trump — the Republican outlier they once hated so much they led a billionaire "resistance" against him— had turned out to be the vehicle for their longstanding dreams for deregulating business in the U.S.

Yes, the Kochs had sat on the sidelines, checkbooks closed, as Trump scandalized his way into the White House. Supporters of Marc Rubio in the primaries, they had called the choice between Trump and Hillary Clinton "like opting for cancer or a heart attack."

But even though they didn't apparently pay to play, the "cancer" delivered the brothers a basket of golden eggs. Trump's decision to pull out of the Paris global climate accord must have been a pure delight to the brothers who have financed so much climate denial over the last few decades. Still, they didn't like Trump the man.

That changed. When Trump found the brothers dining with a billionaire friend at Mar-a-Lago last August, the magnates 'made nice with' each other and the personal relationship warmed, Politico reported.

The Kochtopus is ready

Remember back in the days when so many of us were sitting stunned and depressed, still trying to figure out how to navigate this disorienting new post-Obama world?

While we were suffering through end-of-the-world fantasies, Trump was suffering from a talent shortage after the inauguration.

Cabinet chairs sat empty for an embarrassingly long time as one member after another of the Republican establishment ducked the call to public service.

But the Kochtopus was poised to fill the void, after decades of groundwork. “The vacuum in Trump not having his own network is filled by people who’ve been cultivated for years by the Koch network,” Richard L. Hasen, a professor at the UC Irvine law school and an expert in campaign finance, told the Los Angeles Times' Lisa Mascaro last April.

So, it's not really a coincidence that Trump's gutting of climate, energy and environmental policy looks like it came from a Koch brothers' retreat wish list. It did!

But the biggest golden egg Trump may deliver the Kochs is yet to come.

Last May, Charles Koch launched a multimillion-dollar campaign to drive Trump's tax plan through Congress. Koch's Freedom Partners Chamber of Commerce vowed to throw "the full weight of the network" behind the campaign with the goal of passing a tax overhaul this year, James Davis, a top official in Freedom Partners, told USA Today.

Advertising and mobilizing grassroots activists were the stated strategy, but certainly these sophisticated campaigns have been employing the notorious tools data mining and digital targeting that helped get Brexit passed and Trump elected.

So, while you and I have been worrying over the quality of civic discourse and our children's futures, Koch's army has been busy selling Americans on less taxation for corporations and America's one percent.

According to USA Today, this Koch network ranks "among the most influential players in conservative politics with operations in 36 states and its own grassroots arm and for-profit data and marketing branches. In all, about 550 ultra-wealthy donors help finance the constellation of political and nonprofit groups associated with Koch and his brother David Koch."

Davis said the groups would spend between $300 million and $400 million on policy and political campaigns ahead of the 2018 elections.

With last year's gains in the stock market, and tax cuts so close to their reach, the Koch brothers must feel that the wind is in their sails.

Thanks to Trump, America is vulnerable to the Koch brother's oil-igarchy as never before. Other parts of the world can be pulled into America's vortex.

The Kochs made news again last week after putting $550 million on the line to purchase Time, Inc, the company that publishes both Time and People magazines.

Soon they may own one of America's biggest media brands so they can deregulate America and spin the story of how good this is for the people.

And in case you think this is an American problem that doesn't affect Canada, the Kochtopus tentacles have been up north for years, ranking among the largest foreign oilsands lease holders in Alberta. They have been funders of the Fraser Institute think tank, and the author of Ethical Oil and founder of Rebel Media, Ezra Levant, worked at the Charles G. Koch Foundation. Canada's porous border with the U.S. seems a small impediment should they turn their sights on our regulatory system. Canadians, as a people, will have to turn their tentacles back.

Since you're still with me...

National Observer's readership is growing but we can't depend on advertising to pay for our journalism. Internet giants are sucking up nearly all of Canada's digital advertising dollars. So you can see why I need to ask for your help. National Observer's journalism takes a lot of time, money and energy to produce. We've put up a paywall, because this is the only way we can continue to do the reporting and analysis our readers love. I spent the weekend working on the piece you just finished, because during the week, I must focus on bringing in money to support our operations. I do this because I believe our journalism has been having a big impact on Canadian policy, conversation and communities. If everyone who likes National Observer would support it by taking out a subscription, National Observer could become completely reader-funded and sustainable. For only ninety-nine cents you can try out a month of National Observer. If you like it, your subscription will automatically renew at our regular rate of $12.99 monthly.

Last week, I hosted an event in Vancouver with Steve Katz, publisher of Mother Jones magazine.

In my interview with Katz, I asked him what has changed with Mother Jones's reporting since Trump's election.

"This is an administration and a man himself who thrives on the social pathology of chaos and the rest of us are sucked into his personal trauma and that is used to de-center those of us who are in opposition and make the kinds of changes we want to make. It certainly affects journalists," Katz said.

Katz went on to talk about the galvanizing impact of Trump on the Mother Jones team. "We were able to shift quickly into action to report on what we knew were going to be the most critical issues of the day going forward. We know why we're here. We know what we're supposed to do. And we understand the damage that is being done to our collective psyches form this chaos-based method of government and we needed to find strength to go forward."

"The National Observer and Mother Jones have a lot in common. The business model is a lot alike. And it makes it possible through reader support to stick with a story and go deep on it."

Please help out with a subscription today. We're fired up and ready to go.

Editor's note: This article was updated at 8:15 am on Nov. 21, 2017 to add details about the approval of Keystone XL's route by Nebraska.

Thank you Linda. You have

Thank you Linda. You have been so kind and generous to me, giving me a subscription to National Observer while my income was below the poverty line. My fortunes have recently improved and I have found "full-time" employment. So I shall subscribe to National Observer as a proud member of the world's finest journalism, as witnessed by your brilliant analysis of our future with the Kochtopus'. Thanks Linda, you help me understand earth's dilemma.

Thank you for subscribing now

Thank you for subscribing now that you can, Geoff. I'm so glad the reporting you've been following on National Observer has been meaningful to you.