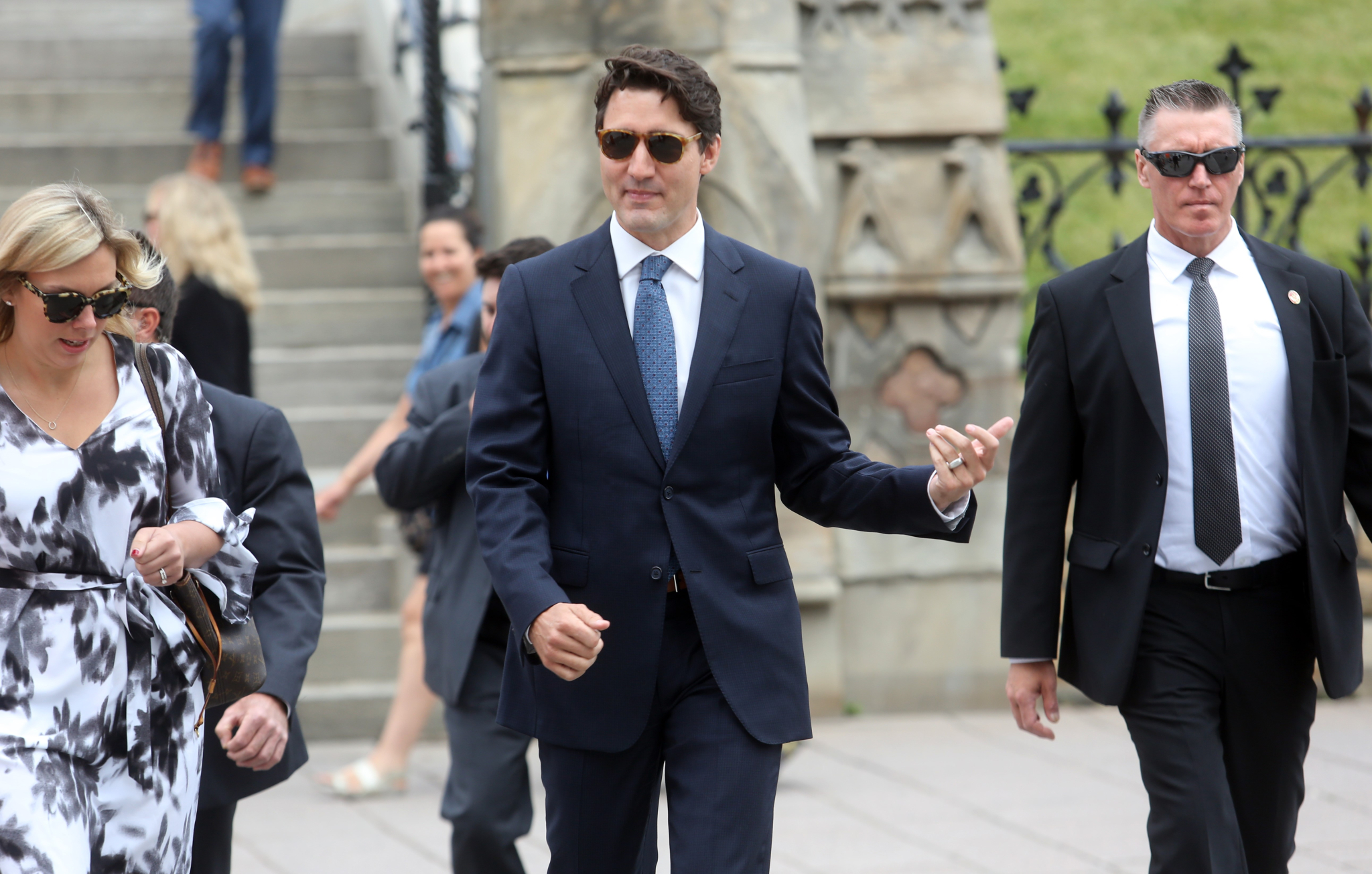 Prime Minister Justin Trudeau arrives with staffers and security detail at the National Press Theatre in Ottawa on June 27, 2017 where he conducted an end-of-sitting press conference with reporters. Photo by Andrew Meade
Previous story
Next story

At a Tuesday press conference in Ottawa, Trudeau said he had “impressed upon” German Chancellor Angela Merkel how important it was that they “stood together” with the U.S. and other G20 members in an international statement—despite Trump’s rejection of the Paris Agreement that aims to cut heat-trapping carbon pollution.

The comments add context to a June 9 Der Spiegel story which said Trudeau suggested to Merkel she could remove all references to the Paris pact from a planned G20 statement in order to entice Trump to sign on, a situation the magazine referred to as "appeasement."

The story led to vociferous denials by the prime minister in Parliament and a demand for a correction from his office. Twice, Trudeau stood in the House of Commons this month to answer questions on the issue.

“No, I did not say that,” he said June 12; “I did no such thing,” he added two days later. His spokesperson, Cameron Ahmad, has also called the article’s "characterization” incorrect.

The magazine, however, is standing by its story, and no correction has been added to date.

Asked by National Observer at the Tuesday press conference what he had told Merkel, Trudeau indicated that he was focused on unity.

“I told her what, it turned out, President Trump had also said in public: that he was still interested in looking forward on clean energy, on environmental issues, but not within Paris,” said Trudeau. “And I impressed upon her the importance of making sure that we all stood together, including in the [G20] communiqué moving forward.”

The question of whether the prime minister is truly standing up for the Paris Agreement in international talks comes at a crucial time, as G20 leaders gear up for what could be a combative summit in Hamburg, Germany next month.

The Paris Agreement, signed in 2015, aims to limit global warming to two degrees this century by cutting the pollution that contributes to dangerous and destructive climate change.

Nearly 150 countries, including Canada, have ratified the deal, but Trump, who announced the U.S. would withdraw from the agreement, is known to have expressed doubts about climate change. The U.S. can't technically start its withdrawal process until 2019.

On Tuesday, Trump's energy secretary said he has not spoken to the president about whether he believes climate change is real. That same day, Trump administration's environmental agency also moved to withdraw an Obama-era rule that protected U.S. streams from pollution.

In Ottawa, Trudeau insisted that Canada continues to stand with the international community on the Paris Agreement: “We truly believe that moving forward we have to stand strong,” he told reporters.

Outside the G20 summit in Hamburg, Trudeau will be championing gender equality at a Global Citizen music festival.

Later on Tuesday, Trudeau announced he was appointing a new "ambassador for climate change," Jennifer MacIntyre.

A diplomat who has served in Washington, D.C. and has worked on the Europe portfolio, MacIntyre is the fifth person to hold the title and the first since the Harper government in January 2015, according to The Canadian Press.

But she is also the first to not be given the equivalent role of chief climate treaty negotiator, CP reported, whereas previous climate ambassadors had also been Canada's chief negotiators on climate change treaties.

I am proud to introduce you to Canada's new Ambassador for Climate Change: @JMacCanada. So proud to have you on the team! pic.twitter.com/JL6yXs1pOt

"Ms. MacIntyre has a lot of diplomacy experience and has spent a lot of time thinking about international trade," said Catherine Abreu, executive director of Climate Action Network Canada, in remarks to National Observer.

"That makes her a good candidate to work on bilateral or multilateral relationship-building with a focus on opportunities for trade and investment that climate change policies can bring."

While Abreu said MacIntyre has arguably less experience on international climate negotiations or policy development, she said she was hoping she would rise to the challenge.

By Carl Meyer | News, Energy, Politics | June 19th 2017
Reports from the Race to a Safer World

By Carl Meyer | News, Energy, Politics | June 12th 2017
Reports from the Race to a Safer World

Trudeau is waffling -- again -- and this makes me far less likely to vote for him in future. Focusing on "unity" is politician-speak for supporting the opposite side (and thus breaking a campaign promise).