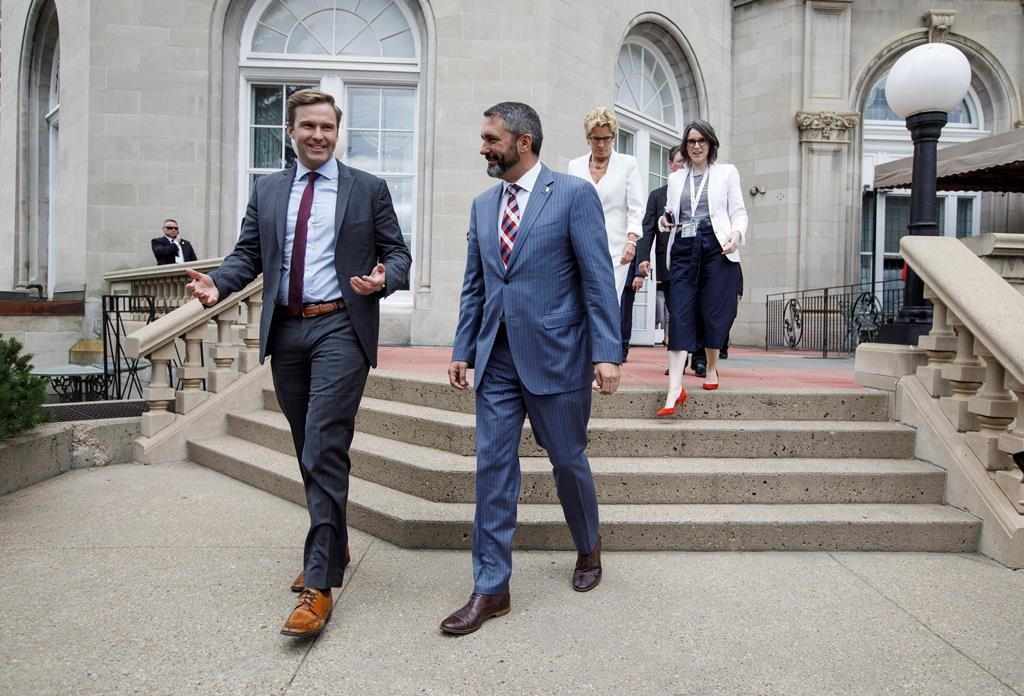 New Brunswick Premier Brian Gallant and Yukon Premier Sandy Silver walk together on the way to a group photo for premiers during the Council of Federation meetings in Edmonton on Tues. July 18, 2017. Photo by The Canadian Press/Jason Franson
Previous story

New Brunswick Premier Brian Gallant is stopping short of calling on his provincial counterparts to offer abortion pills for free, but he says it's "the right thing to do."

After years of restricting access to abortion services, New Brunswick became the first province to provide universal coverage of the abortion pill Mifegymiso earlier this month.

"We believe access to essential medical services shouldn't depend on a person's postal code or income bracket," Gallant said in an interview Tuesday before he addressed a so-called "shadow event" of the Council of the Federation, a meeting of provincial and territorial leaders in Edmonton about abortion access in Canada.

"Not every region has the same type of access," he said. "Mifegymiso is an opportunity to help with geographical access."

Gallant said his government has been working hard over the last two and a half years to advance women's equality and reproductive health care.

"We've pulled New Brunswick into the 21st century by getting rid of the two-doctor rule and other barriers to reproductive health, but there is still more to do," he said. "It's all about advancing women's equality, not only because it's the right thing to do, but because studies show that it helps strengthen your economy and advance important issues like education and health care."

The two-step abortion pills come at a cost of about $300 to $450. While New Brunswick is the only province that currently funds the pills, Alberta, Quebec and Ontario have also indicated they will make medical abortions available to women free of charge.

Gallant was set to give opening remarks at the event entitled "Abortion Access in Canada: The Politics of Mifegymiso." The event included a panel with Alberta Health Minister Sarah Hoffman and a discussion about removing existing barriers to medical abortion in Canada.

Sandeep Prasad, an event organizer and executive director of Action Canada for Sexual Health and Rights, said reproductive health advocates attended the meetings in Edmonton to discuss the need to ensure universal cost coverage of the abortion pills.

He said he had "promising" conversations with Nova Scotia Premier Stephen McNeil and P.E.I. Premier Wade MacLauchlan. Surgical abortions became available in Prince Edward Island earlier this year after more than 30 decades of not offering those services.

"We want the provinces to commit to universal cost coverage of Mifegymiso ... before the ministers of health meeting in November," Prasad said.

He warned that if provinces refuse to cover the cost of medical abortions, it could lead to a two-tiered health-care system where only women who can afford the costly pills will have access to a medical abortion.

Only one is six hospitals offers surgical abortions, Prasad said, noting that those are often in large urban centres.

Mifegymiso has been slow to roll out in Canada, in part because Health Canada has been "changing the goal posts," Prasad said. Although initially physicians were required to take mandatory training, he said that is now optional.

The abortion pill has been available elsewhere for nearly 30 years and is approved for use in more than 60 countries with varying restrictions.

It is a combination of two drugs taken on separate days. Mifepristone is taken first to block the hormone progesterone, which helps prepare the lining of the uterus for pregnancy. This causes the lining to break down and shed. Then it's followed 24 to 48 hours later by misoprostol, which causes the uterus to contract and expel the pregnancy.

The article could have

The article could have indicated this is still a "medical service", not a "pill". You don't keep these on the shelf with the Asprin. They have to be administered by a physician and your condition monitored through the procedure, so this is about free doctor services, not just a pill.