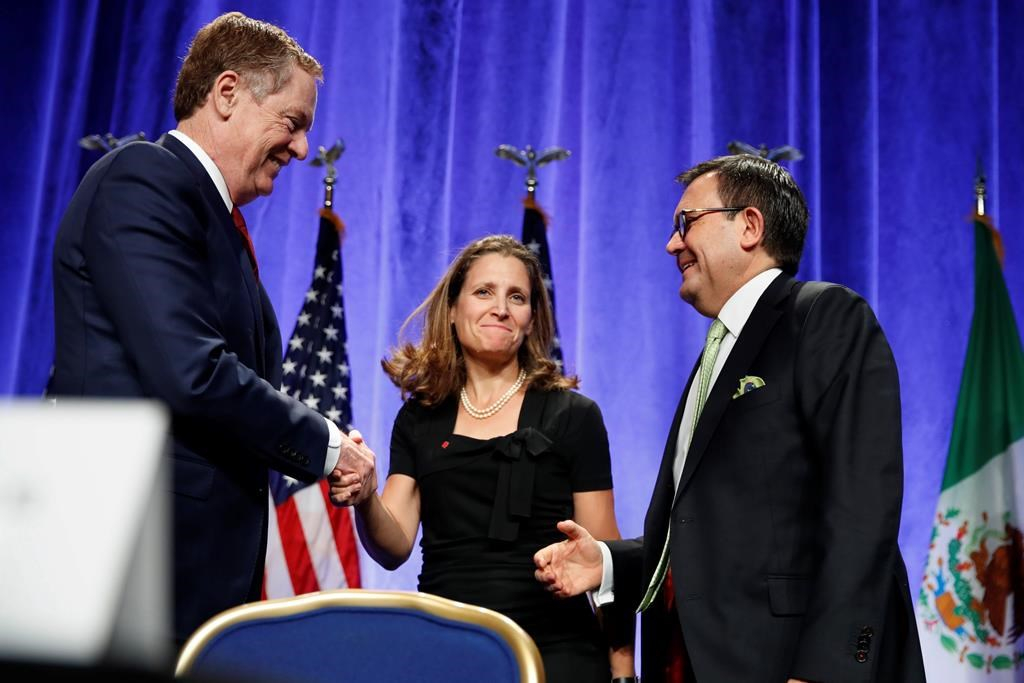 Robert Lighthizer, left, shakes hands with Chrystia Freeland, accompanied by Ildefonso Guajardo Villarreal, after they spoke at a news conference, on Aug. 16, 2017, at the start of NAFTA renegotiations in Washington. Photo by The Associated Press
Previous story

NAFTA negotiations are underway — and the United States says it wants major changes to the agreement, not mere tweaks.

U.S. trade czar Robert Lighthizer welcomed his Canadian and Mexican counterparts to Washington, D.C., on Wednesday for what he called a momentous occasion.`

''This is an historic day for the United States,'' Lighthizer said. ''American politicians have been promising to renegotiate NAFTA for years. But today President Trump is going to fulfil those promises.''

Lighthizer said he shares Donald Trump's views on trade — and that the U.S. wants substantial changes to the deal. A few months ago, the president said he was pleased with Canadian trade, and only wanted a few tweaks.

"I want to be clear: He is not interested in a mere tweaking of a few provisions, and a couple of updated chapters," Lighthizer said.

"We feel that NAFTA has fundamentally failed many, many Americans and needs major improvement."

That includes changes to the rules for importing auto parts, higher labour standards and a new dispute-settlement process that respects the sovereignty of individual countries. The dispute settlement question has been a historic irritant with Canada.

It was the final issue resolved on the final night of negotiations in the 1987 agreement, and even caused Canada to withdraw from the talks at one point. At issue is whether international panels should have power to settle cross-border disputes between companies.

Canada has been resistant to allowing American courts to decide such cases — it has, in fact, successfully used the dispute-settlement body in Chapter 19 in the softwood lumber fight, for instance.

It's true that NAFTA has benefited many, in particular those in the farm sector, Lighthizer said.

"But for countless Americans, this agreement has failed," he continued. "We cannot ignore the huge trade deficits; the lost manufacturing jobs; the businesses that have closed or moved."

She said she wants that spirit of mutual benefit to guide the talks.

Such spirit also rang through in the remarks of Mexico's lead minister, Ildefonso Guajardo. He said the talks should seek to produce a "win-win-win" for all three countries, a notion recently expressed by U.S. Vice-President Mike Pence.

He said NAFTA was more than a trade deal — but pushed the countries closer together, and made them think of themselves as a region. He said these talks will not reverse that.

''The process we begin today is not about going back to the past. It is about looking to the future,'' Guajardo said. ''The issue is not about tearing apart what has worked.... For a deal to be successful, it has to work for all parties involved....

The new NAFTA should conform

The new NAFTA should conform to international law. Therefore it must include a clause allowing a member country to impose carbon tax on items imported from a country not in compliance with the Paris Accords.