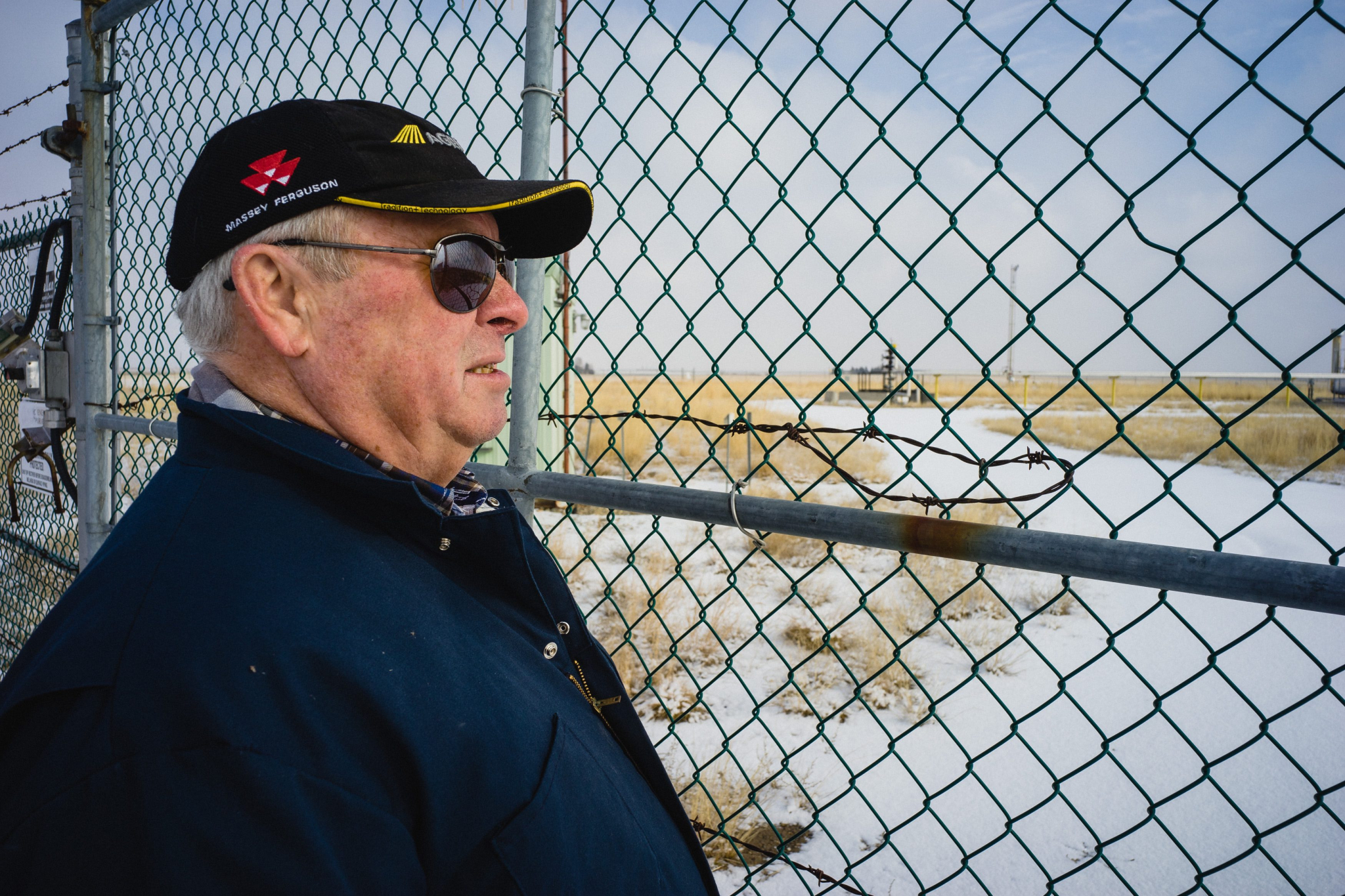 Land owner Gary Smith looks at one of the sites operated by Lexin on his property in a small town south of Calgary on Feb. 24, 2017. File photo by Louie Villanueva
Previous story
Next story

Sulphur waste from the catalyst used to sweeten sour gas lay spilled on the floor at Lexin Resource Limited’s natural gas plant southeast of Calgary throughout 2015.

Careless disposal of such waste can result in severe soil acidification and groundwater contamination.

Despite generating tens of millions in annual revenue that year, Lexin left the spill uncleaned, stopped paying royalties to at least 17 freeholders and stopped making lease payments to Albertans who had Lexin wells and pipelines on their property.

In February 2016, an Alberta Energy Regulator (AER) inspector noted the spilled catalyst had not yet been cleaned up. A month later, Lexin stopped reporting its oil and gas production to regulators and stopped sending millions of dollars in royalties to the provinces.

"If true, I regard this matter as very high risk, given that the Mazeppa plant and gathering system collects and processes sour gas... and is close to highly-populated areas, including the City of Calgary,” he wrote in May, 2016, to the AER.

The AER eventually ordered Lexin to remove the spilled catalyst by the end of June.

Instead, Lexin laid off all but six staff, informed the regulator that the sour gas leak monitoring system at the plant was no longer working and warned "that if there was an incident or emergency at any of its facilities, the regulator should handle it because the company cannot respond."

'Not a safe way to run anything'

“We were basically security guards, but we were only one man per shift,” one of the few remaining employees was quoted as saying in a CBC News report. “That is not a safe way to run anything.” Unpaid water bills meant the plant no longer had potable water.

And the spilled spent catalyst remained on the gas plant floor.

What followed was more than six months of reckless disregard for public safety and the public interest that would scarcely seem plausible as a sinister movie plot.

Unfortunately, this was not an overzealous film script. Without dramatic changes to the province’s energy policy, the Lexin saga is Alberta’s future.

The events provide a glimpse into the emerging crisis of unfunded oilfield liabilities in Alberta and a stark illustration of what two eminent economists have called, the “economic underworld of bankruptcy for profit."

At the root of the oilpatch strategy of bankruptcy for profit in Alberta is the energy regulator’s fictional accounting of ‘assets’ and ‘liabilities’ used to supposedly manage the province’s aging oil and gas infrastructure. The ‘assets’ counted by the captured regulator do not actually exist and will never be available to cover the ‘liabilities,’ which themselves are profound underestimates of the cost of reclamation.

As George Akerlof (Nobel Memorial Prize in Economic Sciences, 2001) and Paul Romer (World Bank president) warned just as Alberta began setting the policies that led to this crisis in the early 1990s: “If regulations make use of accounting values that differ from true economic or market values, this creates opportunities for abusive behavior that can be consistent with the letter of the law.”

Alarm bells should have gone off

By 2014, Lexin was already responsible for more $140 million in environmental liabilities, even by the AER’s profound undercounting. When Lexin stopped making lease and royalty payments to Albertans the following year, alarm bells should have gone off at the regulator.

Within months of that, when Lexin stopped paying royalties, laid off almost all employees, and began funneling its natural gas revenues to an Austrian bank, the regulator should have grasped the obvious.

“We’re appalled that the company could do what they’ve done and get away with it,” one former Lexin employer later said in a Calgary Herald report.

Instead of a shutdown by regulators, Lexin continued to loot millions worth of Alberta resources and defied regulatory orders for the better part of a year, putting residents at significant risk from its poorly maintained and monitored sour gas infrastructure close to Calgary.

After the AER finally stepped in with closure orders at the last minute in February 2017, the Canadian Association of Petroleum Producers vice president and Orphan Well Association chair, Brad Herald, viewed Lexin "as an example of the AER carefully following its rules and regulations. “They have to follow due process,” he said. “The AER stepped in when it felt it was appropriate.”’

Three weeks later, Lexin’s 1-800 number to report emergency incidents was about to be disconnected for lack of payment, pond levels at the gas plant were dangerously high, and Lexin said it was unable to deal with “significant health, safety and environmental concerns or to otherwise maintain care or custody of any of its sites.”

The spent sulphur catalyst remained on the gas plant floor.

Decades of captured regulators have allowed hundreds of billions in unfunded environmental liabilities to accumulate in Alberta. In the meantime, Alberta’s conventional crude oil and natural gas industries have matured and are now in terminal decline: hundreds of companies are currently insolvent and have been for some time, unable to ever pay to reclaim the mess they’ve profited from.

Lexin set a dangerous example of just what one can get away with in Alberta’s oilpatch. But it doesn’t have to be Alberta’s future.

The time for change was yesterday. There is a bold plan to clean up the mess and make the polluter pay. Learn more and get involved to reclaim Alberta’s future today.

The Alberta Government must

The Alberta Government must step up to the plate and make the changes to regulation of this industry that were promised during their election campaign. Realistic royalty levels and splitting the energy regulator into regulation and monitoring functions would have helped. Now action is absolutely necessary.

Let's all send this report on

Let's all send this report on to Lorne Gunter of the Sun. I'm sure he'd like to get right on decrying the obscene waste of provincial resources, and flagrant disregard for public safety.

Take heed, all greed!
No accountability to provincial and federal regulators.
No protection to workers, the environment and landowners.
What we've come to know, receive and expect from all pipeline companies.