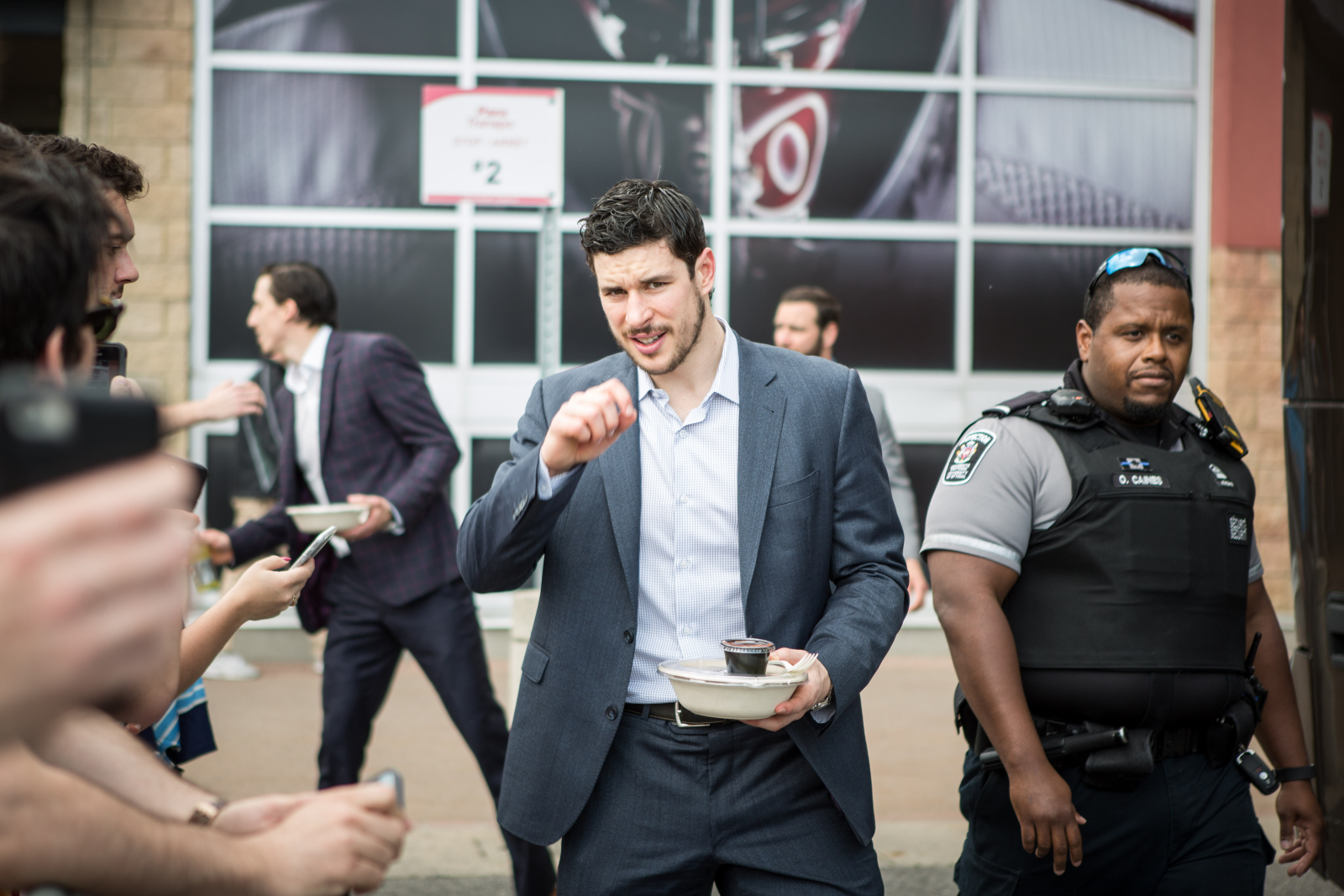 Sidney Crosby leaves a Pittsburgh Penguins practice in Ottawa during the Stanley Cup conference finals on May 18, 2017. File photo by Alex Tétreault
Previous story
Next story

Former NHL player Georges Laraque says it is embarrassing that the Pittsburgh Penguins are willing to visit the White House.

The retired enforcer said Monday that hockey showed its conservative face while National Football League and National Basketball Association players and teams battled President Donald Trump over the weekend on the issue of kneeling during the U.S. national anthem to protest racism and police brutality.

The Penguins issued a statement Sunday saying they would honour the "tradition" of championship-winning teams visiting the White House even though Trump had just dis-invited the NBA's Golden State Warriors after scoring star Steph Curry said he didn't want to go. That prompted NBA star LeBron James to call Trump a "bum."

"I know hockey's more conservative than other sports, but this time it's just wrong," said Laraque, who was a black player in the predominantly white NHL. "I'm surprised the NHL didn't make a stand.

"To me, it's an embarrassment that they're going."

He said the Penguins' decision looked especially bad when the NFL's Pittsburgh Steelers waited in a tunnel during the anthem before going onto the field for their game on Sunday.

"When they go there, it's not going to look good," said Laraque, who hosts an afternoon sports show on Montreal radio and was a former deputy leader of the Green Party of Canada. "They'll get demolished.

"This is the last place the Stanley Cup should be."

"Everyone's got the right to go or not to go," Crosby said Sunday. "But we've been invited and we accepted the invitation. I don't think you have to read into it any more than that."

Trump seemed to be at war with the sports world as he tweeted that NFL players should be "fired" if they protested during the anthem and for fans to walk out if they saw it.

Several players responded by dropping to a knee during NFL games on the weekend.

Trump and his supporters feel the protests show disrespect to the American anthem, the flag and the armed forces.

Auston Matthews, the Toronto Maple Leafs 20-year-old American star from Arizona, said it is disrespectful to publicly protest during pre-game renditions of "The Star-Spangled Banner."

"I don't think I'd be one of the people who would take part in that," he said, adding that he understands the athletes using a platform to "send a message."

During the World Cup of Hockey in September, 2016, U.S. coach John Tortorella said he would bench any player who refused to stand during the anthem. At the time, debate was raging over NFL quarterback Colin Kaepernick sitting out the anthem to protest racism against African-Americans.

Many believe Kaepernick has since been ostracized as he was not signed by any NFL team. Laraque said it was tougher for Kaepernick because he was alone in his protest, while the roughly 200 players who protested Sunday are not taking as big a risk.

"It's different when you might lose your job," he said.

The issue at least has players talking about a political issue, which is rare in hockey. However, after the Boston Bruins won the Stanley Cup in 2011, goalie Tim Thomas refused to accompany his teammates to visit then-President Barack Obama.

The protests were a hot topic among the Winnipeg Jets, who have several American players including captain Blake Wheeler of Plymouth, Minn., who tweeted on Sunday: "Regardless of how it makes you feel individually, these are literally the principles the US was founded on. Come on, Mr. President."

At practice Monday, Wheeler said he and his wife had been in a "slow boil" over the anthem debate and that it "felt right to kind of take a stance."

When asked about the Penguins' decision, he said: "They're the champs. They can do as they feel. You win the whole thing, that's your decision. You have to respect their ability to choose."

Jets forward Matt Hendricks of Blaine, Minn., said protesting inequality is not a sign of disloyalty to ones country.

"It wasn't about the flag," he said. "Us as human beings need to understand that.

"It's not (about) not supporting the United States or the armed forces or the military. It has nothing to do with that. That's not why they're taking a knee."

Neither player would object if a teammate decided to sit or kneel. Same goes for coach Paul Maurice, who is Canadian.

"The simple rule in our locker-room is the players can say whatever they want," said Maurice. "If you want to take a stand and make a point, you should feel free."

Isn't it time to either stop

Isn't it time to either stop playing anthems--which were introduced at sporting events to increase patriotism and support for the military--or leave the teams in the locker rooms until the anthem is over. And Crosby is just wrong on this. Attending this event is far more than just "tradition" it would legitimize this openly racist, misogynist, xenophobic , war monger who is threatening billions around the world. Lebron James was right when he said it's no longer an honour.