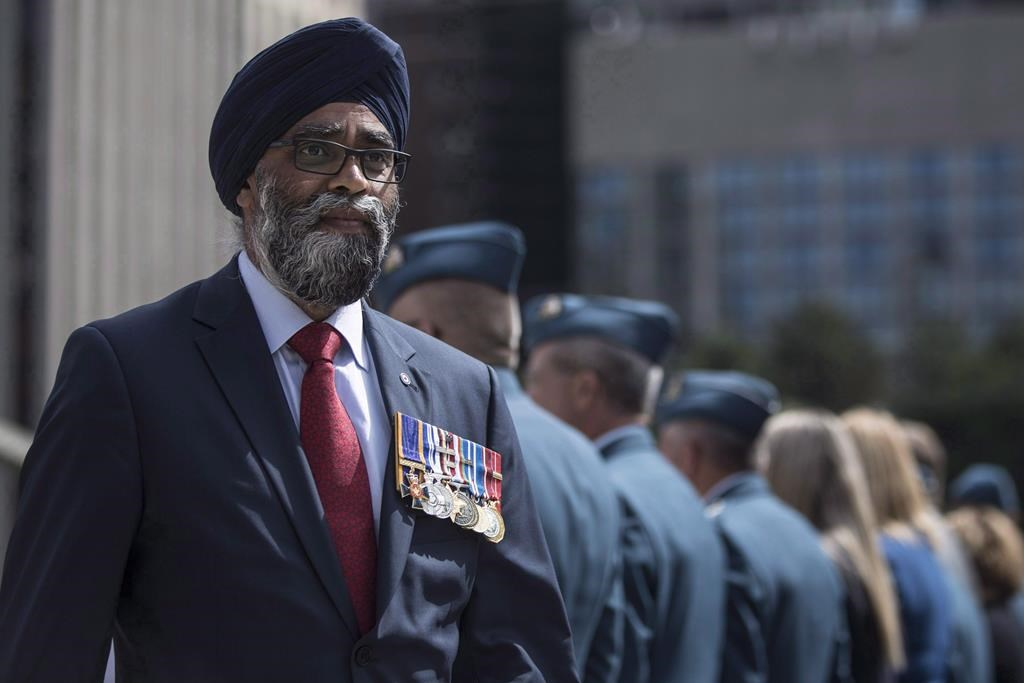 Defence Minister Harjit Sajjan displays his service medals as he leaves a ceremony in which the Royal Canadian Air Force were presented with new ceremonial flags in Toronto on Friday, September 1, 2017. File photo by The Canadian Press/Chris Young
Previous story
Next story

The Trudeau government is taking its time deciding how to protect Canada from ballistic missiles as part of a larger review of North American defences, Defence Minister Harjit Sajjan revealed this week.

"When we look at what BMD (ballistic missile defence) is, what the threats are, we need to actually spend more time to making sure that we do get this right," Sajjan said Wednesday outside the House of Commons.

The comments are the first confirmation that the Liberals have not ruled out asking the U.S. to participate in its continental missile shield, which Canada famously opted not to join after a national debate in 2005.

Sajjan insisted Canada's official position has not changed, and that ballistic missiles are only one threat being considered as the government prepares to talk to the U.S. about upgrading North American defences.

"What I don't want is people to get fixated on one thing," he said. "When we look at North American defence, there are other threats out there that we need to make sure we have a proper system in place."

But he said the threat to Canada from ballistic missiles "is real," and that they will be on the agenda when Canadian and U.S. officials meet to talk about upgrading the North American Aerospace Defence Command, known as Norad.

"We will monitor this threat and make sure that Canadian security is protected," Sajjan said.

Hours earlier, federal Conservatives called on the government to start immediate talks with the U.S. about joining its ballistic-missile — something the Tories themselves refused to do during their near-decade in power.

Conservative foreign affairs critic Erin O'Toole explained his party's change of heart by pointing to North Korea's recent sabre-rattling, as well as revelations last month that official U.S. policy is to not defend Canada from a ballistic missile attack.

"The last six months have been a game changer," O'Toole said. "Accordingly, we're urging the government to fill the one gap that exists in North American defence."

North Korea has conducted several provocative nuclear and ballistic missile tests in recent months and some fear Canada could be caught in the middle of a conflict between that country and the U.S.

Those fears grew after Norad deputy commander Lt.-Gen. Pierre St-Amand revealed to a parliamentary committee last month that the official U.S. position is not to intercede in a missile attack on Canada.

St-Amand acknowledged U.S. officials could ultimately intervene, but such a decision would be made "in the heat of the moment," meaning it was not guaranteed.

The U.S. actually invited Canada to join its continental missile-shield system more than a decade ago, but then-prime minister Paul Martin opted against it in 2005 following a divisive national debate.

Canada has been on the sidelines ever since as the U.S. spent more than $100 billion building a series of land- and sea-based interceptors to stop the type of limited attack North Korea might launch.

One of the big questions facing any discussion with the U.S. about missile defence will be how much Canada should contribute to the controversial program, whose actual effectiveness has been questioned.

But Sajjan said any costs would be part of upgrading Norad and the North Warning System radar network, which together allow Canada and the U.S. monitor North America's air and water approaches.

It is only a matter of time before North Korea can directly attack North America, former national security adviser Richard Fadden warned Wednesday at a conference hosted by the Canadian Global Affairs Institute.

"The discussion is academic whether they can do it today or tomorrow or next week, because they're going to be able to do it," said Fadden, who has advised both Harper and Prime Minister Justin Trudeau.

Fadden lamented the lack of political discourse over whether the government plans to address the threat.

"We can do a whole variety of things. But not talking about it, it seems to me, is unhelpful."

" ... as well as revelations last month that official U.S. policy is to not defend Canada from a ballistic missile attack."
Is this true? Would it not be a violation of its NATO commitment.