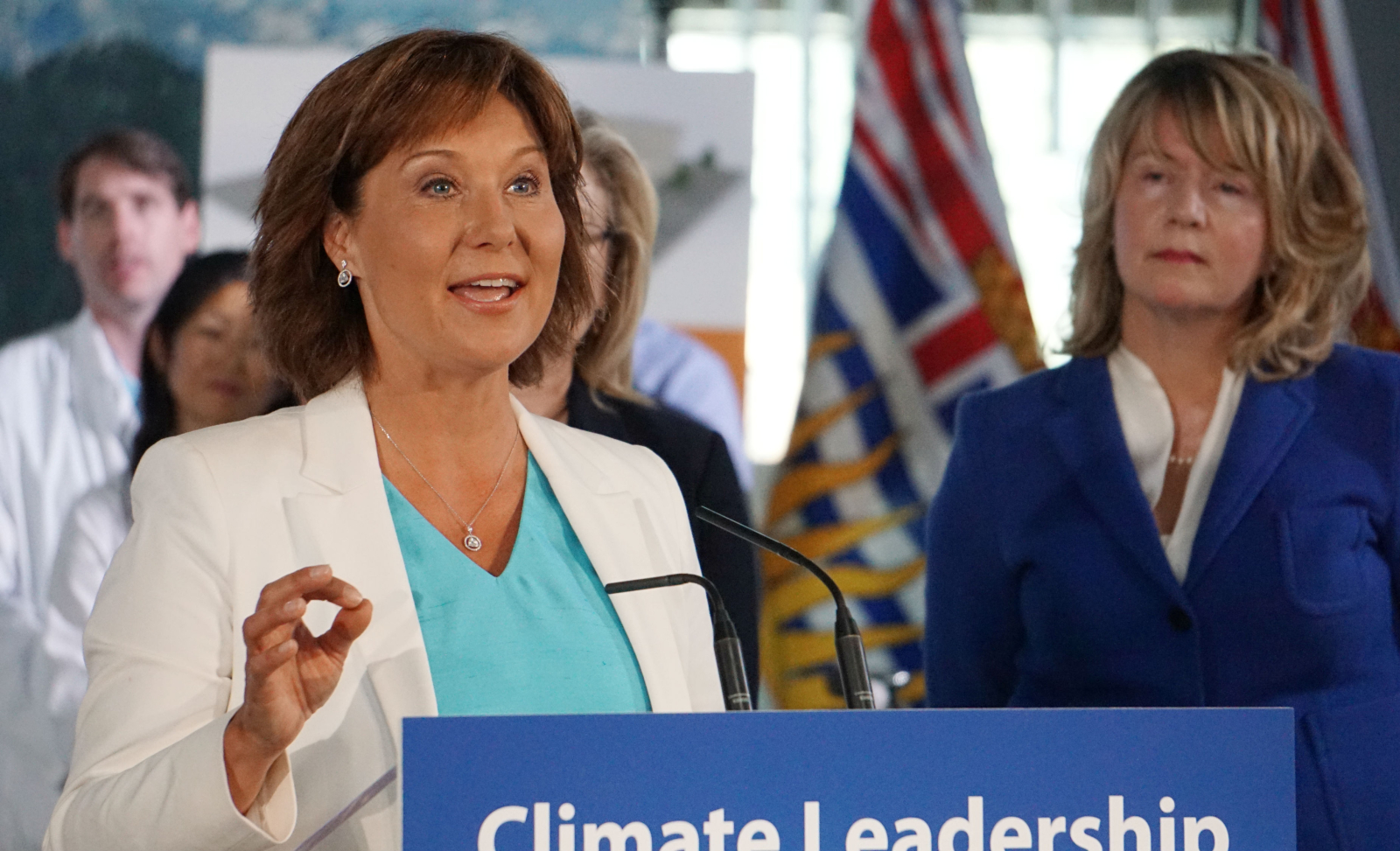 Environmentalists are roundly condemning a new Climate Leadership Plan for British Columbia which they describe as "full of holes," and not designed to reduce global warming pollution for at least a decade.

The new climate plan — overdue by at least two months — was presented to the public by Premier Christy Clark on Friday, and contains 21 actions for forestry, natural gas, transportation, agriculture, industry, buildings, and public sector leadership. Over the next 10 years, the government says the plan will generate 66,000 jobs, and reduce net greenhouse gas emissions by up to 25 million tonnes below current forecasts by 2050.

After reviewing the strategy however, environmental advocacy groups are questioning whether it will work. Merran Smith, executive director of Clean Energy Canada, said the province's leadership has "fizzled," and more than half of the emissions reductions counted in the plan may never materialize.

“With this plan, British Columbia’s carbon pollution will be the same in 2030 as it is today," she said in a press release. “Despite the smooth presentation, this plan is full of holes — the only actions British Columbians can count on are the few that come backed by regulations or dollars."

Tzeporah Berman, who was part of the Climate Leadership Team appointed to inform the new plan described the plan as "pathetic and cowardly" in the context of commitments from provinces like Alberta, Ontario, and Quebec, which are projecting greenhouse gas reductions of 20 to 25 per cent by 2030.

These critical reaction to Clark's announcement contrasts with the enthusiastic response last fall to Alberta's climate change plan, which had widespread support from both major environmental groups and leading oil industry executives.

No increase in carbon tax

British Columbia has a legislated target to reduce carbon emissions by 80 per cent below 2007 levels by 2050, and has already admitted that it will not meet its short-term goals for 2020. The province's climate pollution has been on the rise since the Clark government froze or weakened many of the policies put in place by her predecessor, including the repealing of critical cap and trade legislation.

Despite these failures however, Clark's plan did not increase her government's carbon tax by 10 per cent annually starting in 2018, as recommended by the Climate Leadership Team (CLT) she assembled to advise her:

"I have to balance the need to make sure our carbon tax remains world-leading with the obligation to ensure that family affordability is that the forefront of our minds, as well protecting our economy and job creation,” she told reporters at a warehouse in Richmond, B.C. "We will consider raising the carbon tax as other provinces catch up.”

While none of the CLT's recommendations were fully adopted into the new plan, the province addressed at least 18 of them. Examples include cash incentives for clean vehicle purchases and strengthened low-carbon fuel standards so all vehicles with be 15 per cent cleaner by 2030. The difficult work of reducing greenhouse gas emissions however, was put off to an undefined later date.

Relying on forestry and agriculture for reductions

The plan also contains an ambitious net-zero-ready goal for all new buildings by 2032, to be met through incentives for energy-efficient buildings, more stringent efficiency requirements for natural gas furnaces and heat pumps, and new permissions for municipalities to enforce cleaner, greener building codes.

Reductions in the industry sector will come primarily from reducing methane venting and leaks, and powering natural gas production and processing with electricity. Most of the “heavy-lifting” in emissions reductions however, will be done by the forestry and agriculture sector, according to Pacific Institute for Climate Solutions director, Sybil Seitzinger.

She offered an initial, independent review of the climate plan during the announcement, and told reporters that its forest rehabilitation initiative and nutrient management programs will not be enough put the province on the right track.

“We have a long way to go,” she explained. “While the 21 actions announced in this new plan hit all the major sources of emissions, collectively, according to what I can see, they will not even take us half-way to towards the 13 Mt target.”

Clark’s commitment to liquified natural gas (LNG) development could also prove problematic, Seitzinger added, despite a commitment in the climate plan to work towards an upstream methane emissions reduction of 45 per cent throughout the sector.

Full steam ahead with LNG development

When asked by National Observer how LNG projects like the monster Pacific North West proposal fit into her new climate plan, Clark said new clean restraints on the industry and other reduction initiatives will compensate.

“Even with LNG projects, with this plan, we will reduce emissions by 80 per cent,” she promised, emphasizing that the climate plan is a fluid document that will be updated regularly with more ambitious moves.

“This isn’t the end of it, but these are very, very big steps — many of them difficult to implement — but just because it’s hard doesn’t mean we can’t do it.”

According to Josha MacNab of the Pembina Institute however, it is very likely that Clark is wrong.

“If we look at a project like the Pacific North West LNG project, under this plan, its emissions profile would be somewhere 9.5 and 10.5 Mt. Given that 13 Mt is the target for 2050, it’s pretty much impossible to imagine a project like that going ahead while we meet our climate targets."

She joined Smith of Clean Energy Canada in predicting that the Climate Leadership Plan will not make meaningful reductions to B.C emissions for more than a decade.

The plan was informed a specially-appointed task force put together in May 2015 from a group of leaders in business, academic and environmental communities, as well as First Nations and local governments to "move the province closer to its long-term goals." After a lengthy public engagement period during which 7,604 people completed feedback forms and 8,282 constituents sent in emails, the team completed a list of 32 climate recommendations on November 27, 2015.

Critical suggestions included increasing the provincial carbon tax by $10 per tonne when the program freezes in 2018, commitment to 100 per cent clean electricity by 2025 (except where fossil fuels were required for back up), eliminating PST charges on electricity rates, and a new 2030 emissions target of 40 Mt per year.

The province said it would release its new leadership plan based on these recommendations in spring of 2016, but missed its own deadline by a number of months.

"B.C. has the capacity to do much more in the fight against climate change," said MacNab. "Not doing so passes the costs of dealing with climate change onto our children and grandchildren."

Highlights from the Climate Leadership Plan:

Under the plan, the provincial government will:

The only time this lady does

The only time this lady does not lie is when her lips are sealed.