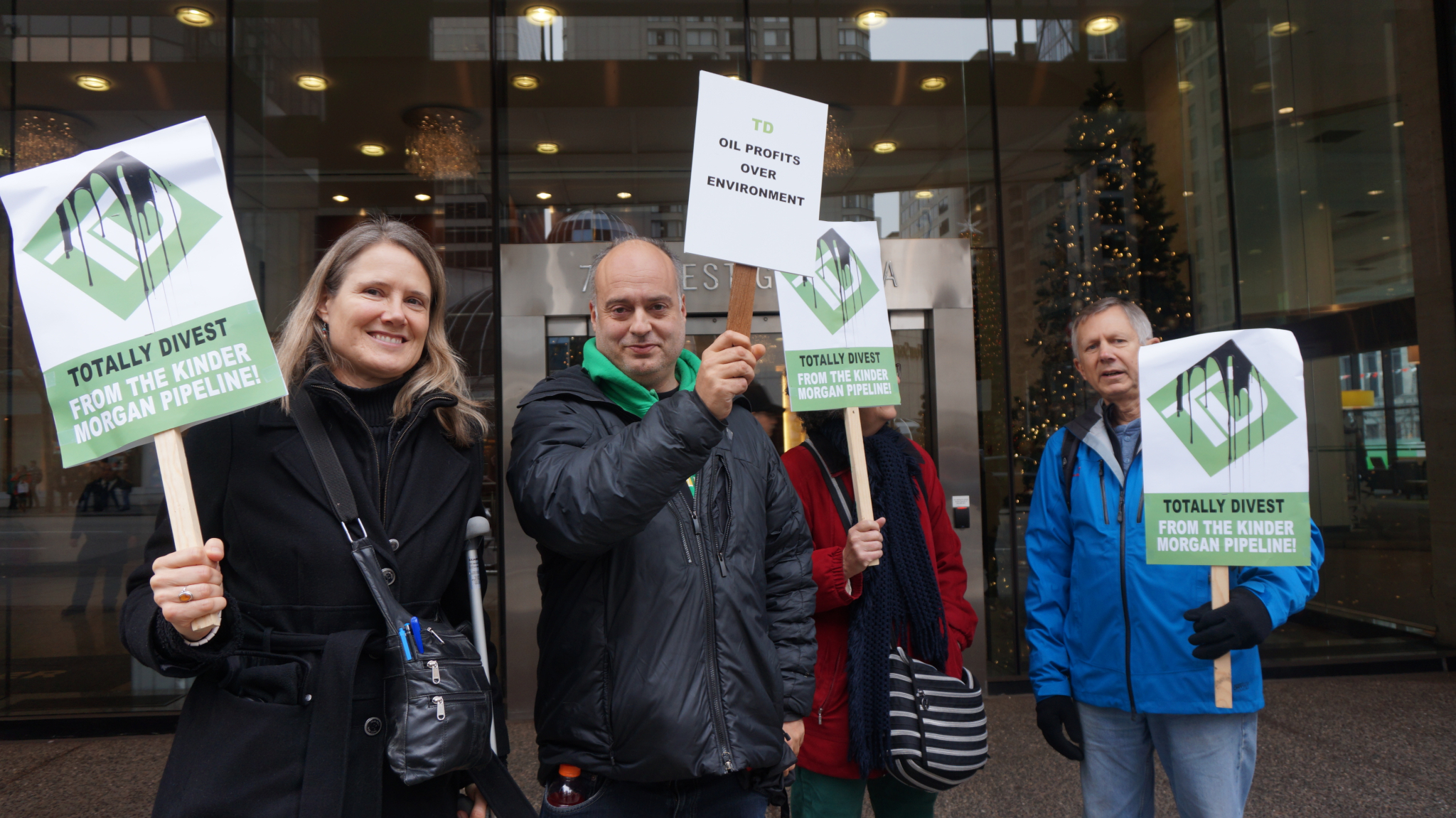 Stephanie Von Dehn, a Vancouver-based physician, stood in front of a TD Bank branch on Saturday afternoon carrying a sign depicting the bank's green logo dripping with black crude. She's been with the bank since 2012, but has decided to close five accounts at TD, due to its financing of Texas energy giant Kinder Morgan's Trans Mountain pipeline expansion.

"They've been the biggest investor in Kinder Morgan's pipeline, with over $730 million invested in this project," Von Dehn said. "I'm closing my account here and taking my money to a credit union this afternoon."

Kinder Morgan didn't respond to a request for comment about the protest.

Von Dehn told National Observer the reason she'd opened her account with TD was because she believed it was a "green" bank. TD Bank was the first North American bank to go carbon neutral in 2010 and has provided over $9 million to community environment projects through its TD Friends of the Environment Foundation since 1990, according to its website.

Its chief executive officer, Bharat Masrani, has also previously said that that TD Bank believes the transition towards a low-carbon economy will be gradual, but that fossil fuels will continue to sustain Canada's economy for the "foreseeable future."

Von Dehn said as a citizen concerned about climate change, she couldn't keep her savings in a bank that backed a major fossil fuels project in British Columbia. Kinder Morgan's pipeline expansion project, if built, would triple the capacity of the existing Trans Mountain pipeline to carry up to 890,000 barrels of diluted bitumen from Alberta to Burnaby, B.C.

Proponents of the project say thousands of direct and indirect jobs and millions in tax revenue would be created by the project. The federal government approved it in November 2016 after concluding that it was in the national interest. But the project has sparked significant opposition in parts of B.C. due to increased oil tanker traffic to the Burrard Inlet, its climate change impacts as well as not having consent from First Nations.

TD is the top bank among 26 financial institutions from Canada, the United States, Japan, Europe, and China that have committed about $7.25 billion through a combination of share purchases and loans. TD has committed $731 million to the project, and RBC $714 million.

"We are sorry to hear of her decision," said TD Bank spokesman Jeff Meerman. "At TD, we understand and appreciate the diverse views Canadians have about energy development, and are participating in the discussion because it is an important dialogue that affects Canada's future. TD is actively supporting the transition to a lower carbon economy, committing over $12 billion to date in financing and investments.

"That said, TD is also aware that Canadians will rely on conventional energy sources for several more decades to sustain our economy, create jobs and support a standard of living for our customers and communities. While Canada is transitioning to cleaner energy sources, TD believes that responsible natural resource development must balance environmental, social and economic considerations."

Meerman added that on Monday, TD announced initiatives to promote growth in the low-carbon economy, including CDN$100 billion in low-carbon lending, financing, asset management and other programs by 2030.

But Von Dehn said that TD should also eliminate its investments and backing of Kinder Morgan, not only for environmental reasons but also because other major banks were pulling out of their investments in oil and gas.

"Look at the World Bank. It said it was no longer going to finance fossil fuels after 2019," she said, in reference to the recent announcement at the One Planet Summit in Paris that the World Bank would stop financing upstream oil and gas projects except in the poorest countries in exceptional circumstances.

AXA, the world's third largest insurer, also announced at the summit that it will cease insuring the oilsands sector and new coal projects, and divest more than US$3.5 billion from oilsands and coal companies. This includes divestment from energy giants TransCanada, Kinder Morgan and Enbridge, all of which have Canadian offices and are constructing major pipelines: Keystone XL, the Trans Mountain expansion and Line 3, respectively. AXA also said it would increase its green investments fivefold by 2020.

"The Canadian Medical Association has already divested itself from fossil fuels," she said, adding that as a doctor, she's been concerned about the public health implications of a pipeline through interior B.C., a region hit hard by forest fires in recent years.

"I've worked as a physician up and down the Trans Mountain pipeline route, in places like Vancouver, Kamloops, and Clearwater," she said. "People were choking from the ash from the wildfire smoke. These people are already being affected by climate change. This pipeline expansion is only going to make things worse."

Dr. Stephanie Von Dehn speaks about the public health concerns of the Kinder Morgan Trans Mountain oil pipeline expansion in front of TD Bank in downtown Vancouver on December 16, 2017. Von Dehn came to divest from the bank, which is among the major financial backers of the pipeline expansion. Video by Jenny Uechi.

Outside the TD Bank building, around a dozen people held protest signs around the bank, drawing curious looks and prompting comments from passersby.

Brent Eichler, an East Vancouver resident, said he isn't part of any climate advocacy organizations, but has been opposed to the Trans Mountain expansion for years.

"I go kayaking on the water all the time, and I really don't want to see more supertankers on there," he said. "I'm really frightened about climate change. It's the existential threat of our time."

He said he's protested in front of TD Bank before over its financing of Kinder Morgan, and that people he spoke to were often surprised to learn that the bank was among the pipeline expansion's financial backers.

"My father used to work as a welder for the Shell Oil refinery," she said. "But that was refined oil, and what Kinder Morgan is putting through the Trans Mountain pipeline is bitumen and condensate. If there's a spill, that's going to sink to the bottom and ruin everything on the ocean floor."

Both the federal government and the company have suggested that they'll be prepared to handle and clean up spills. Independent scientists and other stakeholders, including the B.C. government and Washington state are not so sure.

Dernisky said she has relatives in Alberta who are strongly in support of the Trans Mountain pipeline, but that she was concerned about its climate impact on younger generations. She was also said she opposed the expansion because of the long-term impact of oil spills in a marine environment. According to reports, over 25 years after the Exxon Valdez spill off Alaska's Prince William Sound, oil was still being dug up beneath beachside rocks, and the ecosystem still hadn't recovered from the initial spill.

Dernisky said she also had dealings with TD bank in the past, but that she wasn't willing to put in more money while the bank had investments in the Kinder Morgan Trans Mountain expansion.

By Clothilde Goujard | News, Energy, Politics | December 12th 2017
Reports from the Race to a Safer World

Thanks for the article. I

Thanks for the article. I left RBC private banking last summer for the same reason, their backing of the Kinder Morgan Pipeline. I wrote to the president of RBC about divesting from both the bank and their wealth management division. David McKay didn't reply, but I did get a letter from Jacqueline Mulenga from the RBC Client Care Centre in Winnipeg denying bank involvement in the financing of the Kinder Morgan Pipeline. I also sent the letter to the Globe and Mail for publication. It never was.

Stephanie Von Dehn and to all others who protested on a Saturday afternoon in front of TD -- thank you. There has to be a way we can stop this, a way we can organize the multitude of Lower Mainlanders and Islanders who don't want our province exploited just so a Houston based company can get its bitumen to market.

Trans Mountain Expansion Pipeline (TMEP) dilemma !
1.Our PM says ”governments issue permits, but ONL !Y communities give permission”…should we believe this ? Minister of Science tells us that “We need to be basing our decisions on SCIENCE”… !
2.. Imagine the joy in Kinder Morgan headquarters…when wannabe prime minster Justin Trudeau told the media that he ‘preferred’ the Trans Mountain Expansion Pipeline(TMEP) project !
3. “the Federal government is (starting) spending $80 million on oil spill research”(recent Vancouver Sun news)……in search of a proven method to clean up spilled bitumen ??
4. Canada’s Senate Pipeline Study made recommendations… on “how the government can restore legitimacy to the pipeline approval process. “Should be interesting ?
5. Risk assessment ,just more statistics…a waste of time some will say…. Not so fast…I’d guess that Alberta government is ‘spending’ plenty to control/reduce future flood damage in southern Alberta---and risk assessments by the best scientists in the business are working now to reduce future damage… …Maybe the new Chief Science Officer, with help from recognized risk assessment experts could study Alberta flood and BC tanker dilbit routing/leak scenarios --before it’s too late !
6.Let our PM keep his word and mediate the dilbit export plan to ensure that risk is minimized ,starting now !
Carl Shalansky, P. Eng. (Retired)
Blog: https://redfern3359.wordpress.com/
(604) 986-4657