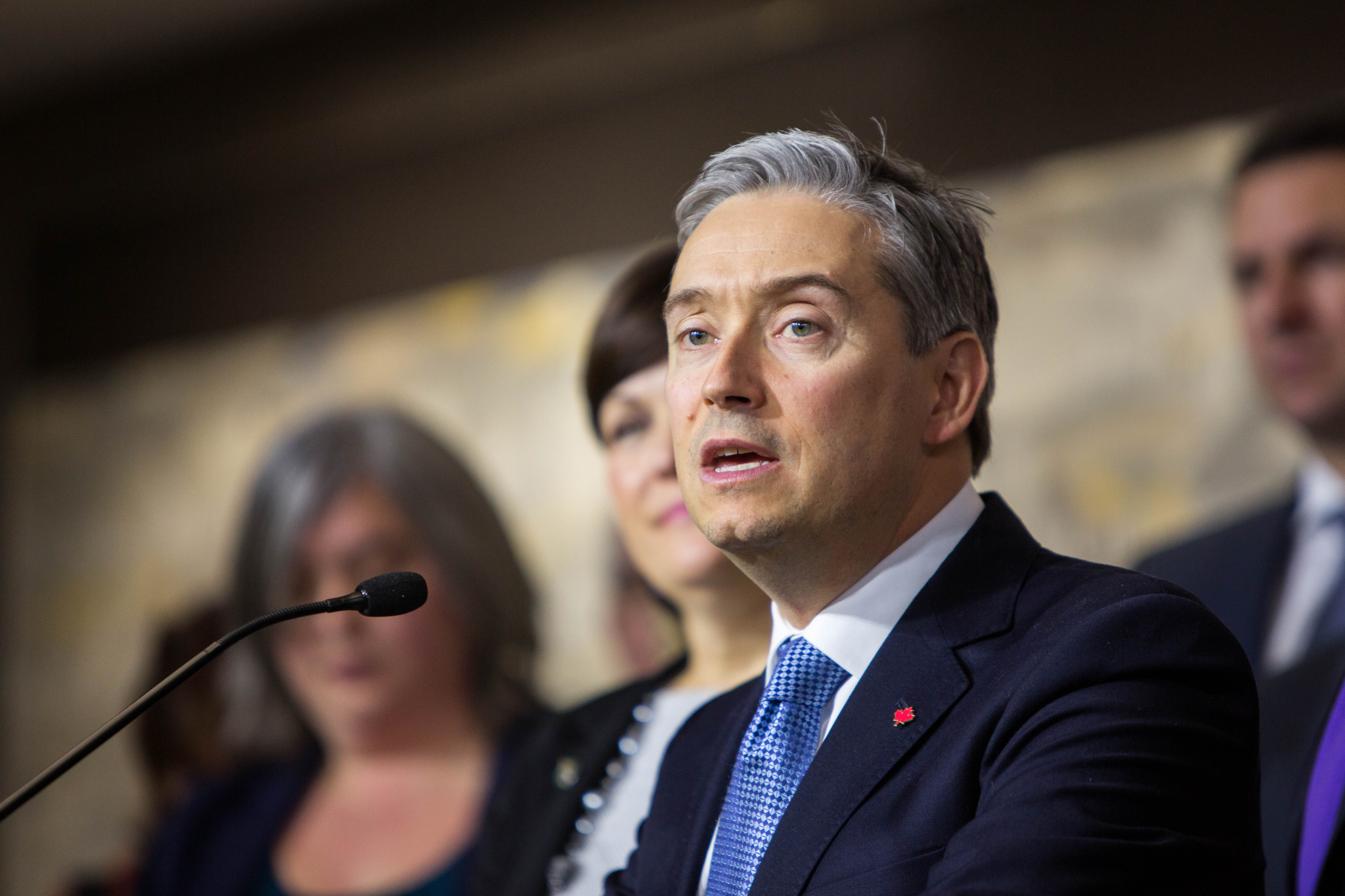 Backed by a coalition of stakeholders and activists, International Trade Minister François-Philippe Champagne announced the new position on Wednesday, putting Canadian businesses on notice that they could soon be forced to cough up records in order to clear up accusations of irresponsible practice.

The news follows a decade of pressure from civil society groups around the world, which have called for more accountability over serious human rights violations tied to Canadian companies, including allegations of slavery, sexual assault and homicides.

The full co-operation of companies in these investigations "is not optional," said Champagne at a news conference in Ottawa, adding that he is willing to use his "authority" to force companies to produce internal documents if it is necessary.

"I am adamant that Canada be second to none when it comes to business and human rights," he said during the announcement on Jan. 17. "We all know we won't get there overnight, but I believe the creation of the CORE is an important step in the right direction."

The new watchdog, called the 'Canadian Ombudsperson for Responsible Enterprise' (CORE), will have powers to independently investigate complaints of human rights abuse at the hands of Canadian companies, make public recommendations to remedy the issues, and monitor the implementation of those recommendations.

Office will zoom in on extractive sector

Champagne did not provide a timeline for when the ombudsperson will become operational, but said "as soon as possible" is the target.

The full co-operation of companies in these investigations "is not optional," said Champagne.

Canada's current Extractive Sector Corporate Social Responsibility Counsellor, Jeffrey Davidson, will finish his mandate in May 2018, after which his work will be folded into the new ombudsperson's portfolio. Both Davidson's office and the National Contact Point, Canada's two existing remediation mechanisms, have been widely criticized for their overlapping roles and alleged ineffectiveness, as they rely on the voluntary participation of companies.

The new ombudsperson — "the first of its kind in the world," according to Global Affairs Canada — will be appointed through an Order in Council process and serve a term up to five years.

Once the office is up and running, Global Affairs Canada confirmed that it will put a magnifying glass on the extractive and textile industries first, which are notorious for their association to human rights abuses in developing countries. The minister has given the ombudsperson a year to expand its work to other Canadian sectors, and vowed to provide the CORE with the "tools and resources" to ensure full compliance from companies.

Asked by National Observer how the ombudsperson could possibly investigate thousands of individual complaints tied to a wide range of industries around the world, Champagne said the office will focus on what's "practical." The priority was not to create a watchdog that will look at "everything everywhere," but one that is "targeted," he explained.

“I think there is enough evidence to suggest... there’s things we need to look at first," said Champagne. "After that we say it needs to be practical, so we say the ombudsperson will decide whether and how to investigate."

Will the new watchdog have teeth?

While the CORE will have full discretion to undertake both joint, and independent, fact-finding missions and investigations, it's unclear whether any of its recommendations will be actually be enforced. The ombudsperson will report on its findings every step of the way, Global Affairs Canada confirmed, but Champagne declined to say whether the new watchdog's findings would translate into tangible action.

The minister suggested that making "public recommendations" is the office's primary responsibility, and said he hopes shareholders, investors and financial institutions will make their investment decisions accordingly.

"We will do our part for the Government of Canada if there’s wrongdoing and recommendations that are being put in place, but I think the fact that the ombudsperson will report throughout the investigation and make these recommendations public — I mean, you have people here who are representing ethical investment. These people will make sure that the investment community understands that we have an issue here."

Civil society groups, which have long called for a human rights watchdog with proper "teeth," had mixed reactions to Champagne's comments.

Karyn Keenan of Above Ground, which has supported the creation of the ombudsperson's office for years, said her organization will be watching closely to monitor the CORE's effectiveness.

"We'll continue to engage with the minister's office to try and encourage them to put more binding mechanisms in place to ensure that those agencies are forced to follow those recommendations," she told National Observer.

Jamie Kneen, communications director for MiningWatch Canada, expressed concern with how the office will carry out its work "in practice."

"Will the ombudsperson actually be able to demand documentation from companies?" he asked. "Will they be able to deal with the claims of commercial confidentiality that will undoubtedly be trotted out to protect companies' operations, and beyond the sort of naming and shaming aspect, will they really be able to point fingers?"

Both organizations were among those who stood behind Champagne for the announcement.

It's been nearly 10 years to the day since Liberal MP John McKay — a longtime advocate of corporate social responsibility — proposed Bill 300, An Act respecting Corporate Accountability for the Activities of Mining, Oil or Gas in Developing Countries, in Parliament. His proposals to promote best practices in the extractive sector abroad have fallen flat in the House of Commons twice, but he hasn't lost hope that progress will be made.

Standing side-by-side with Champagne on Wednesday, he called the upcoming CORE a "very, very significant step" in the evolution of CSR in Canada, despite questions circulating about its true ability to crack down on offending companies. Even if the ombudsperson can't put a stop to government financing of a corporation, for example, it can still name and shame it, which may be "the most important sanction" there is, he explained.

"Bear in mind, frequently these companies are multibillion-dollar companies, and they have spent literally millions, if not hundreds of millions of dollars, protecting their brand," McKay told National Observer after the announcement.

"And to have a report form a responsible ombudsperson who has conducted a responsible investigation, which is a negative report, diminishes their reputation and their brand. I don’t think you can underestimate the importance of that report."

Pierre Gratton, president of the Mining Association of Canada (MAC), also said he was pleased with Wednesday's news. The MAC, which represents more than 40 of Canada's major mining companies, initially opposed the creation of the ombudsperson's office, but changed its tune under certain conditions. It opposed the office having any judicial powers, asked that it examine all Canadian enterprise overseas (not just mining), and asked that an advisory group be created to include industry in the conversation.

Champagne appears to have accepted all three of those suggestions; he launched the multi-stakeholder advisory group that will help the government and CORE carry out its responsibilities abroad, extended the mandate of the watchdog to other industries, and declined to say whether the office would have any special legal powers that go beyond independent investigations, reports and recommendations.

"I think having a place for more constructive dialogue than we’ve had for the last five years would be welcome," Gratton, who attended the announcement, said in a phone interview. "It's a grievance mechanism. For us, the most important function it can provide is to find solutions on the ground so that communities, if they have legitimate complaints, that they're addressed and redressed so the company and community can move forward together."

On its website, the MAC says members voluntarily subscribe to as many as 17 different international standards dealing with human rights, environmental protection, anti-corruption and community development, including the OECD Guidelines for Multinational Enterprises and the UN Guiding Principles of Business and Human Rights.

Allegations of human rights abuses at the hands of Canadian companies abroad have become a black eye for Canada internationally, attracting the attention of at least five United Nations organizations over the last few years. In June, the UN Working Group on Business and Human Rights scolded Canadian corporations and governments for having “patchy practices” on Indigenous consultation, environmental pollution and preventing violence against human rights defenders in the extractive industry, both inside Canada and overseas.

A recent study commissioned by PDAC — an industry association with over 8,000 members around the world — found that Canadian mining companies were at the heart of at least 55 mining-related social conflicts between 1999 and 2009. It identified at least 171 incidents for companies worldwide with Canadian-owned operations most likely to be the source of problems.

The Toronto-based Barrick Gold, whose North Mara gold mine in Tanzania has been linked to 65 deaths and 270 injuries since 2006, welcomed Champagne's announcement warmly.

"We look forward to engaging with the ombudsperson in a transparent and constructive manner, to assure Canadians that mining activities continue to generate economic and social benefits for host communities and governments, while respecting human rights," said a statement published on the company's website.

Accountability and respect for human rights are a top priority for Barrick Gold, said its senior vice-president of communications Andy Lloyd, who sent emailed comments on Wednesday afternoon.

"We will absolutely engage with the ombudsperson on any matters involving Barrick. I can’t comment on hypothetical recommendations in the future, but I would point to our participation in the NCP process in the past, as an example of our willingness to listen and improve," he said.

"If this process ultimately provides Canadians with greater assurance that mining activities are carried out responsibly and with respect for human rights, that’s a good thing."

Canada’s federal NDP also chimed in on the announcement, promising to work with the Liberal government as necessary to support the ombudsperson’s work.

“We want to see these powers enshrined in legislation, not just by Order in Council,” said Hélène Laverdière, NDP critic for foreign affairs, in a press statement. “We also hope whoever is appointed to this position has expertise in labour, human and environmental rights.”

Editor's Note: This piece will be updated with additional interviews and commentary as they become available throughout the day. A correction was made to this story at 9:30 p.m. Eastern Time to remove a photo that misidentified Pierre Gratton.

All depends on the

All depends on the legislation. So far, all we have is political hoo haw, which is meaningless.

What about the fracking and

What about the fracking and polluting extractive companies are doing in Canada, especially Alberta? It's all very well and good to look overseas, but people and animals are suffering and our environment is being contaminated right here!