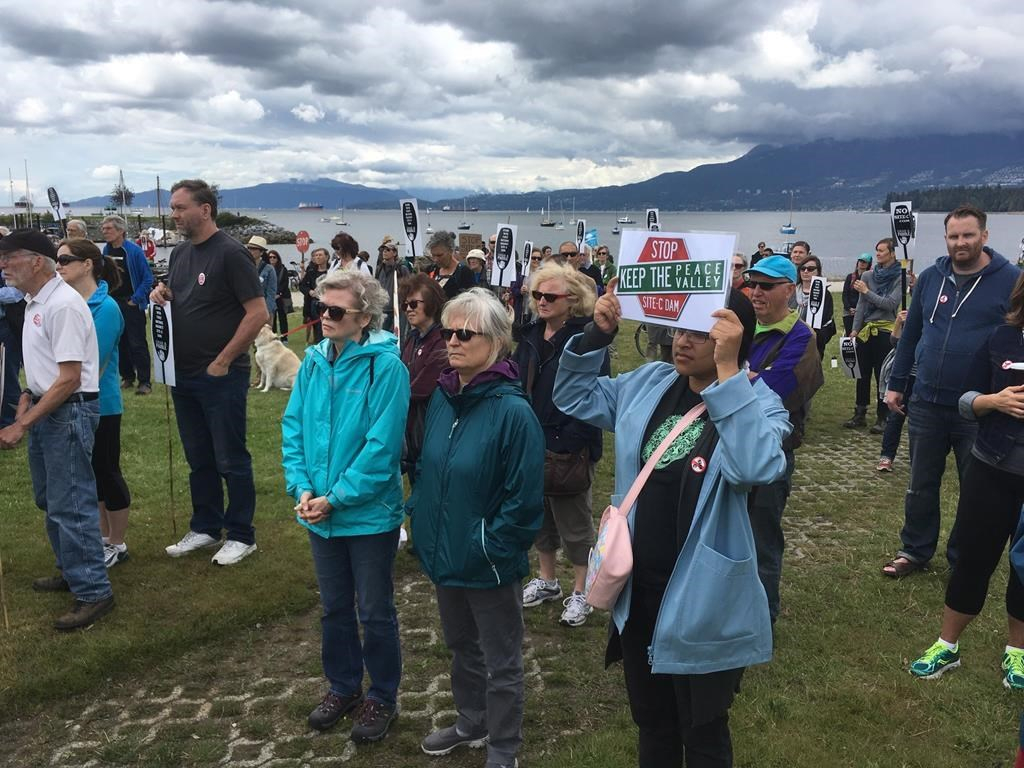 Dozens of people gathered at a Vancouver park on Saturday to protest the construction of the Site-C dam in northeastern British Columbia.

Protest organizers from the group "Fight C" said the dam on the Peace River proposed by BC Hydro is a waste of taxpayer money and infringes on the rights of First Nations.

The dam is estimated to cost upward of $8 billion and will generate 5,100 gigawatts of energy each year — enough to power 450,000 homes.

Those opposing the dam said the cost will only add to BC Hydro's ballooning debt of over $78 billion and the energy generated is not needed since excess energy from the province is already being sold to the United States.

"I think this is a political agenda, it's not for public necessity," said Fight C organizer Caroline Brown.

While the province approves of the project, the federal government must also give approval and Brown said there are hopes Ottawa will stop construction.

A number of lawsuits led by First Nations and environmental groups currently underway could also kill the project, Brown said.

Members of the Treaty 8 First Nations, from the Peace River Valley, who attended Saturday's rally said they do not approve of the dam that will flood lands they rely on for hunting and farming.

Connie Davis Brown, from the West Moberly First Nation, said communities around the site have not been properly consulted by BC Hydro or the provincial government.

"They have no remorse for us at all."

Preparation for construction has already begun with land clearing and new roads built leading to the site.

Brown said the development has caused berry bushes to disappear and changed grazing patterns of moose, making it harder for her family to find food.

Brown along with other protesters at the rally remain hopeful that the land can be salvaged if the project is stopped.

http://www.mypod.co.il/images/thumbs.php?key=133/]Igf 1 Capelli
Continue to keep an symptoms of asthma journal to record your signs or symptoms and triggers. By writing down the details of your respective situation everyday, you can watch for styles and establish unfamiliar activates. This will help to modify your environment, diet and routines for optimum control over your bronchial asthma.
http://www.aegeanclipper.com/img/session.php?u=97]Cialis Pills Online
Making use of keywords and phrases for search engine optimization is vital to effective search results. The ideal position of keywords are on top of your web site include in the label and headline. Likewise incorporate keywords and phrases in certain head lines and within the paragraphs on their own, if possible in the first and very last paragraph.
http://www.ozerkanplastik.com.tr/images/filter.php?jk=22]Jintropin Hgh
Should you be having difficulty setting up your posts and getting them go through, make use of the tried out-and-correct checklist format. Content articles organized as lists have shown to be extremely popular and successful online. The dwelling is a straightforward a single for authors to work alongside. Readers reply well to list-sort content. Listings continue to keep post paragraphs simple and punchy - perfect for on the web producing.
http://www.kamhootroksoong.com/wp-includes/confuse.php?k=Riptropin-Uk-Mu... Uk Muscle