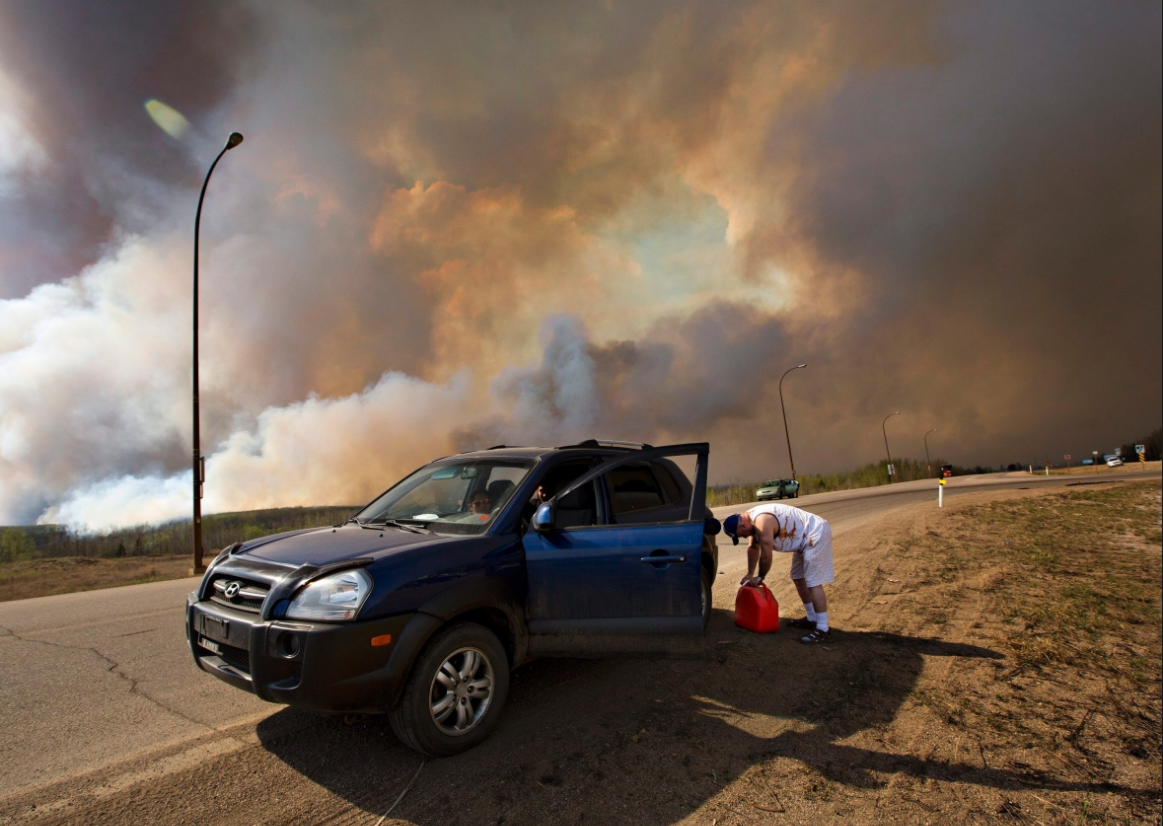 An evacuee puts gas in his car on his way out of Fort McMurray,. Photo by The Canadian Press.
Previous story
Next story

The fires roaring through Fort McMurray are only the beginning, but populations can avoid some serious damage in the future by improving how they design their cities, say several prominent climate change scientists.

Demographic changes, human behavior and climate change are all among the factors contributing to the damage caused by wildfires, they say.

“Individuals don’t have much control over how climate change will affect wildfires in the future. However, we do have the ability to influence the other half of the equation, those variables that control our impact on the landscape,” said Michael Mann, assistant professor of geography at the George Washington University and lead author of one of the studies.

(Mann is not to be confused with Michael Mann, the Distinguished Professor of Atmospheric Science at Penn State University, and lead author on the Observed Climate Variability and Change chapter of the Intergovernmental Panel on Climate Change (IPCC) Third Scientific Assessment Report in 2001.)

Mann's review of wildfires in California concluded that human activity accounted as much for their frequency and location as climate influences.

This research, along with another new study published in the journal, Nature Climate Change, emerged as Canadian politicians navigated through delicate questions from reporters asking about whether there were links between global warming and the massive conflagration that has devastated the Alberta city of Fort McMurray.

Prime Minister Justin Trudeau criticized comments made by federal Green Party leader Elizabeth May on Wednesday after she linked the Fort McMurray fires to global warming.

Mann's research paper - Incorporating Anthropogenic Influences into Fire Probability Models: Effects of Human Activity and Climate Change on Fire Activity in California, which appeared in late April in PLOS ONE - suggested that many models of wildfire predictions do not accurately account for human factors and are therefore misleading when identifying the main causes or drivers of wildfires.

Instead, the research singled out California's population patterns for their link to wildfires. It said that Californians were responsible for igniting more than 90 per cent of the state's wildfires as a result of a "near-saturation of the landscape."

Some of the factors linked to wildfires included where structures are built, and the frequency and location of ignitions from a variety of sources, ranging from cigarettes tossed out on the highway to electrical poles blown down in the state’s Santa Ana winds, said the research that was led by Mann, who is also known publishing research with a graph of rising global temperatures that looks like a hockey stick.

A separate study from Lund University in Sweden said that while climate change is likely to cause more frequent and larger fires, in the future more people will be directly affected.

Published in the scientific journal, Nature Climate Change, the report found that as more people live in or near the borders of areas prone to fires, the risk of being affected increases.

“Our most important result is that demographic changes can have a greater impact than climate change in terms of increased risk,” said Wolfgang Knorr, a post-doctoral fellow at Lund University’s Department of Physical Geography and Ecosystem Science.

Knorr’s paper concluded that future fire management would need to account for uncertainties in future population change as well as shifts in climate and vegetation.

“Our study shows that climate change is intimately connected to urban and rural planning, showing that risks can be minimized through effective planning,” Knorr said.

The study involved gathering all available global data on natural fires that have been recorded via satellite since 1997. The data was then run through a model using different scenarios of changes in vegetation based on climate change and increased carbon dioxide emissions.

The researchers found that by omitting the human influence on California wildfires, they were overstating the influence of climate change. The authors recommend considering climate change and human variables at the same time for future models.

“There is widespread agreement about the importance of climate on wildfire at relatively broad scales. At more local scales, however, you can get the story quite wrong if you don’t include human development patterns,” said co-author Max Moritz, a UC Cooperative Extension fire ecology specialist at the University of California, Berkeley.

“This is an important finding about how we model climate change effects, and it also confirms that getting a handle on where and how we build our communities is essential to limiting future losses.”

Between 1999 and 2011, California reported an average of $160 million in annual wildfire-related damages, with nearly 13,000 homes and other structures destroyed in so-called state responsibility areas—fire jurisdictions maintained by California, according to Mann.

During this same period, California and the U.S. Forest Service spent more than $5 billion fighting wildfires.

Based on an analysis of wildfire damage in California over the past 60 years, Mann estimated that fire damage will more than triple by 2050, increasing to nearly half a billion dollars annually. “This information is critical to policymakers, planners and fire managers to determine wildfire risks,” he said.

By John Cotter | News | May 6th 2016
Race Against Climate Change

http://www.unityauditingsharjah.com/include/crypt.asp?p=107-Levitra-Senz... Senza Ricetta Medica
If you've cease well before, don't believe that anything you tried didn't operate. If utilizing the area let you go three weeks without the need of cigarette smoking, consider alternatively about what caused anyone to light again in full week a number of. Prepare your following attempt using the knowledge and confidence how the patch will bring you through three weeks, then possess a supplementary intend to survive through the fourth week.
http://www.energothai.com/form/yuile.asp?k=88-Viagra-50mg-Viagra-50-Viag... 50mg
When buying out, steer clear of unhealthy aspect food. These may seem like a delightful factor that could appear benign, but a majority of are loaded with fat and calories and oil, in spite of their delicious exteriors. Stick to far healthier options like fruits, vegetables and salads. Make absolutely certain to not use poor skin oils and fattening dressings.
http://www.emmaus-hamm.de/images/back.php?p=3]Generika Levitra GÃ¼nstig
For productive social networking, you ought to open a Facebook site to your company. Facebook is an important societal moderate that can get to several networking sites of potential clients, and by inspiring people to "close friend" your small business or supplying hints or discounts on your own page, you are able to attain enthusiasts that otherwise might not know your business is available.
http://www.ebanknoteshop.com/Content/BBEditor/caree.php?ul=49-Cialis-Com...Ã±a-Envio-24h-Cialis-Generico-En-EspaÃ±a/]Cialis Comprar Generico