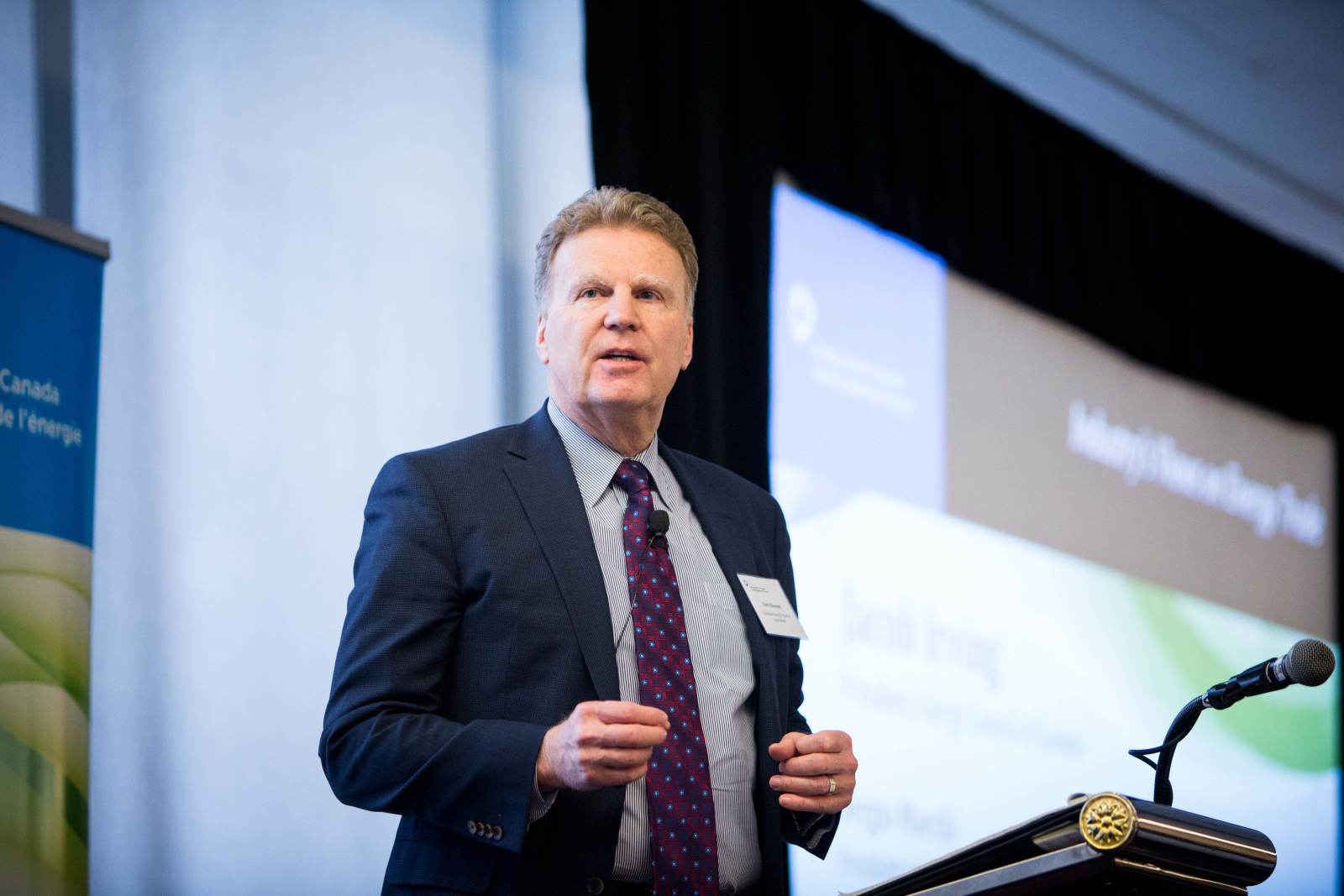 Chris Bloomer, president and CEO of the Canadian Energy Pipeline Association, talks about trade and policy during an Energy Council of Canada conference in Ottawa on Mon. Feb. 5, 2018. Photo by Alex Tétreault
Previous story
Next story

As the administration of President Donald Trump clears the path for new oil and gas projects in America, the head of Canada's largest pipeline lobby group says Canada would do well to follow suit.

In recent months, the White House has taken steps to reduce regulatory hurdles for industry, including a proposal to eliminate some safety regulations for offshore oil and gas drilling. It has also rolled back nearly 40 environmental regulations, many of which imposed pollution and wildlife protection measures on fossil fuel projects.

In Canada, the nation's top pipeline lobbyist says energy companies are about to fall behind their American counterparts.

If it wants to remain competitive, said Chris Bloomer, president of the Canadian Energy Pipeline Association, Canada needs to "look in the mirror" and ask itself — like America does — "Gee, what's in our best interests today?" Without making any direct reference to Trump, he said that's the approach that the U.S. has taken, as they chase their goal of being "energy dominant."

“Our resource is equivalent, and we’re not attacking it the way they are in the U.S.," he told a business crowd at an Energy Council of Canada conference in Ottawa on Monday. "And it’s becoming fairly clear that without new policies that enable this industry to develop those resources and to be able to access new markets, it’s going to be very, very challenging.

"And we’re going to lose. We’re already losing a tremendous amount of value in our exports today."

Two trains, barreling down the track

The Canadian Energy Pipeline Association represents Canada's transmission pipeline companies, who ship 97 per cent of the country's oil and natural gas on roughly 119,000 kilometres of pipeline in Canada, and 14,000 kilometres in the United States.

But the U.S. shale revolution has put a tight squeeze on Canada's oil and gas producers in recent years, resulting in thousands of job losses and plummeting prices for Canadian oil. While much of Monday's discussion focussed on the impact NAFTA renegotiations could have on industry, Bloomer put the spotlight on Canadian policy.

Speaking on a panel with Tim McMillan of the Canadian Association of Petroleum Producers and Sergio Marchi of the Canadian Electricity Association, he likened Canada and the U.S. to two trains with equivalent resources "barreling down the track." While America reduces regulations, reduces taxes, increases exports and provides new opportunities, Bloomer explained, Canada is turning its head the other way.

"They’re going as fast as they possibly can in that direction, and it just seems like Canada is going as fast as we can in the opposite direction," he said. "You can’t get things done, and we’ve got uncertain regulatory policy, we’re mired up in our own kind of politics and we’re not seeing the world for what it really is. That’s the problem that we need to fix.”

National Observer reached the lobby group to ask whether Bloomer could explain his comments. He didn’t immediately respond to this request.

Pipelines the 'industry of the future'

The federal government is expected to table new legislation in Parliament this week that will change the way the country evaluates major energy projects and protects its waterways. It begun that process on Tuesday with new amendments to the Fisheries Act that, if approved, will include new measures to protect fish and fish habitat.

While many of the anticipated changes are to restore environmental protections pieced apart by a 2012 omnibus bill of the former Stephen Harper government, others aim to restore trust in Canada's regulatory process for the oil and gas industry — an election promise of the Trudeau government.

On Monday, Bloomer said the announcement of new environmental and assessment reforms will be a "very big moment" for resource development across the country. He said pipelines are "the industry of the future," and that industry requires regulatory certainty.

While touting the future of pipelines however, Bloomer acknowledged that Canada's advantage in selling oil and gas to the U.S. has "changed forever," as a result of shale development.

The problem with this selfish

The problem with this selfish viewpoint is that we've spent literally decades ignoring climate science, while we focused our attention solely on a "Gee, what's in our best interests today?" approach to energy and industry. Same goes for our use of plastics, our approach to urban planning, our investments in transit infrastructure, our adoption of pesticides, and so on. While we've been busy asking "Gee, what's in our best interests today?" and the closely related "How do I avoid paying any taxes?", we've sold our kids' futures down a polluted river. We're causing species die-offs; coastal erosion; permafrost melt; climate instability; increasingly costly and destructive weather-related catastrophes and losses; air, land, and water pollution; escalating cancer and disease rates; migration of disease-carrying vectors; and so on, and the projections for the future are absolutely dire, in our own children's and grandchildren's lifetimes. We won't be able to buy our way back out of this, and the vast majority of the wealthy is in any case landing in the pockets of the grotesquely wealthy already.

I'm fed up hearing the ignorant and shortsighted views of selfish industrialists and their lobbyists. If this is the way they want the human species to conduct itself, these people should all commit themselves or their already-arrived children and grandchildren to sterilization, as they are intent on wiping out the future prospects of the next generations. Seems only fair that they demonstrate their commitment to a devastated planet by refusing to populate it any further. Second, they should promise to pick up the tab for all weather-related catastrophes that exceed the characteristic averages of the past 50 years. Make those commitments, and then, gee, maybe we'll talk.

Well stated; I couldn't agree more. If we don't take action now, our grandchildren will ask all of us what we were doing while there was still time. How will we answer them?

Do not blame them. They are

Do not blame them. They are only doing their job, which is to make as much money as possible for their shareholders. It is that law which needs to be changed. Regulation can only do so much.