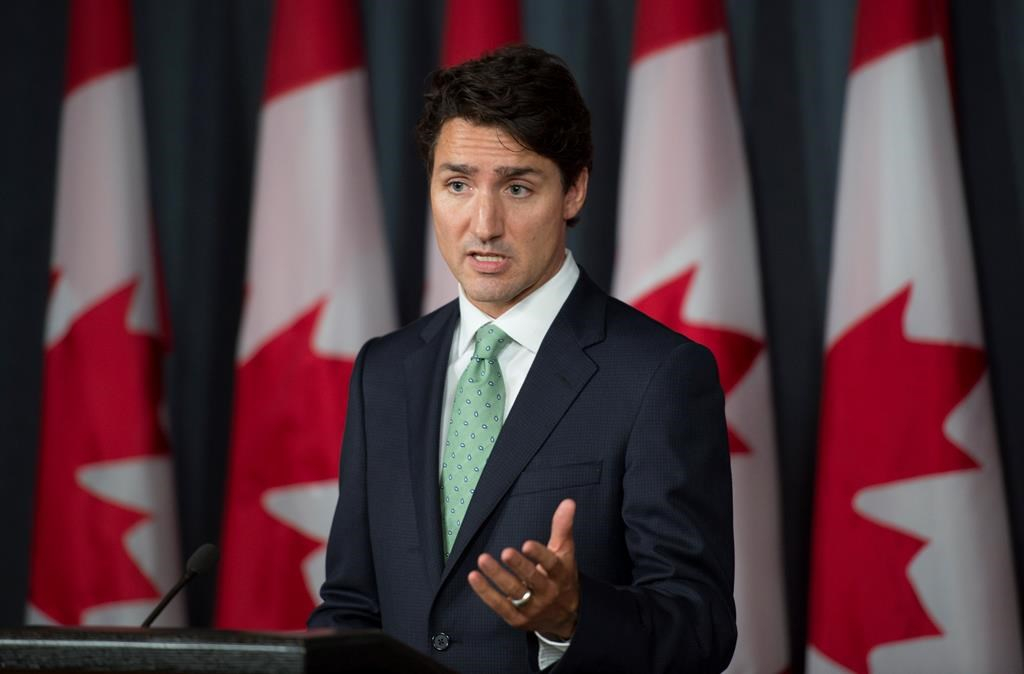 Prime Minister Justin Trudeau is being criticized by political opponents for the "contradiction" inherent in promising to reduce greenhouse gas emissions while approving a monster LNG project that will increase them. File photo by Canadian Press.
Previous story
Next story

Less than 24 hours after the approval of a controversial $36-billion liquefied natural gas project in British Columbia, the Trudeau government — swooned over for its bold climate commitments in Paris last year — has found itself under attack for what critics label a major conflict between its environmental commitments and economic interests.

But while a number of critics warned the Pacific Northwest LNG project was an unmitigated environmental disaster, inside the House of Commons, the official opposition Conservatives accused Prime Minister Justin Trudeau of being too tough on industry by "bogging down" the project with nearly 200 conditions.

"The headlines seemed good, but beyond the headlines was a lot of fine print, 190 conditions for the LNG project to move forward including — wait for it — more consultations after almost six years of consultations," said interim party leader Rona Ambrose during the daily question period on Wednesday.

"Thousands of unemployed workers and their families are depending on this project to go ahead. Approving the project is one thing. Getting it built is what matters. There are no jobs until there are shovels in the ground."

Trudeau responded by saying that his government was showing leadership through its decision to extend an environmental assessment of the project by a few months before it announced its decision, and that Conservative Party criticizes him both for going “too fast” and for “not going fast enough.”

"That is why we took our time," he explained. "We have made sure to do things right to demonstrate the community support, the Indigenous support, and the fact that world-class science is going on while we grow the economy and create jobs for the middle class. It is what Canadians expect. It is what this government is delivering."

One of the largest emitters in Canada

The Petronas-led Pacific Northwest LNG project would be built on Lelu Island near Prince Rupert, B.C., directly within the province’s stunning Great Bear Rainforest. Upon completion, it would ship 19 million tonnes a year of liquefied gas to markets in Asia while pumping more than five million tonnes of carbon dioxide annually into the atmosphere.

That would make it one the largest single greenhouse gas emitters in Canada, according to the Canadian Environmental Assessment Agency, and is the reason many environmentalists have described the project as a "carbon bomb" and were up in arms over its approval.

The federal government says it has addressed these concerns through its 190 legally-binding conditions aimed at minimizing impacts to fish habitat, marine mammals, wetlands, migratory birds and human health. At the project announcement in Richmond, B.C. on Tuesday, Environment and Climate Change Minister Catherine McKenna added that it was the first project to include a maximum cap on greenhouse gas emissions and had been subject to "rigorous environmental assessment."

During a media scrum in Ottawa on Wednesday, Natural Resources Minister Jim Carr also attempted to silence concerns that approval of the controversial project was somehow indicative that Kinder Morgan’s Trans Mountain pipeline — also in B.C. — would be approved as well. The fate of the hotly-debated oilsands expansion project will be announced by cabinet on Dec. 19, setting the stage for the next three years of environmental and energy policies.

“Kinder Morgan will be decided on its own merits,” Carr told reporters. “There is no linkage between these projects… Every project has its own nuance and its own set of challenges.”

A "galling" approval in the Great Bear Rainforest

Outside the Commons on Wednesday, NDP leader Thomas Mulcair slammed the prime minister personally for lauding the Great Bear Rainforest as one of Canada's most prized natural treasures before the Duke and Duchess of Cambridge in B.C. earlier this week, and two days later approving an LNG terminal and pipeline project that would plow right through it.

The Great Bear Rainforest’s conservation — achieved after two decades of bitter conflict between First Nations, stakeholders, and the provincial government — was dedicated to the Queen’s Commonwealth Canopy on Monday in a special ceremony attended by Prince William and Kate.

In French, Mulcair said the decision, when paired with the recent re-adoption of the Harper government's greenhouse gas reduction targets, represents a "flagrant contradiction" between Trudeau's words and actions. He accused the Liberals of talking a “good game” on progressive issues like the environment, and then backing down as soon as the issue is actually on the table.

"A natural gas pipeline in the Great Bear Rainforest will become the flash point for people who are concerned about Aboriginal rights, about the future of our planet for our children and our grandchildren," he explained.

"That we get Stephen Harper's plan, and a pipeline in the Great Bear Rainforest? I mean, sometimes there's a time lag that makes people forget. When it was 48 hours that you were showing great emotion with members of the Royal Family in that same place, it's, it's beyond comprehension."

The approval struck a similar chord with Grand Chief Stewart Phillip, president of the Union of BC Indian Chiefs, who on Monday, refused to attend a symbolic reconciliation ceremony in Victoria with the royal couple, on the grounds that Trudeau’s government had not yet taken sufficient action to reconcile with, or improve the quality of life for Indigenous people in Canada.

Philip said the LNG approval "completely vindicated" his decision not to attend that particular event, and promised to support First Nations affected by the project in whatever lawsuits they bring forward against the federal government.

“Without question, it’s a demonstration of complete and total hypocrisy on the part of the Trudeau government," he told National Observer.

"The faith that we carried forward on Oct. 20, 2015 is eroding on a daily basis with the complete contradictions inherent within the Trudeau government in so far as them making lofty, eloquent statements on their intent to honour the UN Declaration on the Rights of Indigenous Peoples, protect and defend the environment, and the interest of British Columbians in that regard, and on the other hand doing exactly the opposite.”

The project has 190 conditions, he said, so the government may expect up to 190 lawsuits. Even before the government announcement on Tuesday, a group of six First Nations from the Skeena corridor issued a release saying the project "does not meet the test" for respecting indigenous rights and would be challenged in court.

Environmentalists and at least six First Nations have denounced the Pacific NorthWest LNG project due to concerns over salmon habitat and at-risk whales and dolphins, while the project's advocates, including the B.C. government of Christy Clark, have called it a key economic driver for the country as a whole.

Ottawa says an estimated 4,500 jobs would be created during the construction phase of the project and 630 workers would be needed to operate the facility. On Wednesday, TransCanada — whose $6-billion Prince Rupert Gas Transmission pipeline hinged on approval of the LNG project — said it was pleased with the decision.

“We are pleased that a decision has been made to approve Pacific NorthWest (PNW) LNG's liquefaction facility in British Columbia,” Tony Palmer, president of Prince Rupert Gas Transmission Project, told National Observer in an email.

“While PNW evaluates the conditions of its CEAA permit, we look forward to continuing to work with our Indigenous partners and stakeholders as our customer moves toward a final investment decision.”

Government approval, however, doesn't necessarily mean the massive LNG project will ever get underway; low global oil prices and an increasing supply of natural gas have depressed international prices for LNG, making the economics of the project less certain than they were when it was first announced in 2013.

“I’d be surprised if even they go forward with it, because the economics are kind of iffy at the best of times,” said Reg Plummer, a retired economist for Natural Resources Canada.

“It costs $4 or $5 per thousand cubic feet to liquefy and $2 to move it. That’s $6 that you need to subtract from the $6 or $7 you’re going to get for it when you get across to the Asian market. That leaves you $1 or $2 to get it to market, get it out of the ground, pay royalties and taxes, and the LNG tax.”

Add in the possibility of a hefty, national carbon tax — due in the Trudeau government’s climate plan sometime in November — and Plummer said financial return for investors becomes even less likely. He hadn’t crunched the numbers to determine how long it would take the $36-billion LNG project to pay for itself, but wondered whether investors or the federal government, had taken a carbon tax into account in their cost-benefit analysis of the project.

I am outraged, but

I am outraged, but unfortunately not surprised, by Trudeau's hypocrisy. Shame! I will remember this next time he campaigns for re-election.