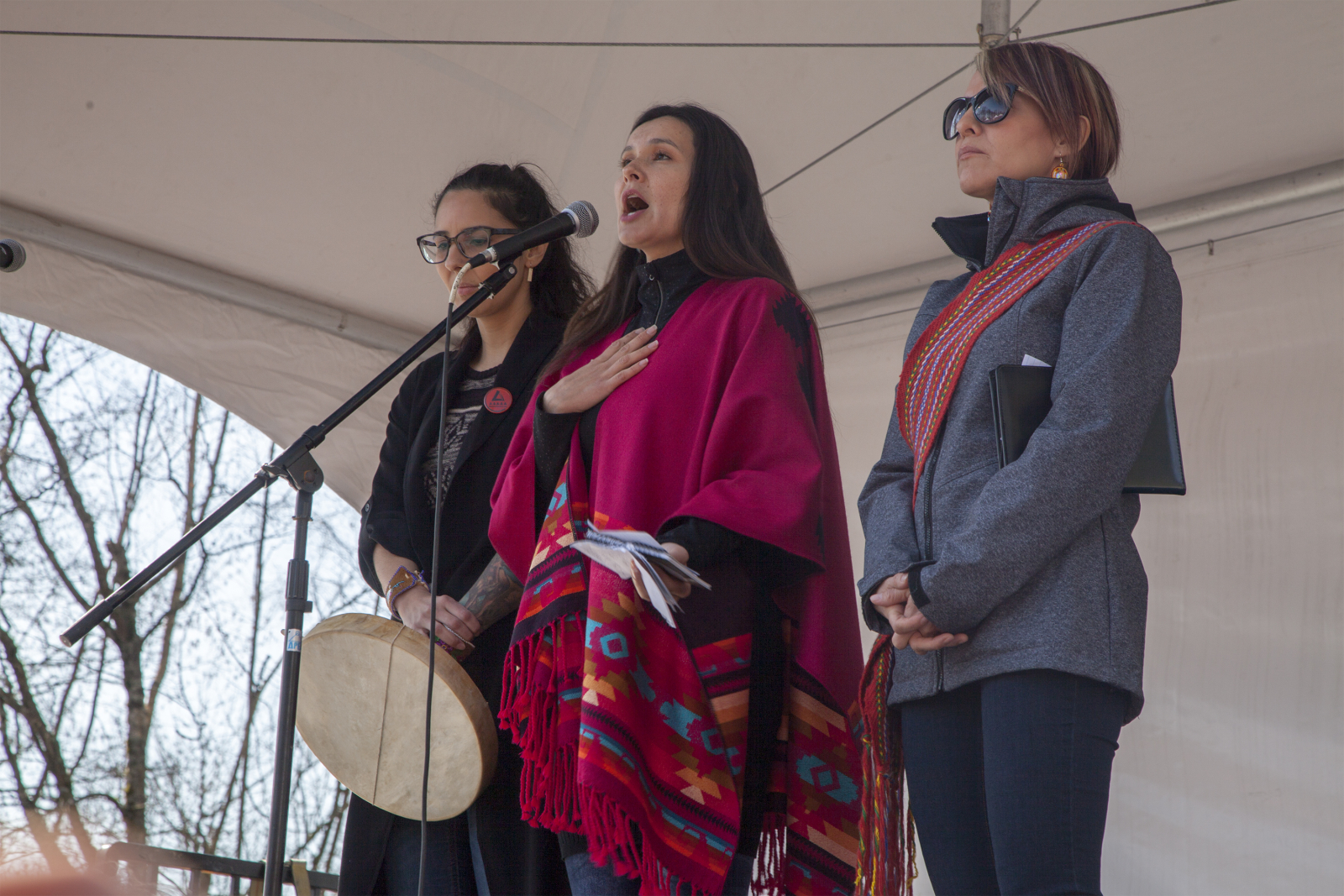 Melina Laboucan-Massimo (centre) speaks at the Protect the Inlet rally on Burnaby Mountain in B.C. on March 10, 2018. She is accompanied by Eriel Tchekwie (left) and Jesse Cardinal (right). Photo by Trevor Mack
Previous story
Next story

When I checked my email one day last week, there was a link to a piece just published in The Globe and Mail. A columnist named Gary Mason had used me as his foil to prove that protests against the Kinder Morgan Trans Mountain pipeline expansion were subversive plots imported from the U.S., part of a grand overall strategy to mess with the fossil fuel industry.

"While it may be anything but straight, you can draw a line between the January actions of a mayor in New York [divesting from fossil fuel stocks] and an environment minister in B.C. Somewhere in between is Bill McKibben and 350.org," he wrote.

I was mildly flattered, but also a little put out—I didn’t want anyone thinking I was taking credit that wasn't mine. So I asked The Globe and Mail if I could respond—indeed, I sent them a version of this piece. But they said no.

So let me use this space instead to try and answer Mr. Mason—who didn’t contact me before he wrote his screed—in five ways, and perhaps in the process help inform those Canadians who don’t understand why some of the country’s energy plans are so controversial.

First, it’s absurd to imagine that the leaders or the instigators or the strategists of the fight against this pipeline are American zealots. The leaders of the fight are, first and foremost, Indigenous people along its route. I’ve met some of them—Rueben George in British Columbia, say, or Melina Laboucan-Massimo in Alberta. I’ve not taught them a thing, but I’ve learned a great deal. The idea that somehow they’re not capable of mounting this resistance is—well, it’s racist, isn’t it?

Second, even groups like 350.org that work in other places have their Canadian policy set by Canadians. For instance, my longest-standing Canadian colleague may be Clayton Thomas-Muller, who indeed is in Vancouver this week helping organize the fight. A few hours before I read Mr. Mason’s little screed, I read the first draft of Thomas-Muller's memoir of growing up Cree on some of Winnipeg’s meaner streets. When it finds a publisher, Life in the City of Dirty Water, will be a vivid and remarkable reminder for Canadians that their history goes back well past Samuel de Champlain or John A. MacDonald.

Third, Mr. Mason’s notion that “environmental groups” from America are some kind of monolithic and unstoppable force is silly. For all his talk of the Rockefellers and California billionaires and so on, I’m not all that much of a Goliath. I’m an unpaid volunteer for 350.org who lives at the end of a dirt road in Vermont not all that far from the Quebec border. My involvement with climate change stems from my writing: 30 years ago I wrote the first book for a general audience on what we then called the ‘greenhouse effect.’ The End of Nature, serialized in the New Yorker, came out around the world, including in Canada.

Fourth, the idea that somehow these foreign environmentalists are anti-Canadian is incorrect. These groups are at odds with half the governments in the world, trying to slow the planet’s warming. In my case it’s particularly ludicrous. To the extent that I have character or values, they were formed in the Leaside neighborhood of Toronto in the 1960s, where I spent my grade school years. (My father was Canadian bureau chief for that radical rag, Business Week magazine). I’ve lost touch with my grade-school pals David Smith, Bruce Crawford, and Roddy Rennick over the intervening half-century but I think they’d vouch for me. My heroes were Canadians that even many Canadians may have forgotten (Dave Keon, anyone?); to this day I remember the Carling Red Cap theme song (“we are drinkers true”) because we third-graders strode arm-in-arm across the North Lea elementary school playground (boy’s side) singing it.

(Since one Stephen Harper was a year ahead of me, he can probably sing it too).

Fifth, and by far the most important, what Mason and the oil barons fear is not the distorting power of foreign wealth. (Any self-respecting oil company spends more money lobbying in a month than 350.org will spend in a lifetime). What they fear are the facts. People campaign against the Kinder Morgan pipeline not because the Rockefellers told them to, but because of basic reality.

The leaders of the fight against #kindermorgan are, first and foremost, Indigenous people, writes @billmckibben "I’ve not taught them a thing ... The idea that somehow they’re not capable of mounting this resistance is—well, it’s racist, isn’t it?"

To wit, if you’re an Indigenous person in Canada you may not want someone else putting an industrial project across your territory. If you’re a West Coast Canadian, you may not want to see tanker traffic increase by a factor of seven. And if you’re a Canadian who also lives on planet earth, you may understand that there’s simply too much carbon in Alberta’s oil patch. Perhaps that’s why so many Canadians are turning out this week in Burnaby to march.

For me, the math is simple. Justin Trudeau (who seems to me a slightly forced and twee shadow of his quite original father, the first political figure I ever knew about) came down to Texas recently to explain that “no country would find 173 billion barrels of oil in the ground and just leave it there.” Run the numbers: if Canada digs up that oil and runs it through pipelines and it gets burned in someone’s gas tank, then it will have taken up 30 percent of the planet’s remaining carbon budget. It was Canada, actually, that set this budget: its delegates lobbied at the Paris climate talks for a temperature target of 1.5 degrees Celsius. Now, the one half of one percent of the world’s population that lives in Canada wants to use up a third of the space we have left.

That’s not fair. And I remember Canadians as fair: such, anyway, were the values we Cub Scouts learned in the basement of the Leaside United Church two evenings a week, in between crab soccer and tobogganing trips to Serena Gundy park. Canadians were open to the world, too: I remember accompanying my father to the opening of Expo 67 in Montreal—it was a spectacle of confidence and pride. To listen to Mr. Mason whine you'd think that Trumpism was leaking north. Surely Canada can help solve the world’s problems, not make them worse. And surely Canada can understand why the rest of the world is interested. The carbon that pours into the atmosphere when Albertan oil burns circulates freely around the atmosphere within days. Canada’s borders offer no protection to the rest of the planet when it comes to climate.

Nor can those borders protect it. Canada, of course, will bear the burden of climate change like everyone else. Already the fires and the storms are on the rise; already the frozen ponds where I spent my childhood hours are freezing later and melting sooner. The peculiar physics of climate change means the north suffers first and worst; so to the extent that we outsiders help raise the alarm and head off the worst, perhaps we’re even helping out a little. I know that Carling Red Cap is no more, but perhaps someday Mr. Mason will buy me a glass of B.C. wine and we’ll drink to a common future.

Dave Keon, yeah I remember him, and Gump Worsley and Stan Mikita etc...
PET was the first PM I have a memory of he seemed to always be there, like a father.
We didn't sing the Red Cap song but I still recall a schoolyard chant we used to sing at recess.
It went like this...

I came to Canada in 1988. We bought a house in Malvern, at 14 Keon Place. I knew nothing at all about ice hockey (or, indeed, any other kind of hockey) and had never heard of Mr Keon. I soon learned that not only was he the winner of the Lady Byng Trophy but also that his number was 14 and that the Leafs had retired that number. It took a little longer to find out what both of those bits of information really meant.

It took me a little while longer to realize that some of my preconceptions about Canada were a little naive. The Globe and Mail is not actually a newspaper so much as a mouthpiece of vested interests. Mr Mason is not exactly a journalist either.

The only reason I subscribed

The only reason I subscribed to the Globe and Mail was for the often intelligent opposition points made in their comments section. Now that they've closed comments there is no way to combat the corporate spin on most of the articles. Sad.

Excellent article. Thank goodness we Canadians have the National Observer. Thanks to Linda and all your hard-working reporters and staff.

Corporate captured mainstream media to complement corporate captured policing, judges and police. Thank you National Observer for staying independent and thank you to all people standing up for justice!

I want a journalist to fact

I want a journalist to fact-check both essays please.

Linda
Could you please remind those of us with more failing memories, the Carling Red Cap theme song words?
PS - Glad I subscribe to National Observer and not the G & M.

My apologies, I meant Bill,

My apologies, I meant Bill, not Linda. If she knows the words too, either of you can reply!