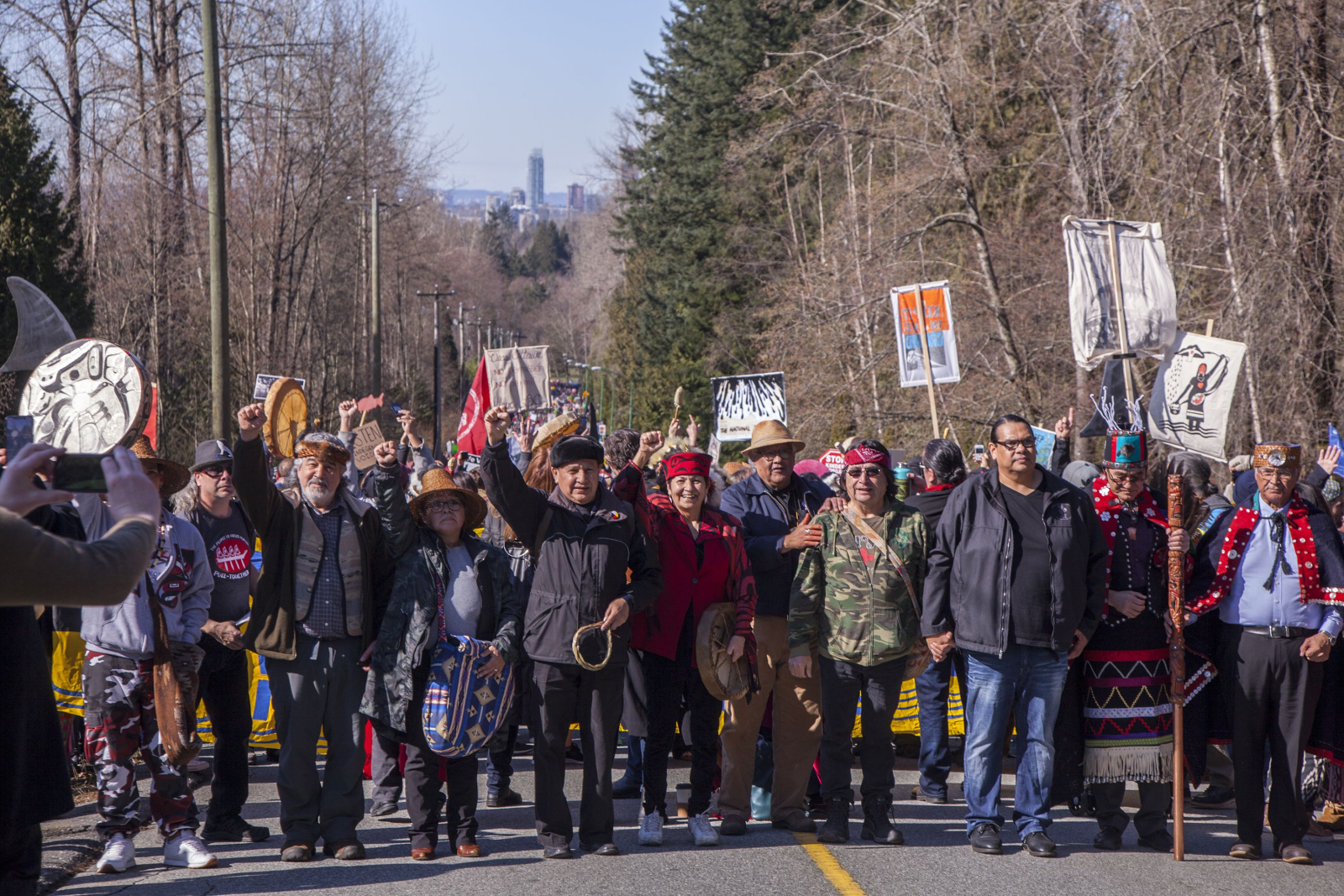 B.C. Supreme Court Justice Kenneth Affleck has granted a permanent injunction to keep protesters away from a construction zone in use by Texas energy company Kinder Morgan, explaining that he was "persuaded" the pipeline operator would suffer "irreparable harm" if the courts had done nothing.

But his ruling didn't give the energy company everything it wanted to proceed with construction of its Trans Mountain pipeline expansion project and the work it said it needed to do near a terminal in the metro Vancouver suburb of Burnaby.

Affleck said that Trans Mountain, a subsidiary of Kinder Morgan, would have "to tolerate a certain amount of irritation" from anti-pipeline protesters who have been setting up blockades on the site since November 2017 to foil construction plans. While the company wanted a 50-metre exclusion zone that would cover a new "Watch House" erected by the project's detractors on March 10, Affleck said the new structure could remain, allowing instead for a five-metre exclusion zone.

In doing so, he expressed "sympathy" both for Trans Mountain as well as his "sensitivity" to those who built the small structure which straddles the pipeline's route on the traditional territory of the Tsleil-Waututh and Squamish Nations.

The injunction was made following two days of hearings to review Kinder Morgan's claims that protesters were deliberately trying to harm the company by getting in the way of construction workers on site, forcing costly delays. The claim named 15 individuals, as well as John and Jane Doe, and "persons unknown" alleging that they were causing financial losses that the company intended to recuperate.

Kinder Morgan lawyer says it will pursue for damages

The new permanent injunction also follows a temporary injunction that Affleck granted the company on March 9.

Camp Cloud, which was cited by Trans Mountain's lawyers as being a "hot bed of the aggressive protester activity," will also be able to stay put 43 metres away from the construction zone.

"It is their right to protest, and to protest vigorously," Affleck said. "Our society is not so weak that it can’t bear the thought of people protesting at a level which at one time might have been seen as being legally offensive – now we can take much more."

Meantime, Shaun Parker, a lawyer for Trans Mountain, warned the defendants that the company was coming after them for damages.

“The defendants have claimed that Trans Mountain won’t pursue them for financial damages. This is untrue," Parker told the court. "Just because we believe the defendants won’t be able to satisfy the entire amount of damages, does not mean that Trans Mountain won’t see this through to the end. This case is more than a bird window. This is a major national infrastructure project that will take years of construction — there is plenty of time for this case to get to trial before the project is completed.”

If built, the Trans Mountain expansion would triple the capacity of an existing pipeline network, allowing it to carry up to 890,000 barrels per day of crude oil from Alberta, home to the world's third largest reserves of oil after Saudi Arabia and Venezuela, to the west coast.

Supporters of the project say it will promote jobs and growth in the oilpatch, while its detractors say it will lead to spills and push Canada's climate change goals out of reach.

Although the project has been described as a "twinning" of an existing pipeline, part of the expansion would include a different route through the Rocky Mountains to the coast.

Prior to Affleck's decision, Casey Leggett, a lawyer representing one of the people named in Trans Mountain's statement of claim, told the court that citizens have a constitutional right to protest the expansion of the Trans Mountain pipeline.

“The inconvenience, which my friends call a blockade, hasn’t gotten to the level of establishing irreparable harm,” Leggett said.

Leggett read from affidavits presented in court by a Trans Mountain lawyer, saying the company’s security staff noted protesters have sometimes stood peacefully at or near access roads to two marine terminals in Burnaby without disrupting vehicles or workers and left after police arrived.

He said in one case, a woman was seen praying on a road and didn’t engage with security staff while on another day a woman sat in a lawn chair as vehicles were guided around her at slow speed.

Affleck said while the first protester’s conduct was unobjectionable, the second woman had no right to sit in the middle of a public road and the police would be justified in removing her.

Affleck also suggested Leggett was cherry-picking incidents that did not involve blockades aimed at stopping work at the Burnaby Terminal and the Westridge Marine Terminal.

Leggett replied that Trans Mountain has done the same and also focused on blockades rather than inconvenience, which he says does not justify an injunction.

Frances Mahon, a lawyer who represents the second defendant, argued that Camp Cloud, one of the structures targeted by Trans Mountain, hosts a sacred fire and is of religious significance to the Coast Salish people and is also a place for storytelling.

“Camp Cloud and Watch House are examples of expressive content that are protected by freedom of expression in Canada,” she said, adding a hereditary chief of the Squamish Nation gave consent for Camp Cloud to occupy land that is across the street from the Burnaby Terminal and near a trail.

While a lawyer for Trans Mountain has argued Camp Cloud is a meeting place for protesters intent on blocking operations, there is no evidence of that, Mahon said.

Protests at the two work sites began in November, and activists have vowed to continue opposing the $7.4-billion project that would go from Edmonton to Burnaby.

with files from Camille Bains, The Canadian Press

As a retired teacher in Leeds

As a retired teacher in Leeds County, Ontario, I can do my bit for the environment at this time of year by spending all day pruning the many acres of young black walnut trees I grow on the property. But land is plentiful here. Were I to find myself in Vancouver, I suppose I'd likely spend my days at the Kinder Morgan site with the other well-meaning retirees. There is so little flat ground out there. In Ontario they'd be making maple syrup at this time of year.

Lawyers talk to lawyers. Meanwhile, the people are opposed to this insane project. We all know that the extraction and burning of fossil fuels must end. This company and its shareholders must be held accountable. The judge knows this.

With Respect,
I am opposed to the shipping of oil products, including dilbit, from the West Coast of Canada. Firstly, the planetary boundary for Greenhouse Gases is dangerously close to being reached. This is catastrophic for everyone on earth. Yes, its that big!

Secondly, the danger of contamination to the environment is too great with any form of shipping. As climatic conditions become more unstable and storms become stronger and unpredictable, no guarantee will suffice to protect the environment from the disaster of a sinking ship pushed up on the rocks by powerful waves somewhere on our coast. We have seen vessels lose power at sea off the coast of Haida Gui, and that was in calm weather.

Lastly, the principles of Polluter Pay and of Prevention as First Policy mean that the corporations and shareholders of those corporations must be held accountable legally and financially until all contamination and consequent effects are cleared to the satisfaction of the affected. Compensation must be immediate and sufficient.