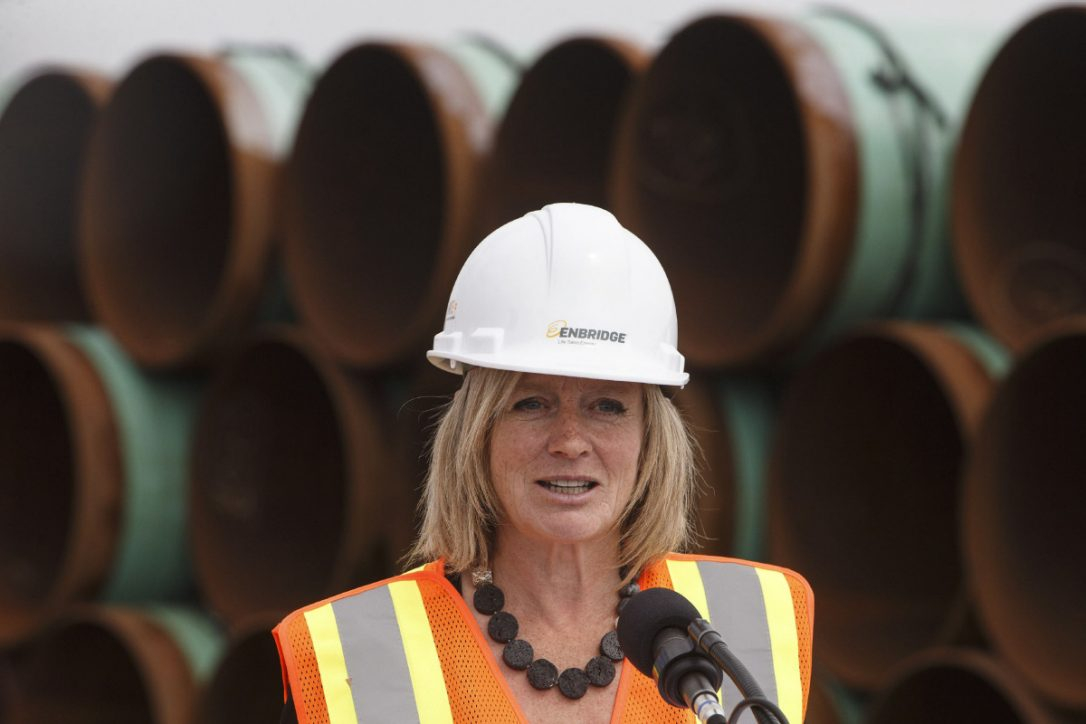 Her other cap has some big holes in it, argues Barry Saxifrage. Alberta Premier Rachel Notley Aug. 10, 2017. Photo by Jason Franson / The Canadian Press)
Previous story
Next story

Prime Minister Trudeau says Alberta's 100 million tonne "absolute cap on oilsands emissions" was a key factor in approving Kinder Morgan's Trans Mountain pipeline expansion. But a close look at this "cap" reveals it has loopholes you could fit all of Nova Scotia's emissions through, or even entire nations like Costa Rica or Nicaragua.

There are six loopholes, five of which have no maximum limit. When it comes to oilsands climate pollution, everything is supersized it seems, even the loopholes.

The loopholes are projected to exempt sixteen million tonnes of oilsands climate pollution (16 MtCO2) by 2030. That's the year Canada needs to meet our Paris Accord climate target. These loophole exemptions are expected to allow the oilsands to pollute at least 115 MtCO2 by then, according to the latest projections from Canada's "National Communication #7" report to the United Nations.

Environment and Climate Change Canada provided a breakdown of these exemptions along with the emissions projected for each in 2030.

EXEMPT — Electricity co-generation: There is no maximum limit on how much climate pollution can be exempted in this category. At this point Environment Canada projects that co-gen emissions will rise to 6 MtCO2 by 2030.

EXEMPT — Primary oil production: "Primary oil sands … is the production of heavy oil that is in the presence of sand (but) does not initially use heat to free the heavy oil from the deposit," according to Environment Canada. Currently, 4 MtCO2 are projected by 2030. Like the previous loophole, this exemption has no upper limit.

EXEMPT — Upgraders. Climate pollution from any new or expanded upgraders will be exempted up to a limit of 10 MtCO2. Currently, 4 MtCO2 are projected to be exempt in 2030. However, this could rise significantly if Alberta is successful in its recent plan to spend $1 billion to jump-start "two to five" new upgraders.

EXEMPT — All emissions in Saskatchewan. Unlimited exemption for oilsands climate pollution that gets emitted on the Saskatchewan side of the border. Environment Canada projects 2 MtCO2 by 2030.

EXEMPT — Enhanced Recovery. This is an unlimited pollution exemption for any projects that get placed into an "enhanced recovery" category. As Environment Canada noted: "Final definitions of exclusions under the Oil Sands Emission Limit Act are still in development." The Alberta government still gets to decide what it means and which projects fit into it.

The 'hard cap' on oilsands pollution has loopholes you could fit all of Nova Scotia's emissions through, or even entire nations like Costa Rica or Nicaragua.

EXEMPT — Experimental Schemes. Another unlimited exemption. This time for any projects placed into an "experimental schemes" category. This also hasn't been officially defined yet. Will Suncor Energy's new fleet of driverless trucks qualify for an "experimental" exemption? Or how about Cenovus Energy's hoped for "next-generation SAGD projects" without any workers? Again, TBD.

These six holes were legislated into the 'cap' to allow the oilsands industry to pollute far beyond the advertised 100 MtCO2. How much more hasn't been decided yet and is at the discretion of the Alberta government.

What the 'cap' means for the rest of Canada

As I've covered in recent articles, the primary threat to our nation's climate commitments is surging pollution from Alberta's oilsands industry. And the cap allows this trend to keep accelerating far past the breaking point.

To illustrate, here's a chart that shows the percentage of Canada's climate targets eaten up by climate pollution from Alberta's oilsands industry.

As you can quickly see, the cap allows oilsands pollution to rise to nearly a quarter of our nation's climate target by 2030. And the oilsands' share rises quickly from there, hitting 78 per cent by 2050.

All while staying under the "cap."

But we won't have to wait for 2050 for the train wreck. That's because the Paris Accord requires all nations to set increasingly ambitious targets every five years. To illustrate what that might look like for Canada, my chart shows straight-line targets for 2035 and 2040. In this scenario, the cap allows the oilsands industry to eat up a third of our national target within five years of kicking in. Within ten years of kicking in, the "capped" oilsands demand half.

The chart also lets you see how wildly out of balance the oilsands share of Canada's climate budget is to the share of the nation's jobs and GDP they produce.

Does any of this look to you like a world-class climate solution for Canada?

Another way to visualize the explosive increase in oilsands climate pollution permitted under the cap, is to compare pollution from other nations. Or even, as it turns out, entire regions. As my chart below shows, Central America's greenhouse gas emissions are a good comparison to illustrate the speed and scale of the oilsands emissions surge.

Back in 1990, when the climate threat was becoming clear, the oilsands industry emitted roughly the same amount as Nicaragua: 15 MtCO2 per year.

By 2005, just fifteen years later, the oilsands had more than doubled emissions to 35 MtCO2. That was equivalent to adding all of Honduras' climate pollution.

2005 is also the base year for Canada's international climate pledges. Both the Harper and Trudeau governments pledged that Canada would significantly lower our emissions below their 2005 level.

Instead of lowering their climate pollution, the oilsands industry accelerated it, adding the equivalent of:

But the oilsands aren't stopping there. As we saw above, the cap allows oilsands climate pollution to grow up to at least 115 MtCO2 by 2030. At that point their pollution will rival the combined emissions from the entire Central American region, home to 47 million people. Impressive for a single Albertan industry with a workforce one thousand times smaller than that.

That's a lot of climate pollution from the oilsands. But the even bigger threat, as illustrated above, is how fast it keeps increasing. Indeed, during Canada's Paris Accord target years the oilsands industry is on track to increase emissions by 80 MtCO2 instead of decreasing them the needed 10 MtCO2 (30 per cent below 2005). To meet our national target, the rest of Canada would need to cut an extra 90 MtCO2 just to make up for the oilsands.

So far, the other Canadian provinces aren't signing up for this additional task equivalent to decarbonizing most of Central America — just so the oilsands industry doesn't have to cut emissions like everyone else.

Alberta's leaky cap continues the pattern of allowing the oilsands industry's to keep expanding climate pollution at a pace and scale that forces generational climate failure on the rest of Canada.

Even though most climate

Even though most climate justice activists have no trouble accepting this excellent analysis, it's revelations certainly paint Alberta in a disgusting position! So how do the tar sands corporations allow Alberta to pollute "in the national interest", while B. C.'s aspirations for keeping the environment clean goes against such "interest"?!

The corruption, malfeasance and greed of psyco/sociopaths in the cynical capitalist system where everything is for sale, nature is inconvenient, every other species merely decorative and the only thing that matters is money. Those with the most $$$ (regardless of how much blood it's soaked in) are worshipped by those we elect, who are of the same ilk and exploit their offices for their own benefit. Not today, as there are "rules", but board seats, cushy jobs, stocks and other goodies await their ouster from "public service".

What others consider to be sacred and more important than everything else - landscapes of lush plants bursting with vigour and thriving wildlife, pristine waters teeming with healthy inhabitants, etc - is worthless under this system unless it can be exploited to make somebody rich. Governments break laws to facilitate industry but our only recourse is passing the hat to raise $$ to beg judges appointed by those same governments to help us, while government fights back using our tax $. The fish rots from the head.