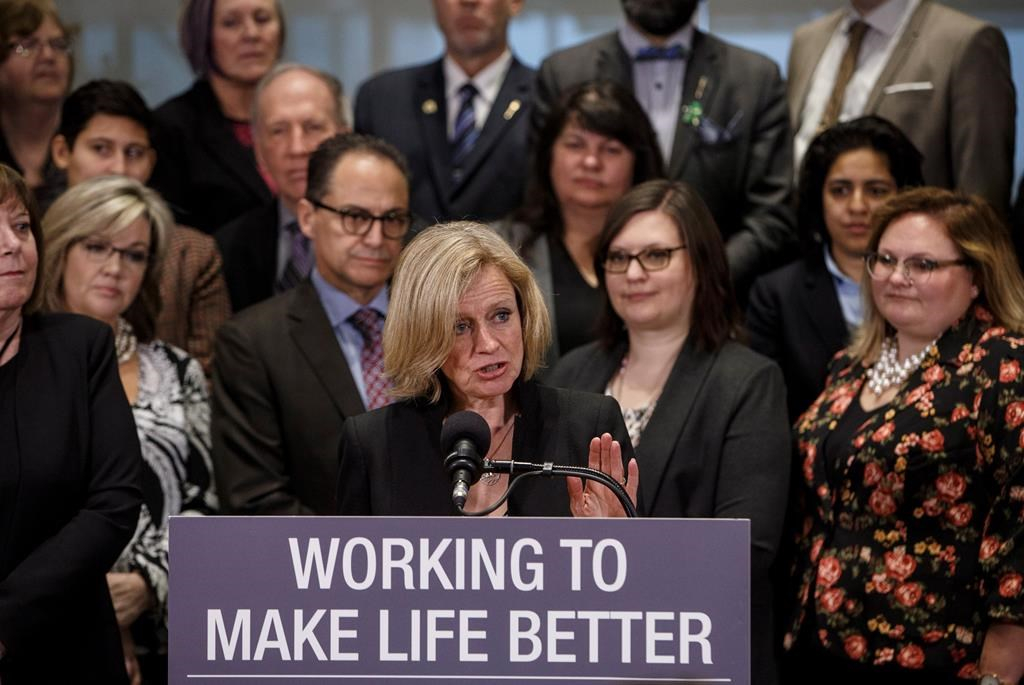 Flanked by members of her caucus, Alberta Premier Rachel Notley speaks about new legislation that was tabled to punish B.C.'s economy. Photo by The Canadian Press
Previous story

The Alberta government has introduced legislation that would give the energy minister power to restrict the flow of oil, gasoline and natural gas leaving the province.

Once passed, Marg McCuaig-Boyd would be able to direct truckers, pipeline companies and rail operators on how much product could be shipped and when. Violators would face fines of up to $1 million a day for individuals and $10 million a day for corporations.

"The bill sends a clear message: we will use every tool at our disposal to defend Albertans (and) to defend our resources," Notley said Monday before introducing the proposed law in the legislature.

Existing pipelines are near capacity and the bill aims to give Alberta the power to adjust what is shipped and where it goes to ensure maximum profitability, she said.

Alberta is locked in a dispute with British Columbia over the Trans Mountain pipeline. An expansion to the West Coast has been approved by the federal government, but B.C. is fighting it in the courts.

Notley said the proposed legislation is not punishing B.C. for the Kinder Morgan project's delay, which she says costs Canada $40 million a day in lost revenue due to market bottlenecks and higher shipping fees.

But she said Alberta is "very committed to putting pressure on B.C. to come around and focus on what this pipeline actually means."

"I'm not counting on Alberta taking extreme or unlawful actions, but if they do we're prepared to defend British Columbians' interests with every legal means available and in the courts," he said.

Heyman said the government would consider court action if the legislation were to cause gasoline prices in B.C. to spike.

"If they do that, we'll examine exactly what legislation they bring in and if we believe it's flawed ... we'll certainly take them to court."

The B.C. attorney general, David Eby, said B.C. is prepared to sue Alberta if the law punishes his province.

"We know, as I'm sure they know, that the constitution forbids discrimination around energy between provinces," Eby said.

Liberal legislature member David Swann said Alberta must use the power carefully because it could hurt the province's economy and divide the country.

About 80,000 barrels a day of refined fuels go to British Columbia.

Much of B.C.'s energy from Alberta comes from shipments on the existing Trans Mountain line from Alberta to Burnaby, B.C. Reducing oil flows could lead to immediate gas price spikes at the pumps, along with other higher costs.

B.C. Premier John Horgan has been fighting the expansion, even though the federal government approved the $7.4-billion project in November 2016. Horgan has said there are still concerns relating to oil spills and protecting B.C.'s coastline.

The Kinder Morgan project would triple the amount of oil shipped on the current line, but has faced repeated court challenges and permit delays.

Kinder Morgan announced earlier this month that it is pulling back on spending for the project and has given Prime Minister Justin Trudeau's government until May 31 to give a clear signal that the project will proceed.

Trudeau met with Notley and Horgan on Sunday and said Ottawa has joined negotiations with Alberta to buy a stake in Trans Mountain, if necessary, to see that it gets built.

Notley suggested May 31 will be key if the viability of the pipeline project is still in question.

"That might be the point at which we're going to have to be a lot more strategic around what products get shipped to what markets by what means," she said.

Alberta will work with resource companies as things develop, she said.

"There will be no surprises."

Alberta is building on precedent.

In 1981, under then-premier Peter Lougheed, Alberta reduced oil shipments to Central Canada during a fight with the federal government over oil pricing and resource ownership.

The result was a new agreement with Prime Minister Pierre Trudeau that allowed Alberta to retain ownership of its resources along with a more amenable pricing schedule.

WA WA WA. Alberta is such a

WA WA WA. Alberta is such a cry baby.
Notley will be crying over spilled oil sooner than later.
BC will be mopping up the oil with her soiled tissues.
What a preventable environmental travesty.

It is an interesting

It is an interesting contradiction with Ms. Notley claiming that on constitutional grounds B.C. can not restrict or manage the proposed increase in theflow of dilbit through it’s Province yet she can restrict the existing flow through the pipeline on pain of major fines,

Rachel Notley's climate plan revealed at last -- drive up the price of gasoline in BC so maybe its drivers won't drive so much. While Alberta triples its disastrous tarsands production, blowing the lid off two degrees forever. And this from the NDP?