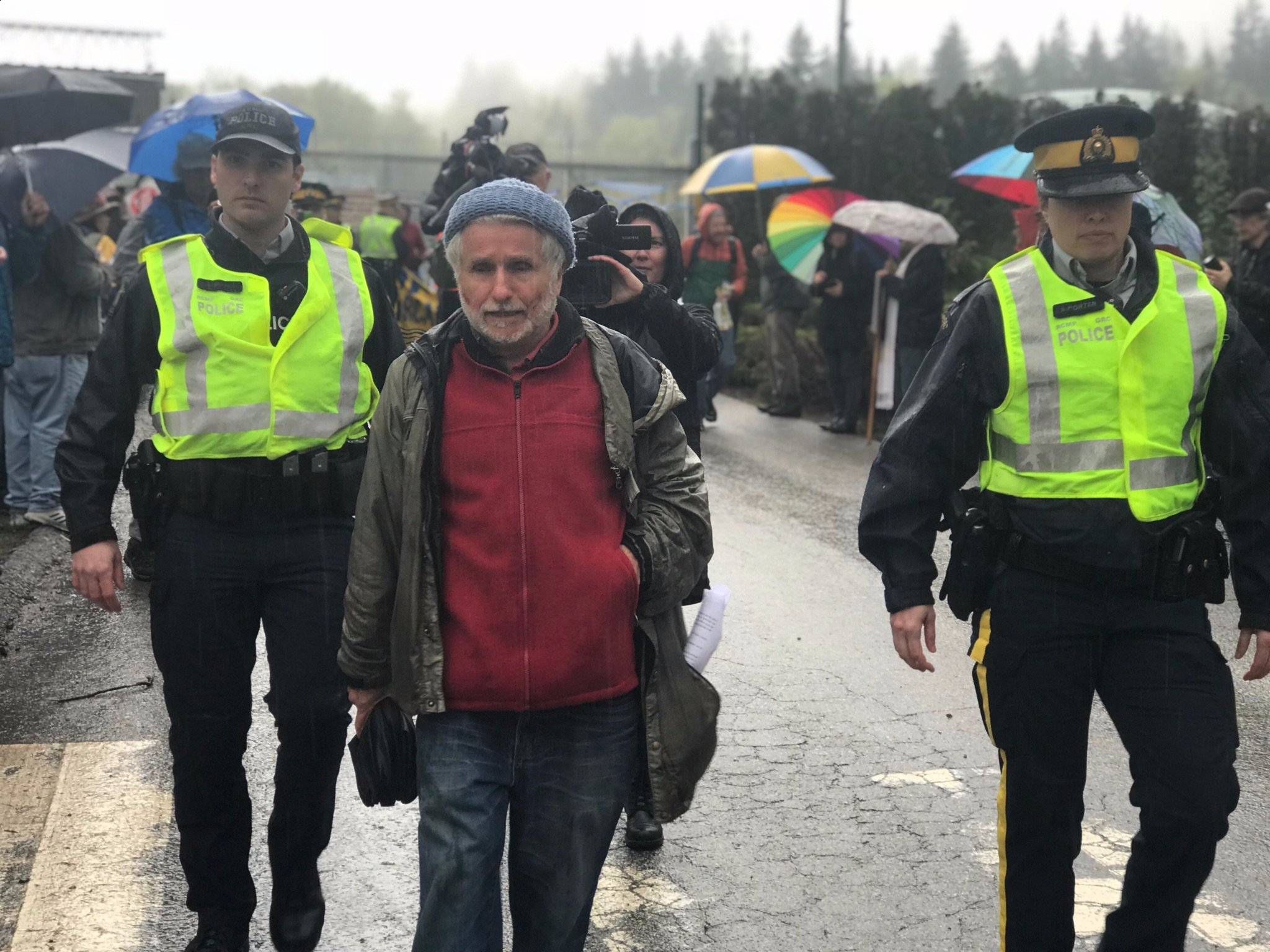 Barry Morris, a minister from the United Church of Canada, is among a group of faith leaders arrested for allegedly violating an injunction protecting a Kinder Morgan Trans Mountain Burnaby construction site on April 28, 2018. Photo by Protect the Inlet
Previous story
Next story

Editor's note: This article was originally published on April 30, 2018.

A lawyer for the Tsleil-Waututh Nation on the west coast, Scott Smith, has cited this reporting in a legal letter sent on April 26 to the Federal Court of Appeal that opens the door do some new legal maneuvering.

Public servants say that a high-ranking federal official instructed them to find a way to get the project approved as the government pursued its consultations with First Nations.

This is significant because the government has a legal duty under Canada's Constitution to act in good faith and meaningfully consult First Nations about major decisions that affect their territory and their rights. Any evidence that they had made up their mind before they had actually consulted Indigenous people could undo the entire project approval.

Kinder Morgan, the Texas-based energy company that operates the existing Trans Mountain pipeline, lobbied officials in the federal government more than three dozen times in 2016 before the expansion project was approved.

While a lot of media coverage has focused on the political battle between two NDP provincial premiers — Rachel Notley in Alberta and John Horgan in British Columbia — over the latter's efforts to restrict the volume of heavy oil transported through the province, the emerging legal battle could have deeper implications for the future of the project.

In his April 26 legal letter, Smith spelled out initial arguments designed to persuade the court to accept new evidence in a case that is challenging the federal government's approval of the Trans Mountain expansion.

But this request is unusual given that the case was heard about six months ago and the court was already deliberating on its decision.

A lawyer representing Trans Mountain responded the next day with a letter that warned this maneuver could cause "significant" delay. The company has already threatened to pull out by May 31, due to uncertainty about the impact of opposition to the project in B.C.

But the court battle could be part of what brings more facts and evidence to light, beyond what we already know.

Here is a sample of some of the relevant evidence released through access to information legislation and other public information gathered by National Observer over the past two years.

When asked for documents related to this lobbying activity, the federal department released a Jan. 14, 2016 memo through access to information legislation that reveals the company's Canadian president, Ian Anderson, had requested a phone call, and was likely interested in speaking about the rules for the federal review of the Trans Mountain expansion project.

Following the memo and the second reported lobbying activity from Jan. 18, high-ranking officials within the department distributed an email that proposed to speed up the federal review of the project in order to prevent Kinder Morgan from abandoning its project.

You can find the memo over here:

The federal environment department has long had concerns about the risks of the Trans Mountain expansion project. In January 2016, the department warned that there were gaps in science that could put public health and safety at risk if the oil expansion project were to be approved.

The department submitted these warnings to a federal panel from the National Energy Board that was reviewing Trans Mountain, but the concerns were rejected when the energy regulator recommended approving the project a few months later. The federal government also accepted the NEB's assessment, but agreed to increase funding for relevant research.

Here is the full argument from January 2016:

A few months after Environment and Climate Change Canada submitted its arguments, officials at Transport Canada sent some internal correspondence in April and May 2016 that indicated they agreed about the need to fill some gaps to stave off an emergency.

A briefing note prepared at that time for the federal Transport Department's newly-minted deputy minister, Michael Keenan, suggested that he ask Kinder Morgan whether the company would be prepared to pay to address up to 11 "marine safety gaps" that were flagged by the B.C. government, led at the time by former premier Christy Clark.

Transport Canada said it agreed with most of the concerns raised by B.C. and believed that they could be addressed as part of a comprehensive national plan.

Here are the Transport Canada files:

Officials from Natural Resources Canada organized a meeting involving five other departments, Environment and Climate Change Canada, Fisheries and Oceans, Indigenous and Northern Affairs, Transport Canada and Health Canada, in the boardroom of the head office of the Vancouver Fraser Port Authority on Oct. 27, 2016. This would be the meeting in which officials say that a high-ranking official, then-associate deputy minister Erin O'Gorman from the federal Major Projects Management Office, would instruct them to find a "legally-sound" way for Trudeau's cabinet to say 'yes' to the Kinder Morgan project.

Leading up to that meeting, an internal email from Oct. 26, 2016 revealed that public servants involved in the discussions had raised "some concerns" about the "process towards decision moving fast."

More than a dozen public servants from the six different departments and one agency, the Vancouver Fraser Port Authority, were invited to the special Oct. 27, 2016 meeting, some four weeks before the government confirmed it had approved the project.

It was in that meeting that some public servants alleged that a high-ranking officials instructed them to find a "legally-sound" way to approve the project.

One department has confirmed that it had records from an employee at the meeting and it released those notes in response to an access to information request.

The notes do not directly confirm that these instructions were given, although they do include a reference to some of these words, as well as to a previous court case involving the Gitxaala Nation. This First Nation challenged the federal approval of the Enbridge Northern Gateway pipeline and won its case after the Federal Court of Appeal ruled that the former Harper government had failed in its duty to consult First Nations about its decision.

You can find these notes below:

Over the next few weeks, internal memos at Natural Resources Canada in November 2016 reveal hints about the pressure that public servants were under to approve the Trans Mountain project. These memos also document criticism from First Nations who argued that consultations were "paternalistic" and "inadequate."

This collection of memos was heavily censored, prior to release through Canada's Access to Information Act, in January 2018, more than a year after National Observer requested them. The legislation requires governments to release public records within 30 days upon request from someone who pas a $5 fee, unless it has a valid reason to refuse.

Here are the memos:

In October 2017, National Observer's Carl Meyer reported on internal emails released through access to information that revealed how public servants reacted to a letter sent to Prime Minister Justin Trudeau by U.S. and Canadian scientists on Nov. 21, 2016.

The scientific paper triggered immediate denials in a flurry of emails sent within government, just a few days before the Trudeau government approved the Trans Mountain project.

You can find those files below:

One day before the Trudeau government approved the Trans Mountain expansion project, Tsleil-Waututh Chief Maureen Thomas handed over four reports to Natural Resources Minister Jim Carr, requesting that he review them before making a final decision.

These records show that Carr's office passed on the reports, totalling 164 pages, to the federal Natural Resources Department. Public servants spent less than a day reviewing them before deciding that there was nothing they hadn't already considered.

You can find the internal assessment of those reports over right below:

You can stay up-to-date on the latest developments with Canada's most comprehensive coverage of this unfolding saga with our special report over here.

This journalism took more than a year of work to parse through documents and reach out to sources in different cities across Canada. It cost a few hundred dollars to request and retrieve the relevant documents. It also cost tens of thousands of dollars to cover our extensive research and reporting expenses associated with this investigation.

All of it is funded by readers like you. If you want to see more of it, you can subscribe over here or make a donation to target additional coverage of Trans Mountain over here.