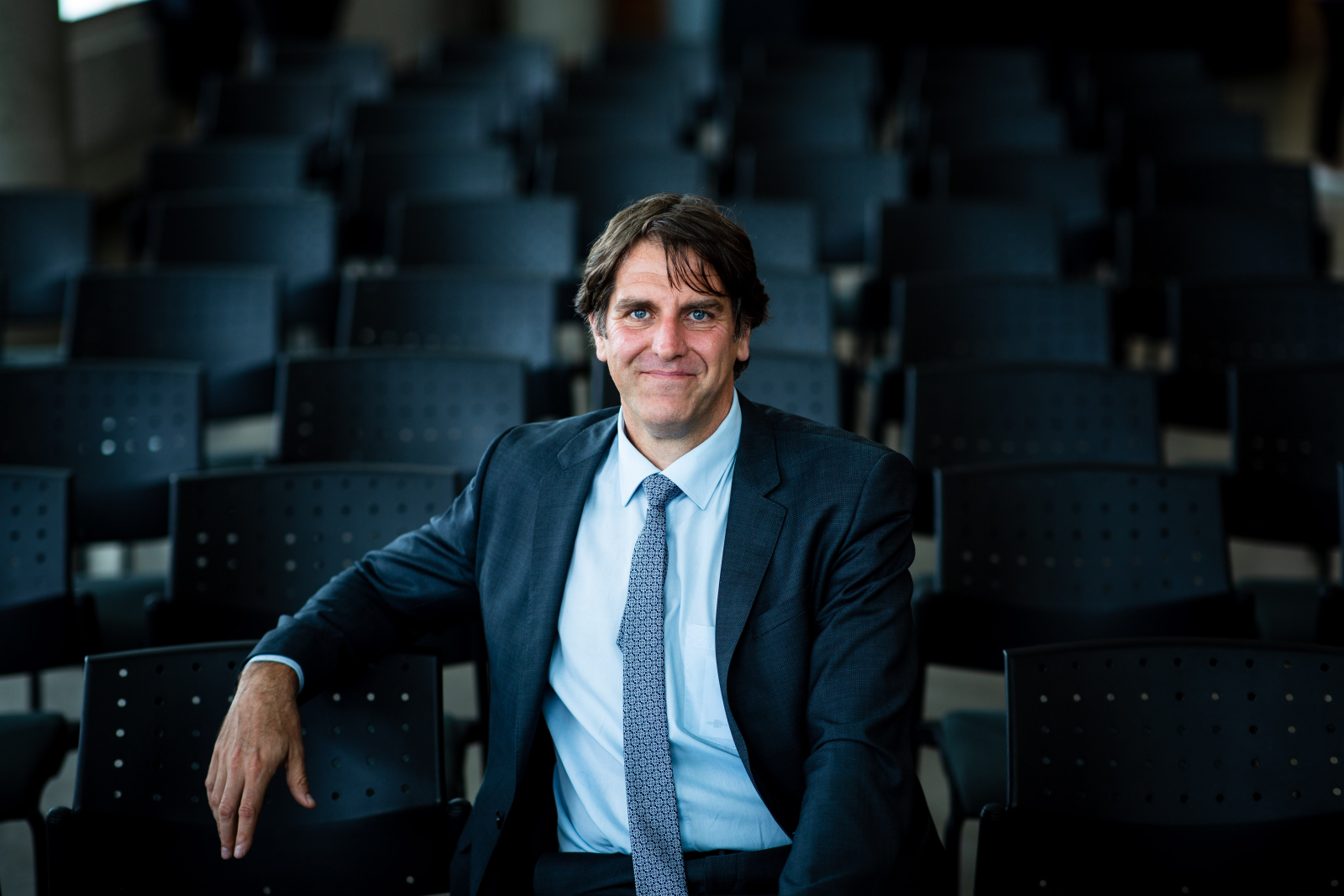 For Germany it's coal. For Canada, it's oil and gas. Both are among the dozens of countries who will try to work out a global climate change "rulebook" by the end of the year.

The two nations are in similar positions, trying to decarbonize while also looking out for workers and communities in fossil fuel industries. Andreas Löschel, chair of the independent Expert Commission monitoring the German government’s low-carbon energy transition policy, says Canada plays an important role as a resource-rich economy trying to usher in a low-carbon future.

"(Canada) plays a really important role in showing that there are possibilities for this type of transformation," said Löschel, in an interview on May 22. “Germany is resource-rich in coal, and we have the same situation where we have to give up the use of our resources, because it’s not compatible using them and at the same time achieving our (climate) targets."

He said it was “not possible to use fossil fuels anymore — only a very small fraction, and that will be devoted, probably, to some industrial processes." The electricity, heating and cooling and most of the transportation sector, he added, "has to be carbon-free.”

Löschel said the upcoming UN climate talks in Poland in December, COP 24, will be tackling a difficult topic: figuring out the specific rules around implementing the Paris climate agreement, what’s being called the Paris rulebook.

“This bottom-up approach made it possible for everyone to agree on the general framework, but of course it has not delivered the (carbon pollution) reductions that we actually have as an overarching goal. Now we are in a situation where the individual countries have to beef up their commitments.”

That’s the difficult part, and what ended up killing the Kyoto Protocol, he argued. “There, we tried top-down, to develop a distribution of burden, taking into account this overarching goal, and it was not possible.”

Creating the Paris rulebook is something Environment and Climate Change Minister Catherine McKenna tried to hammer home in a speech last week at a summit of women climate leaders near Ottawa.

“We need a successful COP. It is going to be very hard this year,” McKenna told the assembled crowd at Willson House in Gatineau Park. “We need to land the rulebook...I need you to push governments to be ambitious. We need to land this, this year.”

The low-carbon transition is particularly fraught for Canada and Germany at this moment, as both are expected to miss their 2020 carbon pollution reduction targets.

German politicians agreed to drop that goal earlier this year, while in Canada, a joint investigation by provincial and federal auditors general concluded in March that Canada was not expected to meet its target of cutting emissions by 17 per cent by that year.

The auditors general also concluded that meeting Canada’s 2030 target of cutting carbon pollution 30 per cent below 2005 levels will require “substantial effort and actions beyond those currently planned or in place.”

Germany will also require substantial effort to meet its longer-term target of becoming carbon-neutral by 2050, said Löschel. “This is really something that does not come easily as well in Germany,” he said. “We’ve seen a stagnation of emissions in the last few years, so we really have to think about how to reduce emissions quickly.”

In Germany’s case, that means cutting coal power, the single-largest source of carbon pollution there according to Berlin-based Clean Energy Wire. It will have to phase out coal-fired power plants if it intends to become carbon-neutral in just over three decades.

It’s a situation faced the world over: based on peer-reviewed evidence, the International Energy Agency, an intergovernmental organization, has concluded that "no more than one-third of proven reserves of fossil fuels can be consumed prior to 2050" in order to avoid a two degrees Celsius increase in average global temperatures, which will greatly accelerate climate change’s destructive effects.

Germany is set to launch a task force on phasing out coal power in the coming weeks, that will bring together industry representatives and labour leaders to hammer out a strategy.

That sounds similar to Canada’s “just transition” task force, announced April 25, of leaders from the labour and environmental movements as well as industry who are to work out a plan to phase out coal nationwide.

‘It’s not going to happen overnight’

In Canada, the sector with the largest carbon pollution emissions is not coal, but oil and gas, which constituted more than a quarter of emissions in 2015, according to the federal government.

Oil and gas is also mostly responsible for the increase of Canada’s overall carbon emissions between 1990 and 2015, thanks to a 76-per-cent increase from the sector, much higher than the 42-per-cent increase in the transportation sector.

As with the coal industry in Germany, phasing out emissions from the oil and gas industry in Canada is sensitive, especially for the Trudeau government, as it has approved two major fossil fuel pipeline projects that would allow for oilpatch expansion as part of an overall national climate change strategy.

Climate change policy experts say a low-carbon future will necessarily mean fewer jobs in oil and gas in Canada, meaning that sector needs a “just transition” plan of its own for the tens of thousands of people employed directly or indirectly because of the oilsands — the world's third-largest reserves of crude oil after Saudi Arabia and Venezuela.

Prime Minister Justin Trudeau acknowledged this in January 2017, when he said Canada needs to “manage the transition off of our dependence on fossil fuels.” But those comments sparked anger in Alberta.

Trudeau's government has lately lobbied heavily for the Trans Mountain pipeline expansion, and recently said it would put up public money to back the project against financial losses.

National Observer asked McKenna at her climate summit last week why her government wouldn’t start the process for an oil and gas "just transition" plan now.

“When you look at, for example, what Alberta’s done — Alberta’s looking at how it diversifies its economy, the province is already doing that,” the minister responded.

She pointed to Alberta’s lowest-priced renewable procurement in Canadian history — the results of the first round of its Renewable Electricity Program in December, which fetched a 20-year average price of 3.7 cents per kilowatt-hour — as well as provincial investments in clean technology.

“Transitions take time. People are still driving cars that use oil and gas. They (transitions) take decades,” she said.

Hunting for the elusive single number

Germany’s policies state that the public must be supplied with electricity that is guaranteed secure, inexpensive and environmentally sound. Löschel said that meant looking at indicators for supply and affordability, such as energy prices, and how those prices impact companies in Germany.

He tries to scrutinize analyses by asking, “is it really robust, in terms of using a cutting-edge type of research approach? Are they missing something? How reliable are the numbers?”

The challenge, he said, is to distinguish between significant causality and what are just exceptions to the rule. With climate change and economics, that’s not always easy.

“That’s really the bottom line,” he said. “Can some developments be attributed to some specific element of policy? That is something, if we look at indicators, we always have to be aware we’re just observing one snapshot — not really being sure how this was initiated.”

In Canada, the question of hard numbers has been raised by the opposition Conservative Party, which has been trying to get the government to show how much Canadians can expect to pay for gasoline, heat and groceries after its carbon pricing regime kicks into gear.

Conservative finance critic Pierre Poilievre has compared the situation to buying a used car without knowing the price: “You make the deal now, you agree to make the payment today, and seven to eight months down the road, we’ll tell you what came out of your bank account.”

The Trudeau Liberals often respond with a different set of numbers — insurance claims that are projected to skyrocket as a result of climate change, to as much as $43 billion a year by 2050. The implication is that any costs from carbon pricing would be dwarfed by the cost of inaction.

Löschel said it’s often difficult to provide a single number as an answer to policy questions, even if that’s what lawmakers are looking for. “What we can do is, try to see what we can learn from this analysis and provide robust insights — without the one number,” he said.

“We always try to look ahead, to analyze, as good as we can, what are the economic consequences of these transformation pathways...how can we achieve this with the least economic cost, or the most economic benefit.”

Where the investment goes, so

Where the investment goes, so goes the productivity. Pouring money into oil and gas and pipelines will certainly not lead us to a low carbon future. Investment needs to go into clean renewable energy and electrifying trucks, cars and home/business heating infrastructure. It's actually pretty simple if you just put your mind to it. We're doing it already and we just need to do it a lot more and fast.