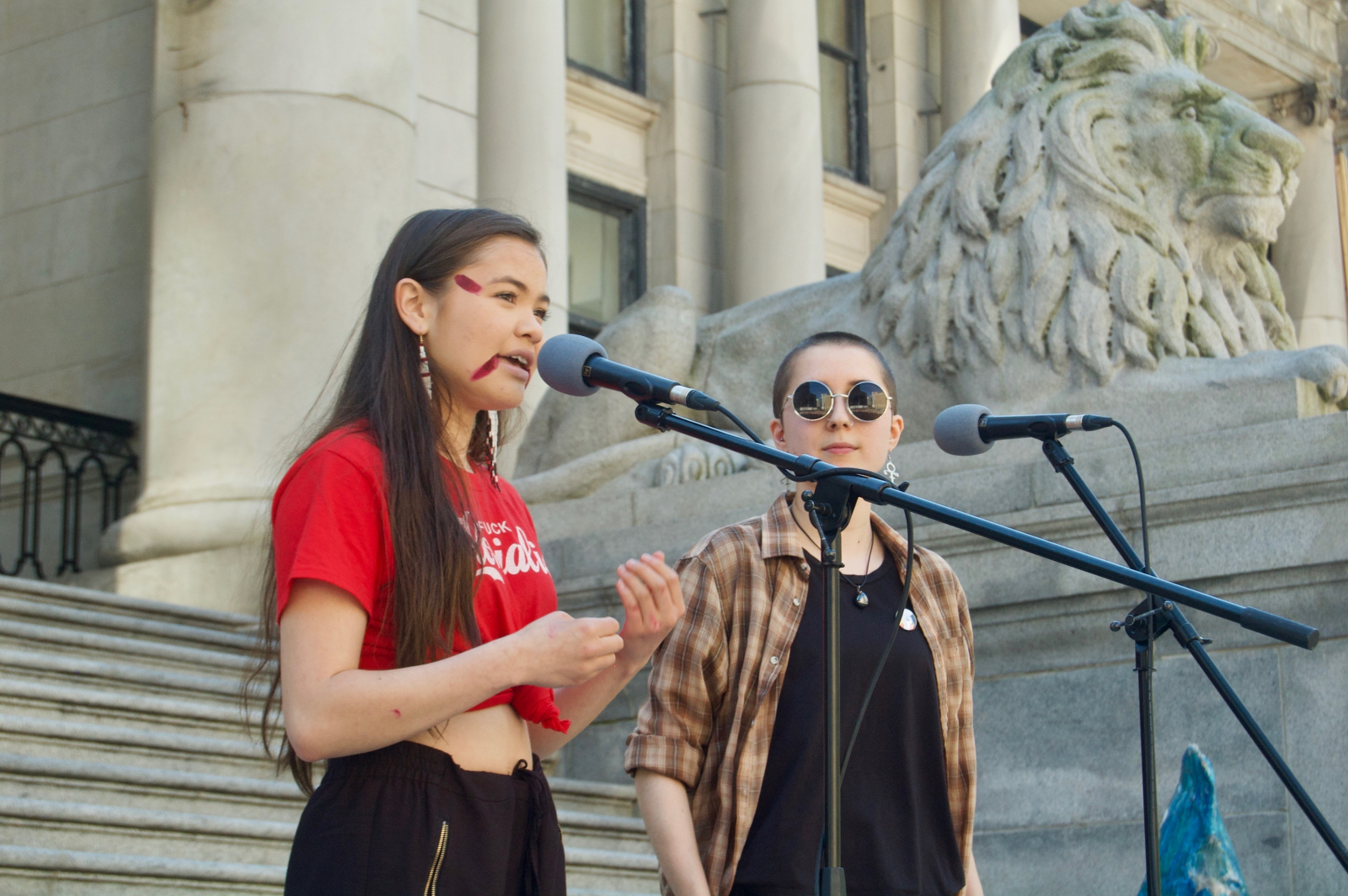 Ta’kaiya Blaney, 17, and Eden Reimer, 18, speak outside the Vancouver Art Gallery on May 23, 2018. Photo by Dylan Sunshine Waisman
Previous story
Next story

Nearly 200 students in Vancouver and other B.C. communities walked out of their high schools on Wednesday to protest the expansion of Kinder Morgan’s Trans Mountain pipeline.

Students stood up in their classrooms at 2 p.m., gave speeches encouraging other students to join them, and headed to the downtown Vancouver Art Gallery.

The rally was organized by Ta’kaiya Blaney, a 17-year-old Indigenous rights activist from Sliammon, a Coast Salish community about 160 kilometres from Vancouver, and Eden Reimer, 18, a self-described “settler” (non-Indigenous person) born and raised in Vancouver. Both teens said they oppose the Trans Mountain pipeline expansion, which would triple shipping capacity to 890,000 barrels of petroleum products, including diluted bitumen, from Alberta to a terminal in the Vancouver-area community of Burnaby, B.C..

The objective, Blaney explained, was to demonstrate “that youth value our lands, livelihood and future, over a pipeline that proceeds without Indigenous consent, in disregard of Canada’s climate change commitments and threatens our climate future.”

Reimer accused Prime Minister Justin Trudeau of hypocrisy as he had taken the title of youth minister while supporting a project that would hurt the environment and the future for young people. The demonstrators "will not allow him to pass forward this...project that directly contradicts what he has promised to the youth of this country.”

The pair said they drew inspiration from the young people in Parkland, Florida who organized the “March for our Lives” school walkout for gun reform in the United States.

“I hadn’t actually encountered a walkout like that before, so seeing that all across the country ...was eye opening,” said Reimer.

Blaney said she was inspired by the scale of their youth-led movement. “It provided a great example of ways youth could engage with these issues and take action.”

"We’re very optimistic, we’re very ambitious, we’re dreamers and we bring a lot of ideas the table." Nearly 200 students around Vancouver walked out of their high schools to protest the #TransMountain #pipeline. #youthwalkout #kindermorgan #cdnpoli

Blaney, who has spoken out on environmental issues since she was nine years old, said she was motivated by a desire "to ensure that the following seven generations have access to clean water and healthy air."

Both said they feel young people are often inaccurately labeled as being apathetic and obsessed with social media, when they are in fact engaged with major issues affecting their lives.

“Youth are so much more powerful than I think we’re given credit for," Reimer said. "I think that we really have the potential to make social change especially when that social change is regarding our future.”

“I think that youth also bring an interesting energy to the movement," Blaney added. "We’re very optimistic. We’re very ambitious. We’re dreamers and we bring a lot of ideas the table.”

The two exchanged smiles and giggled, nodding in agreement about the confidence and optimism they share.

The walkout was supported in at least two other communities outside Vancouver.

#Heiltsuk youth stand with our southern relatives against #KinderMorgan. 50+ have walked out of school this morning with their drums, supported by hereditary and elected leadership + community members marching behind them. 💪🏽 pic.twitter.com/jmpWOITsMC

At 10 a.m., youth in the Heiltsuk Nation's traditional territories in northern B.C. held their own school walkout in solidarity.

Jess Housty, an elected councilor with the Heiltsuk Nation, said that over 50 students walked out of class in Bella Bella to protest Kinder Morgan's pipeline expansion. Hereditary and elected leadership, as well as community members, stood with them.

According to the Warrior Up: Walkout Facebook page, over 100 students also walked out of Gulf Islands Secondary School on Salt Spring Island.

Vancouver student Safinaz Saigol described the scene of her walkout at 2 p.m. in her high school art class.

“I was ready to do a speech and speak my mind and tell people why I was walking out,” she said. Her teacher wouldn't let her speak and she said the school's vice principal told her group to “stop soliciting people” as they departed the building in protest. Laughing, she recalled that on their way out, they passed a large Indigenous statue of a raven. She said she found it "absolutely ridiculous" to appropriate symbols of Indigenous culture, but then "not respect it at all in the end when it actually comes down to it.”

By 3 p.m. students from West Vancouver, Vancouver and Richmond in Vancouver marched around the Vancouver Art Gallery.

An array of artists performed, including Ta'kaiya Blaney, JB the First lady, and Musqueam rapper and poet laureate Christi Charles.

Katerina Szulc, a student who walked out of class with about 10 others students from Little Flower Academy, said her group protested because "we believe in education, but we also care about the environment, [and] we care about marginalized people in our country."

"In our generation we acknowledge that we’re on stolen land and what happened in the past was wrong, and we don’t want to see any more mistakes being made," she said. "We left school because we’re standing up for what’s right.”

Watch National Observer's Live Stream of the entire event on Facebook, including interviews with students, organizers, speeches and performances:

If young people get involved

If young people get involved we might yet have a future. KM is just the tip of the heat bomb we're going to have to diffuse though.

P.S. I love the young woman

P.S. I love the young woman who saw through the cultural appropriation of the sacred raven....for a school where staff and administration are counselling that students 'don't solicit'....

Political engagement in the important issues of the day should be a primary goal of a good education. And yes...we do steal from first nations and then expect them to do all the heavy lifting for our environment. It's shameful....and a verbal apology doesn't erase that shame.. Only action in solidarity will do that.