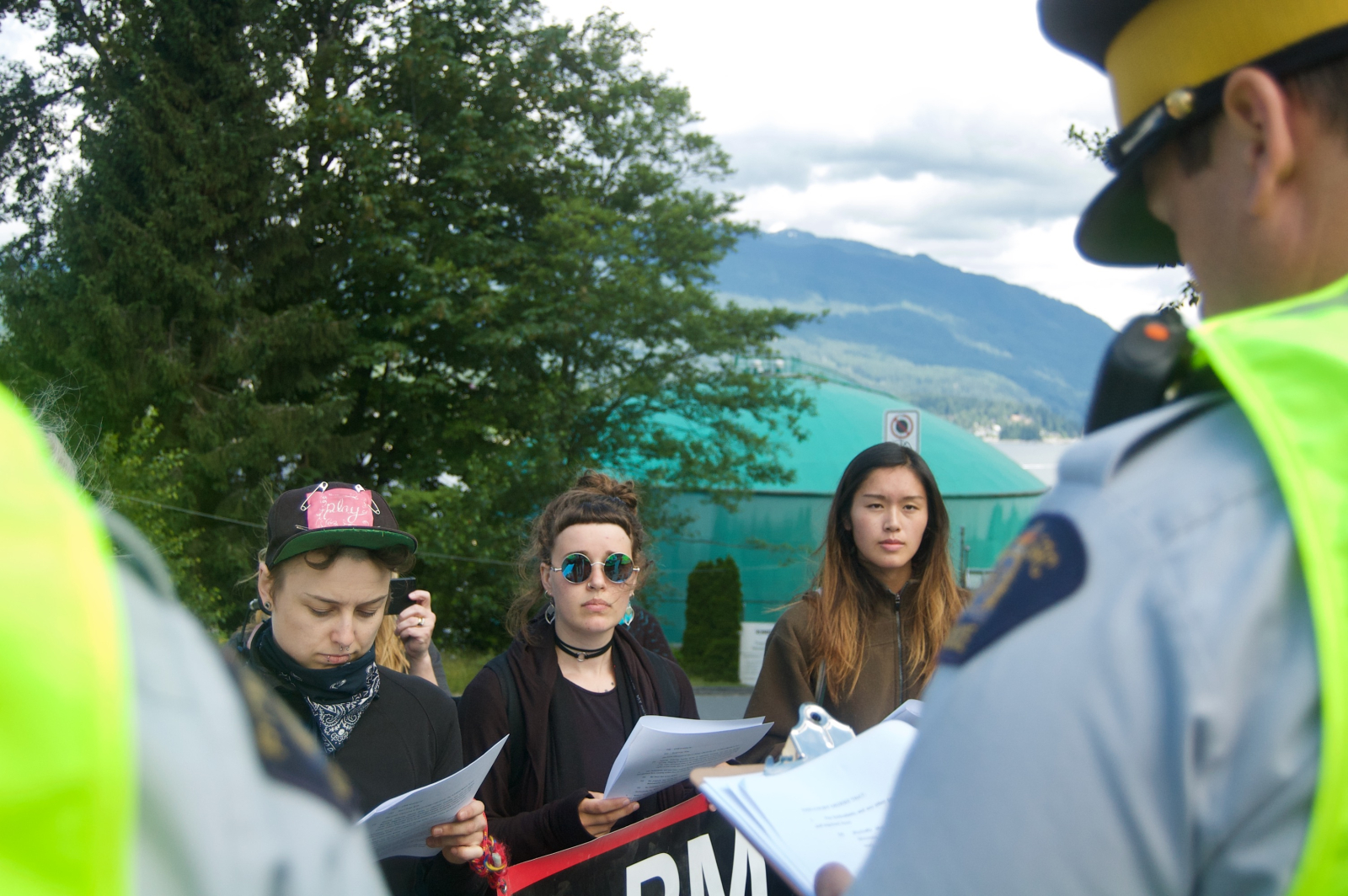 Protesters are read the injunction at the Westridge Marine Terminal on June 11, 2018. Photo by Dylan Sunshine Waisman
Previous story
Next story

No anti-pipeline protesters have been arrested at the Trans Mountain terminal since May 28, when the B.C. Crown Prosecution service said it would escalate the recommended penalties, asking for up to 14 days of jail time for anyone who violates an injunction zone.

Over 200 people have been arrested blockading the pipeline terminal in Burnaby, B.C. since the injunction was ordered by the courts in mid-March.

The injunction was ordered to stop protesters from causing delays to the construction of the Trans Mountain expansion project, which aims to expand an existing pipeline system from Alberta to B.C., tripling the flow of diluted bitumen and other petroleum products up to 890,000 barrels per day.

Since the Canadian government decided to purchase the project on May 29, protests have increased in size, drawing crowds of over a thousand participants and have expanded Canada-wide.

On Monday, pipeline opponents gathered at Kinder Morgan’s marine terminal, in order to protest the construction of a new dock that would allow three tankers to fill up with oil at the same time, according Sven Biggs, one of the organizers from Stand.earth. Approximately 50 protesters were present, with five people blockading the entrance of the construction site. All five stepped aside after the RCMP read them the injunction.

One of the youth protesting at the marine terminal, Calvin Beauchesne, said he was planning on risking arrest Monday, but decided to postpone his decision when he found out it could mean jail time. However, he says he’s not completely deterred, and there are two scenarios he would consider going to jail for, “firstly, if they ramp up construction and start putting the pipes in the ground” and secondly, “if the decision of the court cases aren’t in our favour,” he says, referring to the Federal Court of Appeals cases challenging the legality of the the project's approval by the federal government.

There was a heavy police presence, and a processing tent set up for arrestees, although it remained unused. The blockade disbanded around 1pm, after RCMP read the injunction and asked each individual if they were going to continue blockading. In a slow and respectful fashion, each individual said they would step away, and the process was over within approximately 15 minutes. The interaction was only slightly shorter than the old process, where a 10 minute grace period was given to protesters between the reading of the injunction and their arrest.

Cara Bauck, one of the rally organizers for Protect the Inlet, said that despite no arrests taking place, the blockade and rally was still success, “we just stopped traffic (into the construction site) for 3 hours and held up a bunch of trucks.” Bauck also said that many people have reached out to Protect the Inlet, who say they are ready to risk arrest despite the threat of jail time.

Afterwards, organizers invited the RCMP to join in a peace pipe ceremony with protesters in front of the Kinder Morgan gates. Two uniformed officers chose to take part, smoking the pipe while listening to prayers by Indigenous elders, as the rest of their team stood by.

I find it strange that

I find it strange that protesters face arrest and jail time for blockading the criminal Kinder Morgan terminal, while the BC government is alleged to be trying to stop the pipeline through court proceedings. Has Mr. Horgan had a chat with his Attorney General? Are they at cross purposes??? It would seem that the right thing to do would be ask the prosecutor in this instance to "back off"...unless of course he's working for the Federal government and the dumb as an ironing board LIberals. Strange things going on in the neighborhood...who ya gonna call???

Might be time to flood the jails. I've heard from the Black movement for civil rights in the states that jails were prime organizing centres. And for white liberals....and middle class environmentalists, it might be a great experience. What is that quote by Thoreau ....something to the effect of where a good man (or woman) belongs when bad laws threaten the body politic.? I'm sure we could 'google' it!

But of course, to flood the jails, we'd have to get really organized. Maybe also time to have a talk with 350.org about how they organized the Washington arrests against the Keystone. That was most professionally done...........and jump started the movement against that pipeline across the states.

Looks like one of those classic 'opportunities' to me.

What's the capacity of this

What's the capacity of this jail? I love Utah Phillips' story of how the Wobblies broke a jail. The short version is
"I think my favorite [story] that I like telling, especially during “know your rights” trainings, cause I’m part of the Anarchist Black Cross, is like, back when they were doing their free speech campaigns duringWorldWar I and when they just kept arresting more and more Wobblies and like, soon this entire wing of the jail was like Wobblies on both sides and they were just having a good old time, because what else the fuck can you do when you’re in jail—just have a good goddamn time, and they were like clapping and everyone started stomping, and then everyone started jumping up and down in unison, which as you may or may not know, is like . . . like synchronized movement can break down structures and like the entire floor of the prison just, like, broke and they all like, escaped. I love telling that story."

This is from an interview at https://www.iww.org/history/documents/Christiansen/Leaders

Guess I'll have to pull out

Guess I'll have to pull out my guitar and learn that song. Great lyrics and the chord structure I can handle.
Thanks for passing it on.

This has saddened me so. My

This has saddened me so. My heart is broken by the abandonment of environmental ethics and the backroom deals of "our" Federal Government. I have never been a cynic. Haven't had time for cynics. I now feel that the best I can do is drum to the sun, the moon, the forests and the seas, and join hands with the people.

Many who have said they're

Many who have said they're willing to be arrested are, I hope, being advised that the Injunction Order needs to be clarified in court before they decide what to do. In question is what terms of the Order matter and what don't.

The requirements that Trans Mountain "clearly mark and delineate" its property lines and "post copies of the injunction Order on or around the Trans Mountain sites" have been dismissed by the court. Also dismissed is the fact that the 5-metre Buffer Zone is missing in front of the main gate at the Burnaby Terminal -- it can't exist on private property, public trail, or public road, and that's all there is at that site.

The only term of the Order said to matter is that protesters were "obstructing, impeding, or otherwise preventing access by Trans Mountain, its contractors, employees or agents, to, or work in, any of the sites ...."

Except, no TM representatives showed up on the days that most of the 200+ arrests took place at the terminal main gate. In question is *actus reus*, or the need for actual objects and/or people to be involved in physical transgressions.

Will new case law be set, with phantom confrontations being enough for conviction? If so, what precedence will that set for all future Canadian protests and strikes?

Until these concerns are addressed in court, by which more clear contempt-of-court case law can be set, the court's upping the penalties to jail time seems more tactical than substantive. Those willing to be arrested are perhaps being tactical, as well, waiting for greater certainty in law.

Wait how long? Trials for those pleading guilty -- i.e. seeking to settle the legalities at stake -- are set for the week beginning July 30th, although they could be delayed until late October.

We might wonder a great deal about the Injunction Order, as it's written and being interpreted -- with opt-out terms for Trans Mountain and its non-existent representatives at the arrest site -- but this is where we're at, with no resolution for a while yet.

well, if we are going to get

well, if we are going to get arrested to test the validity of the law and the injunction itself, then we will need some good lawyers...maybe some from the human rights sector, working pro bono??? that would be nice...if we indeed are fighting for more than a cleaner planet...and human rights to dissent.