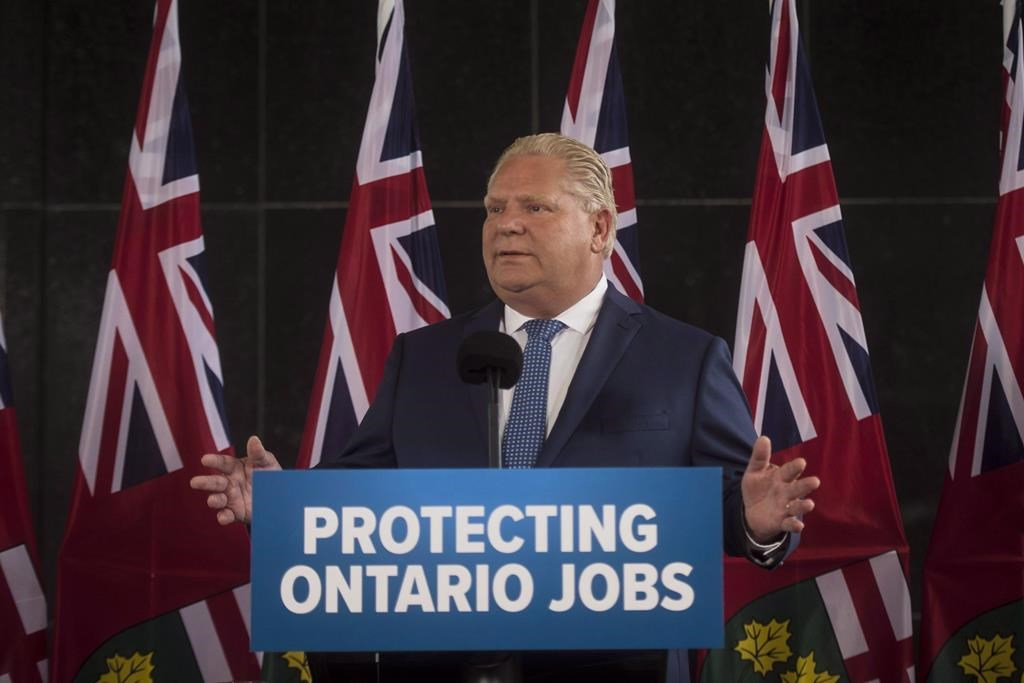 Ontario premier-designate Doug Ford speaks to the media following a meeting with industry representatives in Toronto on June 13, 2018. Photo by The Canadian Press / Tijana Martin
Previous story
Next story

Ontarians are losing access to thousands of dollars in rebates to help renovate their homes and make them more efficient.

A not-for-profit created by the former Liberal government called the Green Ontario Fund, or Green ON, to help homes and businesses lower their energy costs while tackling climate change, is winding down.

The agency offered rebates of up to thousands of dollars for new insulation, replacement windows, solar installations, heat pumps and smart thermostats. On Tuesday, Green ON’s website announced that it had closed all its rebate programs as well as other activity.

It said rebates would still be honoured if Ontarians had signed work agreements for work to be finished by Aug. 31, and the rebate application is submitted by Sept. 30.

Harper's then-natural resources minister, Gary Lunn, justified the decision at the time by saying "we are going to ensure that every single Canadian taxpayer gets value for their money."

The announcement on Green ON's website Tuesday came after Ontario premier-designate Doug Ford said on Friday that he was immediately abandoning the province’s price on pollution, its cap and trade carbon market.

"We're going to stop the government from gouging the people," he said in justifying his decision.

The Green Ontario Fund was funded entirely by revenue, roughly $3 billion so far, generated from that carbon market. But the Ford campaign labelled Green ON a “slush fund” and said it would scrap it if elected.

Federal Environment and Climate Change Minister Catherine McKenna tweeted that the decision to close Green ON was "disappointing."

"Clearly he (Ford) doesn’t care about climate action or helping families and businesses save money and supporting innovative Ontario businesses and jobs," she wrote.

Ontario Green Party Leader Mike Schreiner also reacted to the announcement, saying Ford was making it harder for people to save money.

“I’ve already received emails and calls from business owners angry that Ford’s reckless actions will force them to fire staff and lose money," said Schreiner in a statement.

“Mr. Ford has declared war on businesses creating jobs that are good for the environment and that help people save money by saving energy."

Ontario’s buildings generate close to a quarter of its carbon pollution, according to the province. The fund is part of the province’s climate change plan to cut pollution 15 per cent below 1990 levels by 2020.

Ford, who is expected to be sworn in as premier on June 29, said getting rid of cap and trade would be his first order of business once the legislature resumes.

It's unclear how the premier-designate intends to significantly reduce Ontario’s carbon pollution, without either a price on pollution or a program to make Ontario buildings pollute less.

The Green Ontario Fund was also supporting the "Green ON challenge,” which invested in low-carbon projects. That, too, was on the chopping block as of Tuesday.

Alberta Premier Rachel Notley said this week she's expecting to have some "interesting conversations" with Ford about climate change policies.

Ford also announced he was freezing the bulk of public service hiring, canceling its subscriptions and restricting its travel as part of belt-tightening.

He said Tuesday that he was going to have a "frank discussion with the oil companies" about gas prices.

Ford said he expects gasoline vendors — which are not necessarily related to oil extraction companies — to pass on the expected savings from his government's nixing of the price on carbon.

Gas prices are the product of marketplace supply and demand, which often spikes on weekends and in the summer as people drive more. It's unclear how Ford intends to influence them outside of regulation.

On Tuesday, he ruled out that option, saying "I'm not going to control that."

By Fatima Syed | News, Energy, Politics | June 18th 2018
Reports from the Race to a Safer World

Unfortunate that Ontario voters are following the trend of voting while wearing blinkers - never looking to one side or the other, but only seeing what they think will be their short term gain. I am very much afraid that Albertans will fall into the same trap next year.